VA Innovation: Here’s an idea that won’t keep you awake at night 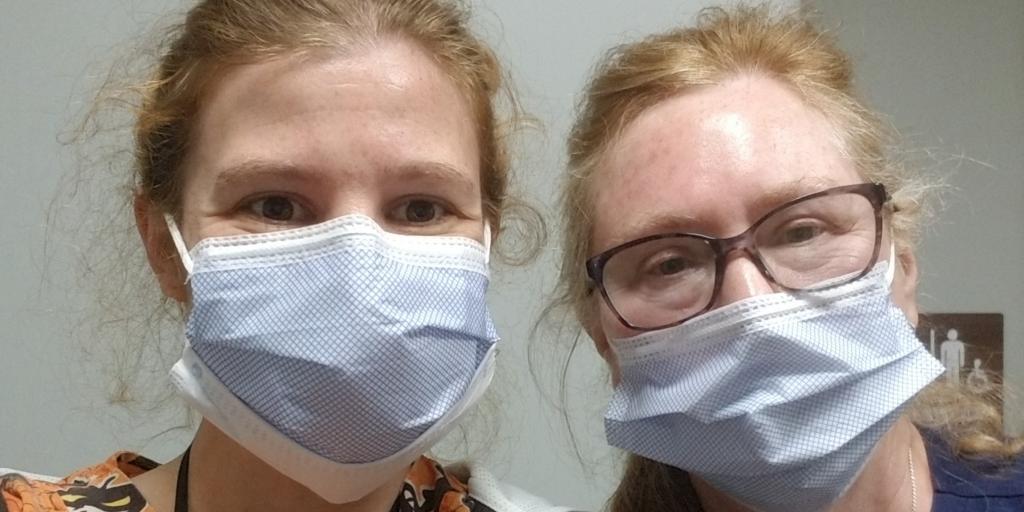 From left, Krys Earles, Registered Nurse, and Debra “Cindy” Peters, RN, from the Western North Carolina VA Health Care System have been working with the idea to use a white noise machine to drown out undesirable noises in hospitals to to improve their their patients' sleep and to decrease their anxiety.
By Vance Janes, Public Affairs Officer
August 24, 2021

Let’s face it – for most people, it’s hard to sleep in a hospital. That’s because it’s an unfamiliar setting with unfamiliar people and unfamiliar sounds all around you. Couple that with the stress of being treated, and it makes the perfect recipe for a lack of restful sleep.

ASHEVILLE, NC – Let’s face it – for most people, it’s hard to sleep in a hospital.

That’s because it’s an unfamiliar setting with unfamiliar people and unfamiliar sounds all around you. Couple that with the stress of being treated, and it makes the perfect recipe for a lack of restful sleep.

Well, two of the registered nurses at the Western North Carolina VA Health Care System decided to do something about it.   Debra “Cindy” Peters, a registered nurse at Charles George VA Medical Center in Asheville, came up with the idea to use a white noise machine to drown out some of those undesirable noises going on around  patients to improve their sleep and to decrease anxiety.  Her coworker, Krys Earles, a registered nurse from CGVAMC Warriors Recovery Unit, assisted with implementing the project and is collecting data.

They did this as part of a fiscal 2021 Spark Investment and, in doing so, they received $1,400 to spread the White Noise Project to other areas of the hospital and to add more speakers to the Warriors Recovery Unit, the Inpatient Mental Health Unit.

Peters said she initially came up with the idea in 2019.

“In 2019 while I was still a part of the Weekend/Holiday/Evening/Night (WHEN) and Clinical Inquiry and Research councils, staff on the WHEN Council would identify issues that impacted their nursing practice and veterans,” she said. “At home, I was researching ways to help facilitate sleep in a more holistic approach.”

That’s when she said she came across an article about masking sound being incorporated into the designs of new hospitals and its positive outcomes including increased privacy and better sleep.

“Patients often report a hard time sleeping in hospitals due to the natural increases in unfamiliar noise on hospital units – from beeping machines, to doors opening and closing,” she said. “Sleep is well documented to be vital in healing and recovery as well. After further research, in the fall of 2019, I submitted an Item for Consideration with the Clinical Inquiry and Research Council for the use of white noise machines to improve sleep, anxiety and privacy.”

The idea had initial approval, and the Warriors Recovery Unit started to implement a limited number of machines on the unit as a trial.  Initial data reflected positive outcomes that far exceeded expectations, prompting Peters to push her innovative approach even further.

“In August of 2020, I presented a pitch with the collected data to the Executive Leadership Team to propose rolling this project out hospital wide,” Peters said.

That’s when she recruited Earles  to help. In September 2020, the two were given the news that the VHA Innovators Network, or iNET, was awarding support and funding for the project to move forward as part of the Spark-Seed-Spread Innovation Investment Program.

Although research is ongoing, and the final data won’t wrap up until October, the results are promising.

“Since going hospital-wide in January 2021, we have continued to collect and submit extremely positive results on both qualitative and quantitative data measurements for sleep, anxiety, and privacy improvement,” Peters said. “We have consistent numbers showing improvements in sleep hours of more than an hour a night difference when compared to veterans not using white noise, and over 90 percent satisfaction reports.”

There have even been veterans who have shared their experiences. One veteran came to the nurse’s station and said he was having a hard time sleeping. The staff asked if he slept with a fan at home and he said he did – every night.  That’s when they offered him one of the white noise machines.

“The next morning, he said the machine had ‘brought [him] a feeling of safety and peace’,” Peters said. “[He said it reminded him] of when he was at his grandmother’s home because the ‘noise sounded like it was her old furnace.’”

Another veteran said that he too had slept quite well.

“I had the best sleep,” he reported. “I thought I was at the beach, very relaxing.”

The white noise machines have also been found to be helpful in other medical treatments.

With dementia patients, white noise has been implemented as part of gentle non-medication interventions to help assist with agitation and difficulty falling asleep successfully.

“We also see this as a win for less medication intervention and fall prevention,” Peters said. “Overall, this project has been a labor of love, and we are happy to see real data results to provide an effective alternative solution for our veterans that encompasses a holistic approach to care, provides comforts of home when they are away, and facilitates healing in the hospital.”

Editor’s note: Peters and Earles have recently applied for further support from iNET’s Spark-Seed-Spread Program as “Spread” applicants in the hopes to diffuse the successful project to two other VA Medical Centers. Having already successfully pitched to local leadership, they have recently found out their idea is advancing to the next round of review and selection at the national level.