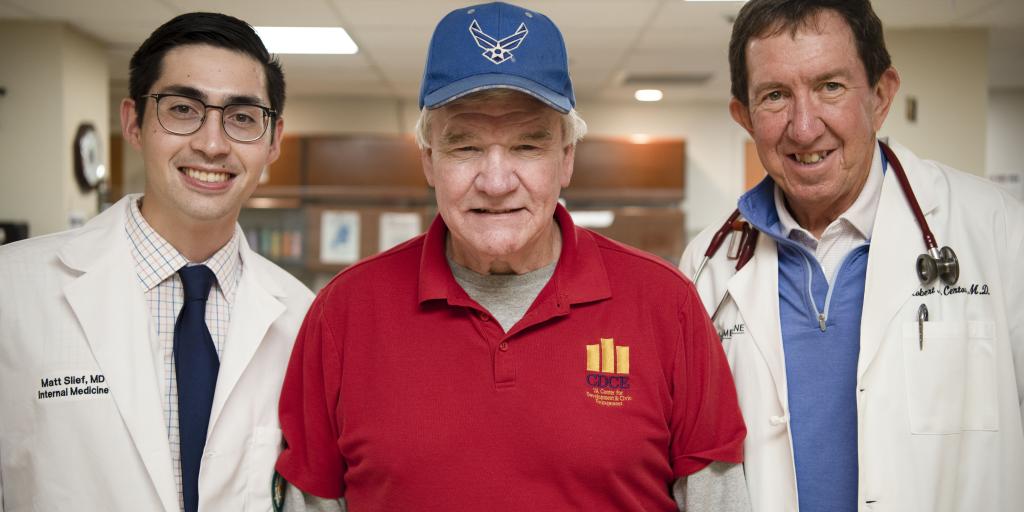 A physician resident training at the Birmingham VA Health Care System is credited with a lifechanging discovery.

University of Alabama at Birmingham (UAB) Physician Resident Dr. Matt Slief discovered an obscure diagnosis that resolved refractory orthostatic hypotension in a Veteran patient at the Birmingham VA - As featured in the New York Times article, “When he stood up quickly, he sometimes fainted. What was it?” written by Dr. Lisa Sanders.

U.S. Air Force Veteran, James Kent, was experiencing frequent lightheadedness when he would stand up, almost to the point of fainting. One day while working as a volunteer at the Birmingham VA, he experienced a severe episode and was rushed to the emergency department where he was treated for orthostatic hypotension - a health issue which leads to inadequate blood flow to the brain when someone stands up. He was familiar with the diagnosis as he had been suffering from this condition for several years, but only recently was it getting worse. The treatments Kent had been given for his orthostatic hypotension were not working like they should have, deeming his case a mystery.

Dr. Robert Centor, Attending Physician at the Birmingham VA, challenged his team to figure out what the underlying issue could be. Dr. Slief was up for the challenge and thoroughly reviewed the patient’s history. He then presented a potential cause and solution to Dr. Centor that was highly unusual. The solution would be to remove a filter in the main vein - the inferior vena cava - that was placed in the patient 15 years ago to block blood clots from reaching the lungs. Dr. Slief reasoned that the filter caught the clots as intended, but in doing so, a blockage occurred over time and prevented blood from returning to the heart when the Veteran stood up.

“I thought it was a very interesting idea,” said Dr. Centor. “I’ve never heard of a case like this before, but I told him let’s explore it.”

As a potential solution however, there was not a way to prove the hypothesis until the filter was removed and the results confirmed effective.

“We knew his symptoms of orthostatic hypotension were interfering with his life without much relief from treatment,” said Dr. Slief. “The solution to remove this filter was rare and unheard of, but it seemed to be our most likely solution for Mr. Kent.”

“Once we had the idea, we confirmed it as the likely problem by using imaging with ultrasound and then CT scanning that showed no blood was flowing in the inferior vena cava above the filter,” said Dr. Centor. “These studies were necessary before the surgeon would agree to the complex procedure.”

After hearing about the possible solution to his health problem, Kent was on board to follow through with the surgery. Dr. Bill Parkhurst, a surgeon at UAB, specializes in this kind of procedure and agreed to move forward with the operation.

“It worked!” said Kent. “I am feeling 100% better and I am eternally grateful for Dr. Slief for finding what the problem was. I could not be happier with the team of physicians who cared for me, including Dr. Centor and Dr. Parkhurst.”

Kent is now living his life with little to no symptoms of orthostatic hypotension, thanks to the physicians at the Birmingham VA and UAB for working together as a team to solve a rather unusual case.

“I’m proud of Dr. Slief for thinking outside of the box,” said Dr. Centor. “Being able to help someone in situations like Mr. Kent, is the greatest pleasure of being a physician.”

Dr. Centor said they plan to publish a medical report about this rare orthostatic hypotension case for other medical professionals to learn from.

“Collectively, it was a team effort to help this Veteran,” said Dr. Slief. “Most importantly, the Veteran is back to living his life and has regained some of the things that his orthostatic hypotension has taken away from him for years. The recognition by the New York Times was just icing on the cake.”