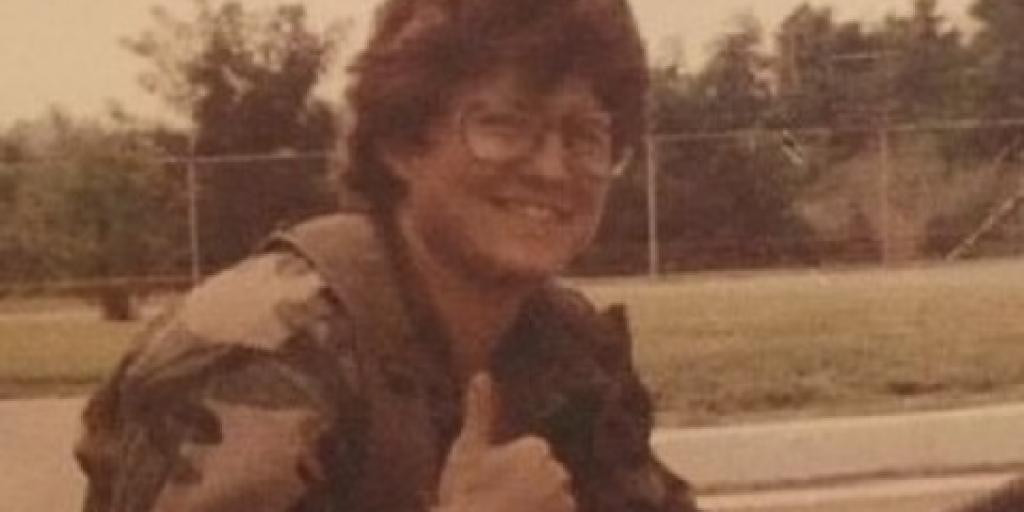 “I am a military sexual trauma (MST) survivor. That is one of the ways the military changed me, but I choose to look at the positive things it did for me." - Laurie Kubli
June 21, 2021

During her first year of service in the Army, Laurie experienced what no one should ever experience. “I am a military sexual trauma (MST) survivor."

"We have to get used to the idea that at the most important crossroads in our life there are no signs.” – Ernest Hemingway

Laurie Kubli grew up in Swissvale, a borough just east of Pittsburgh, Pennsylvania.  Her dad was a Navy Veteran and she was the fourth of five children. “I grew up watching and hearing stories about the Vietnam War.  I played Army in the woods behind my house with the neighborhood boys.  I guess that is where my interest in the military began,” comments Laurie.  She notes that of her siblings, she is the only one who is a Veteran and the only one to hold two masters’ degrees.

Like most people in their early 20’s, Laurie was at a crossroads of what to do with her life.  She narrowed her choices down to teacher, novelist or soldier.  “Teaching jobs in Pennsylvania were scarce at the time and I wasn’t too sure about being a novelist.  So, I decided to try the Army,” states Laurie.  She took the military entrance exam, scoring in the top 3% of examinees.  On September 1, 1989, she reported to Fort McClellan, Alabama.

Following boot camp, Laurie was offered an opportunity to go into military intelligence. However, that would have required going to California for a year and extending her enlistment an additional two years.  Laurie had signed up for four years and didn’t want to commit to something she wasn’t sure about.  She ultimately decided to stay with the job assignment she had originally selected as a Land Combat Support System (LCSS) Test Specialist. An LCSS is an electronic, computerized test system designed to keep missiles functioning properly.  The TOW (tube-launched, optical-sighted, wire-guided missile) was the one Laurie worked on frequently, most notably during Desert Storm.

After being stationed in Alabama for almost three years, Laurie decided to request an overseas assignment.  While many prefer to stay stateside, she was eager to see other parts of the world.  In May 1992, she received orders to Korea. “Being a foreigner in a foreign land was challenging to say the least. It was a unique experience for me, but I enjoyed it.”

Near the end of her tour in Korea, Laurie applied for an early discharge so that she could return to college.  Not long after, she was on her way to the United States and back to Pennsylvania.  Laurie started working on her master’s in education at Slippery Rock University and would go on to receive a second master’s degree in Social Work from the University of Pittsburgh.  Laurie was employed as a Child Protective Services Caseworker for Butler County, Pennsylvania, for 20 years and was also a mobile therapist.

“I am somewhat of an adventurer and was always looking for a challenge.  The Army was certainly that for me.  Things happened that I did not expect and was not prepared for.  At times I regretted joining and wondering how I would survive the four years,” notes Laurie.  But she did.  Laurie completed her obligation and went on to serve three additional years in the Pennsylvania National Guard as a light-wheeled vehicle mechanic.

During her first year of service in the Army, Laurie experienced what no one should ever experience. “I am a military sexual trauma (MST) survivor.  That is one of the ways the military changed me, but I choose to look at the positive things it did for me.  I became more aware of myself, the importance of living a productive life and working towards meaningful goals.  I am a very service-oriented person and believe in living a purposeful life doing things for others.”  The trauma has not prevented her from living life to the fullest and being the best person she can be.

Looking back, Laurie notes one regret, “Before I enlisted in the Army, I had a college degree and that had made me eligible to apply to Officer Candidate School (OCS).  I had completed most of the application, but at the last moment chickened out.  Thinking on it now, I realize that the reason I didn’t apply and the reason for some of my decisions early on, was that I was afraid to fail.” Today, Laurie views failure as a part of life that enhances ones’ experiences and opens doors to new adventures.

Laurie is also an author.  Ten years ago, she self-published a novel under the pen name Laurie J. Tiger entitled The Burn: Fire in the Wind and A Shot in the Dark.  The first part of the novel was written prior to her military service and the second part after.  She is currently working on her second novel.

Laurie enrolled in the Butler VA Health Care System in 2013 at the advice of a friend.  “I had lost my health care coverage and needed care. The VA rescued me. I would have been lost without the VA and I appreciate everyone there who has helped me get through some difficult times.”

Laurie, the Butler VA salutes and applauds your service and your courage.  And you are not alone.  Anyone can experience MST; the Butler VA is here to help.

If you are a Veteran and want to learn more about Military Sexual Trauma services, call the Butler VA at 742-287-4781 and ask to speak with the MST Coordinator or talk with a VA health care provider. You can learn more at www.mentalhealth.va.gov/msthome or contact a local Vet Center at https://www.vetcenter.va.gov.

If you are in crisis and need immediate assistance, connect with the Veterans Crisis Line 24/7 by calling 1-800-273-8255 and pressing 1, texting to 838255, or chatting online at VeteransCrisisLine.net/Chat. You will reach a caring, qualified VA responder — many of them Veterans themselves.