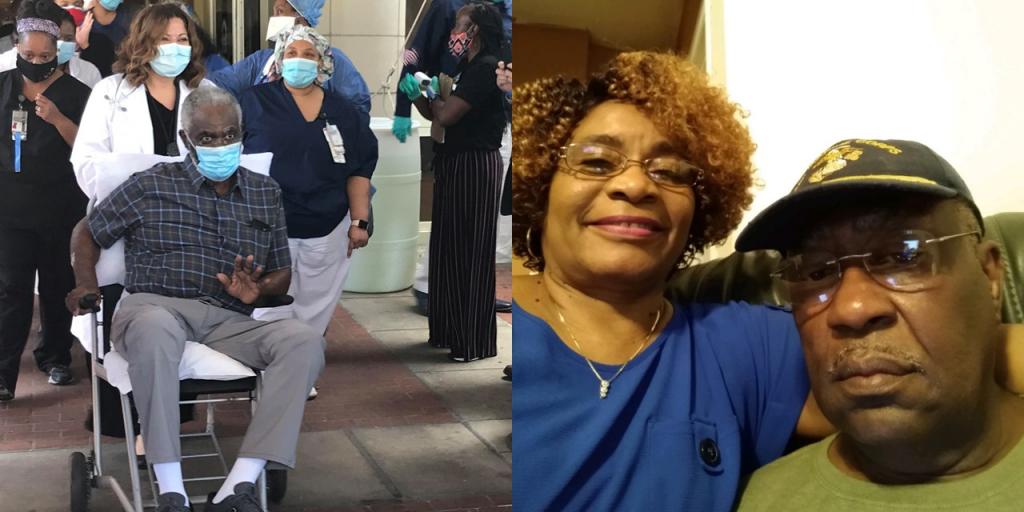 Robert Shaw was the first CAVHCS Veteran released after contracting COVID-19. He was discharged on April 30, 2020, after a 40-day hospital stay. Shaw and his wife Valencia are very thankful to be alive dealing with COVID-19.
By Tramel Garrett, Public Affairs Specialist
August 30, 2021

He began to feel sick in early March 2020. He thought it was something simple, such as a sinus infection and visited a nearby urgent care physician. He would see a doctor on multiple trips and would receive sinus medication. Unfortunately, this sinus infection just would not go away.

Shaw would make one more trip and again, everything was normal, and he received more medication to deal with his sinuses. He took his medicine, but he realized something was different. He could not get his sinuses in check.

Shaw, a Marine Corps and Vietnam Veteran, decided to go to an emergency room and received more sinus medication. He was sure the medicine would work this time, but things took a turn. Later that evening, he started coughing and his wife Valencia became concerned. She decided to call the VA for help.

“The VA told me to check his temperature to see if he was running a fever and he was not. I was told to keep checking. The next morning, his temperature was 102 degrees,” Valencia Shaw said. “This is when we immediately drove to the Montgomery VA Emergency Room.”

A Hard Battle Ahead

VA performed several tests and found Shaw had pneumonia and admitted him to the Montgomery Campus. Shaw’s COVID-19 test results came back positive, but he was already intubated due to the deterioration of his respiratory status.

The CAVHCS medical team immediately got in touch with Valencia and informed her of the diagnosis. She would also speak with her doctors and begin her 14-day quarantine.

The stress was hitting Valencia hard. COVID-19 was all over the news and began to hit America fast and viciously. All she could do was pray. She talked to her church and family members to try to keep it together during those challenging times.

“It was a terrifying moment. It [COVID-19} really just started but people were dying. The VA doctors were excellent and kept in contact with me every day,” said Valencia. “They called me to let me know how he was doing and he wasn’t doing good.”

Valencia would also be diagnosed with COVID-19 along with her son Eric and daughter-in-law, Rhokela.

“My son went to the hospital two or three times but his wife was in the ICU,” Valencia said. “She also was put on a ventilator at Russell Medical Center in Alexander city.”

Shaw’s daughter-in-law would pass away due to COVID-19 complications. This hit the Shaw family hard. COVID-19 had taken a family member. To make things worse, they had to endure a gravesite service because of restrictions.

While at the site, Valencia’s phone kept ringing. She initially ignored the calls and tried to focus on saying goodbye to her daughter-in-law. Eventually, she answered and it was the VA. Robert Shaw was taken off the ventilator. What began as a dark day showed light at the end of the tunnel.

After leaving the VA hospital, Shaw would need to go to an acute rehabilitation facility. After he was released from the hospital, Shaw stated his doctors were concerned about the blood clots in his lungs.

He would be placed on medication for six months to remedy this issue. However, the effects of COVID-19 didn’t stop there.

“One Sunday after we ate dinner and I could tell he wasn’t feeling well,” said Valencia. “The next morning, I took him to the doctor and that’s when we found out he had gallbladder problems.”

Shaw would spend another week at a hospital. He was still weak from COVID-19 and had to build his strength before surgery. His gallbladder was removed and he is now paralyzed on one side of his vocal cords.

“I went through a lot. There are things I don’t remember. For example, I talked to my pastor before I went on the ventilator and I don’t recall that,” Shaw said.

Shaw is very thankful to be alive after 20 days on a ventilator and is very transparent about the struggles of the aftermath of dealing with COVID-19. He was discharged on April 30, 2020, after a 40-day hospital stay.

Shaw explains how VA took care of him in the early stages of the COVID-19 pandemic. “VA didn’t know a lot about COVID-19 then but they did everything they could and they really care about you,” Shaw said.

“I advise people to get the vaccine. You don’t want to go through COVID-19. Things have been up and down, but I’m doing good,” said Shaw.