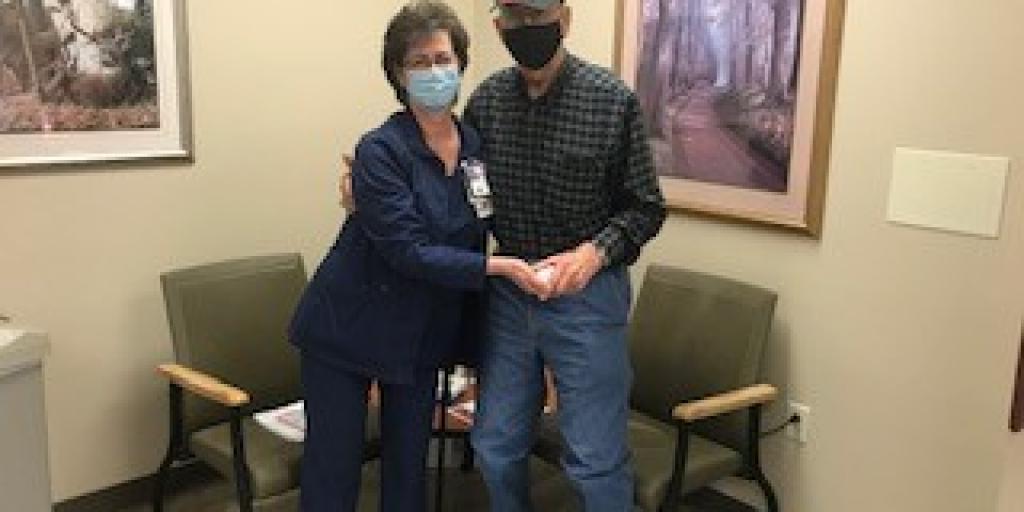 How many people can say they survived the sinking of a ship in war time?  Not many in Mr. Grimes' case.  He is one of 195 WWII sailors who made it back after the USS Liscome Bay (CVE 56) was torpedoed by a Japanese submarine on November 24, 1943.  More than 600 men lost their lives, the deadliest sinking of an aircraft carrier in the history of the U.S. Navy.

The humble and still spry Mr. Grimes was visiting our Conway Community Based Outpatient Clinic (CBOC) recently for an appointment when he received a surprise.  His long-time friend Vicky Emmons, an eye clinic health technician at the Conway CBOC presented him with a special CAVHS coin in honor of his WWII service and sacrifice.  It's a small but powerful token of our great thanks and appreciate for our WWII Veterans, especially people like Mr. Grimes.

He served as a Boatswain's Mate Third Class aboard the Liscome Bay while it was part of the Navy's Gilbert and Marshall Islands campaign. The carrier’s aircraft played a vital role in the Battle of Makin, providing close air support and bombing Japanese positions. On 24 November 1943, the Liscome Bay was torpedoed by a Japanese submarine which detonated the carrier’s munitions, causing the ship to quickly sink.

“We were launching planes because we knew the [Japanese] submarine was in the area; they didn’t get them all off,” he said.

When the torpedo hit, Jack said he jumped off the ship. “They said to abandon ship. I remember hitting the water and getting as far away from it as you could.

"The suction is going to take you under and that's what happened to a lot of them."