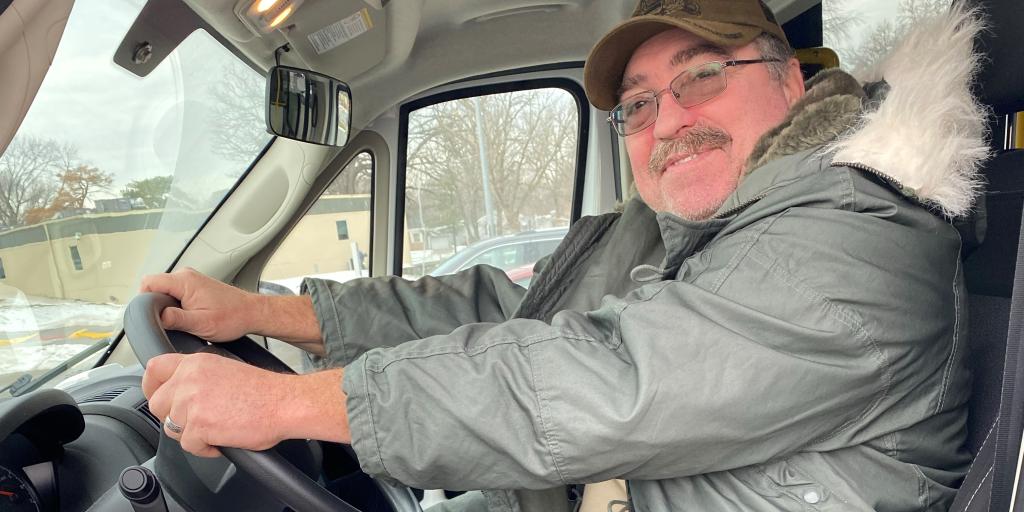 Chuck works for Veterans Transportation Service and has saved three Veteran lives during his time behind the wheel, not including Rich’s.
January 9, 2023

Rich was a patient and resident at the Community Living Center (CLC) at the Des Moines VA hospital campus and required 24/7 care. He had moved here from Nebraska as he required care that best fit services offered at the Central Iowa campus. The CLC is a long-term care facility.

Rich was a patient and resident at the Community Living Center (CLC) at the Des Moines VA hospital campus and required 24/7 care. He had moved here from Nebraska as he required care that best fit services offered at the Central Iowa campus. The CLC is a long-term care facility.

He came with a lifetime of service -- West Point education, a career as an Army Ranger, an Army recruiter, an ROTC Instructor at Creighton University, and finally, working for the Omaha VA.

Rich was a good, stable patient. Over weeks and months in the CLC, Rich and the staff built a rapport and a trusting relationship. He often offered to assist the staff. Keeping with his nature of serving others, he found enjoyment in visiting and counseling his peer Veterans -- both staff and residents.

While at the Des Moines VA, he and the VA staff worked on his health. He also focused on his family. You see, his oldest daughter, mother to five of his grandchildren, was also sick and facing a grim outlook.

Her condition understandably weighed on Rich, especially as his condition didn’t allow him to visit her. He longed to see her but could not. He would sometimes confront his caregivers and yell, “Don’t you have kids? What would you do if your kid was dying? Would you just stay here?”

CLC staff wanted to help, but they felt powerless. They had no way to assist Rich, other than to continue to support him and provide empathy.

When staff was alerted that Rich’s daughter was nearing the end, they had to act. Despite COVID and time constraints, Shari, a CLC Social Worker, organized with Veterans Transportation Service (VTS) to schedule a visit to Omaha to see his daughter. The staff knew this would likely be the last time he would have with her.

CLC care providers, nurses, social workers, and management had questions. “What is the risk of doing this? Should we even try this? Will Rich come back to Des Moines? What will his mental state be? Will this even work? Will he need to be hospitalized in Omaha?”

When the day of the trip arrived, it turned out the VTS van driver was an Army Veteran named Chuck. He and Rich connected immediately and spent the two-plus hours chatting in the front seats while Sara, his nurse, and Shari and Liz, social worker and social worker student, were accompanied in the back. The staff was nervous because of the unknowns about Rich, his daughter, and the emotional toll on everyone.

Arriving at the hospital in Omaha, Sara became keenly aware of the need for social, emotional, physical boundaries that may intrude on the meeting between father and daughter. The nurse thought it might be difficult for Rich to cope effectively with his grief and stress.

Aside from the expected tears, Rich did well, even inviting Sara into the room for proud introductions.

Back in the van, the driver Chuck, along with the staff in the backseat noticed that Rich was becoming increasingly distressed. They feared Rich was going to refuse to return to Des Moines. To diffuse the brewing situation, Chuck casually asked if he could stop at the Heartland Airbourne Memorial that honors his old Airbourne unit. The idea turned out to be a lifesaver.

At the memorial, the two veterans bonded even more deeply.

Chuck found the names he was looking for and got down on his hands and knees, full of emotion. It was then that Rich, with some difficulty, bent over and placed his hand on Chuck’s shoulder and comforted him, “I’ve got you, brother.”

It was a moving show of support, respect, and brotherhood to his fellow Veterans.

Sharyl, the social worker on the trip saw an opportunity and asked Chuck about his old unit.

“Do you keep in touch with any of these guys?” she said.

Chuck responded, “Sadly, no. I’m really the only one left.”

It turns out, some in his unit had died as a result of suicide -- one of those only recently.

The team returned to the van and traveled safely to Des Moines.

In time, Rich’s daughter passed away. Rich could not attend the services, but did view it remotely.

And then Rich also died. And time goes on.

Some time later, Chuck, the driver, was visiting Sharyl’s office and the Nebraska trip came up.

Sara asked about that memorial in Nebraska.

Chuck said, about the exchange with Rich, “Oh man. That guy pulled me out of a dark place that day. I was not in a good place. He saved me.”

Difficult to say which one of these Veterans saved the other that day. It could be said that their mutual acts of kindness and brotherhood saved each other.

It is the sort of help that only Veterans can give . . . and receive.