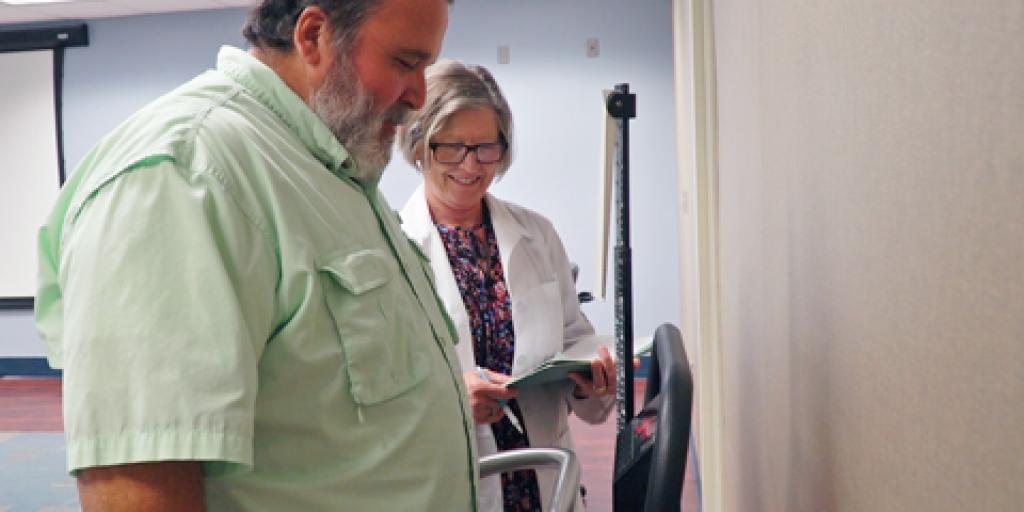 On January 8, 2019, U.S. Navy Veteran Tony Valencia made a commitment to himself. A commitment to change some unhealthy habits, refocus his life and get healthy, with a goal of one day riding on a roller coaster with his grandkids.

Valencia’s first day with the Ralph H. Johnson VA Medical Center’s MOVE! Program started with a weigh-in and at 56 years old he had hit a weight of 342 pounds. Over the years he’s taken some positive steps and quit smoking and drinking, and more recently stopped drinking soda and swore off ice cream. But what he found through the Charleston VAMC MOVE! Program is that it takes more than cutting out a few unhealthy habits to achieve his goal of losing 100 pounds by January 2020. It’s a lifestyle change.

MOVE! is a 14-week program that meets once a week at the VA to provide wellness education to enrolled Veterans and help them track their weight loss through weekly weigh-ins. Veterans learn about how to build a healthy plate, read nutrition labels, set SMART goals, practice safe physical activity, and keep a positive attitude, along with other health-focused discussions.

After months of sticking to the program, Tony’s final weigh-in had him 29 pounds lighter.

MOVE! Program Coordinator Becci Luhrs, MSN, FNP-BC, has been with him every step of the way.

“He’s a star,” said Luhrs. “He has just done a phenomenal job and I think he’s done so well because he’s followed all of the tips and tools.”

Luhrs noted that Valencia has made changes in his behavior, diet and activity, and he’s holding himself accountable with a food journal and activity log. By following the steps of the program, Valencia is achieving the goals he set for himself.

Valencia shared that he’s blown through two pairs of walking shoes in four months. He enjoys getting outside and walking the streets of downtown Charleston and parks hear his home. He’s stayed vigilant about walking two to three times a week to increase his activity levels.

Valencia refers to Charleston’s MOVE Program as his “health team – a team that has the heart and genuine desire to help people” and says he owes them his life.

Valencia plans to maintain a monthly weigh-in schedule with MOVE! to hold himself accountable and looks forward to the day when he can shout from the rooftops that he’s reached his final goal.

If you are interested in participating in the MOVE! Weight Management Program, ask your Primary Care Provider for a referral or self-refer by requesting an appointment with a dietitian.

To watch Tony’s reaction to his final weigh-in, click here.