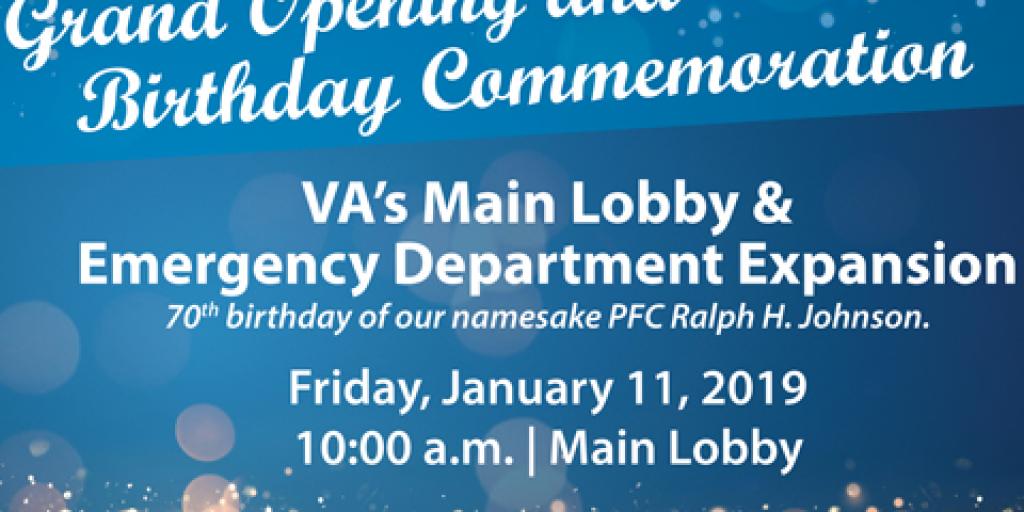 Charleston VAMC is hosting its grand opening for the VA's Main Lobby and Emergency Department Expansion as well as a celebration of Pfc. Ralph H. Johnson's 70th Birthday on Friday, Jan. 11, 2019 at 10 a.m. in the Main Lobby. Graphic by Petra Ioakeimides, Visual Information Specialist.
By Scott Pauley
January 7, 2019

The event will begin with the premiere of an animation video of Johnson, followed by a flag-folding ceremony, remarks from the medical center’s Director and CEO Scott Isaacks, and a birthday cake cutting by Johnson’s sister and family.

Pfc. Johnson was born in Charleston on Jan. 11, 1949. In 1967 he enlisted in the U.S. Marine Corps and deployed to Vietnam in 1968. During an ambush, a grenade was launched into Johnson’s two-man fighting hole. Johnson selflessly hurled his body onto the grenade and was killed saving his fellow Marines. For his heroic act, President Richard Nixon posthumously awarded Johnson with the Congressional Medal of Honor.

On Sept. 5, 1991, the Charleston VA Medical Center was formally renamed the Ralph H. Johnson VA Medical Center in honor of one of the city’s most benevolent heroes. The medical center celebrates Pfc. Johnson’s life and sacrifice on Jan. 11, 2019 – what would have been his 70th birthday.

The medical center has also completed a renovation and expansion project in the Emergency Department, adding nine new bays for a total of 18 treatment bays, including four bays that are dedicated to Mental Health and an additional 6,650 square feet. The new section of the ED will open to patients at 7 a.m. on Jan. 14.

As Charleston VAMC continues to grow, projects like these become vital in the ongoing efforts to improve Veterans’ access to care.