New portrait of namesake more than a picture 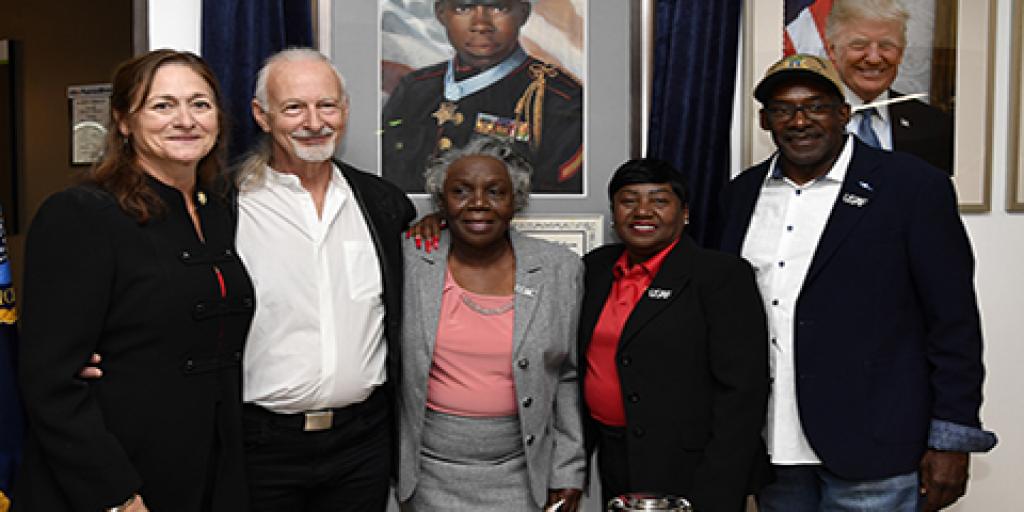 Art often has a way of moving people.

When that art is tied to the legacy of a beloved hometown hero and finally provides an accurate image of the 19-year-old Marine who gave his life in Vietnam to save his fellow Servicemembers, its creation and unveiling builds a bond of family that PFC Ralph H. Johnson, the Charleston VA’s namesake, would have been thrilled to see.

Surrounded by more than 200 Veterans, VA employees, Department of Defense representatives, Congressman Joe Cunningham and members of the community, Ralph’s sister Helen Richards, Artist Rick Austin and many family members gathered in the VA lobby for the unveiling on Jan. 31.

Charleston VA Acting Director Ronnie Smith and Congressman Joe Cunningham both noted the legacy of Ralph who received the Congressional Medal of Honor posthumously after making the ultimate sacrifice by throwing himself on a grenade to save his fellow Marines in Vietnam in 1969. Two of those Marines, Lt. Patrick “Clebe” McClary and Alex Colvin, who were injured in the blast were present for the ceremony.

As the curtain was pulled back, Austin, who painted the portrait, embraced Richards while the tears flowed as this fitting tribute took its rightful place in the VA medical center lobby.

“That is Ralph,” said Richards. “It looks just like him.”

While the original portrait of PFC Johnson that was dedicated when the Charleston VAMC was renamed the Ralph H. Johnson VA Medical Center in September 1991 is a beautiful artistic rendering, it was brought to Charleston VAMC’s attention during the March 2018 commissioning of the USS Ralph Johnson that the image was not a true likeness of PFC Johnson. Through events leading up to the commissioning, the Johnson family received a copy of his official enlistment photo. Once that photo was shared with the medical center, the VA began working with the Johnson family to find an artist who would paint a portrait in PFC Johnson’s true likeness.

That artist is Rick Austin of Folly Beach, SC, a Vietnam-era Navy Veteran and Charleston VA patient who volunteered to teach art therapy to his fellow Veterans and was instead enlisted by Voluntary Service to paint the portrait.

Austin worked closely with the family and the VAMC for more than six months devoting 800 hours to create an accurate work of art in PFC Johnson’s image. He says it has been an honor to create the portrait and to work with the family to honor Ralph’s legacy.

“Ralph and I have become very good friends,” Austin said during the dedication ceremony. “He has talked to me a lot. Hopefully his portrait will speak to you.” He added that coming to the Charleston VA has been like coming home for him, finding fellow Veterans with common experiences. Richards said Austin and his girlfriend Diana are now part of Ralph’s family.

“It was so important to me to have an accurate portrait and I can’t thank Rick and the VA enough,” said Richards.