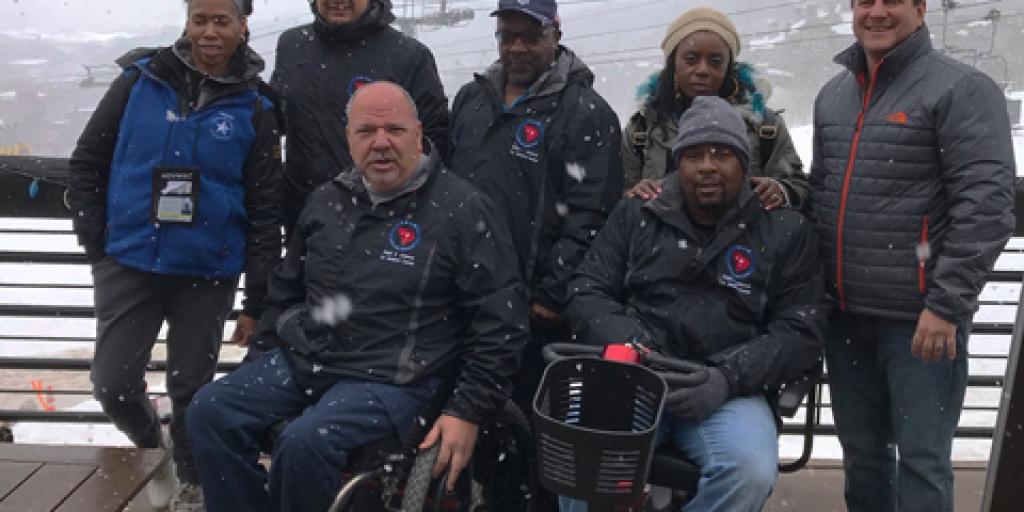 An attitude can make all the difference in the world.

It changes how you approach each day and it directs how you face challenges. Veterans with disabilities face daily obstacles, but with a positive outlook and an adaptive sports program hosted by the Veterans Health Administration – Veterans are accomplishing astonishing feats.

This year, Ralph H. Johnson VA Medical Center sponsored four Veterans to attend the National Disabled Veterans Winter Sports Clinic in Aspen, Colorado, during the first week of April. This annual adaptive sport clinic gives profoundly disabled Veterans an opportunity for self-development and challenge through education, sports and leisure. At the event, Veterans are taught how to ski with adaptive equipment and guides, if needed, and introduced to other adaptive activities. The end goal is to support the Veteran’s healing of body and spirit and empower them to lead an active and healthy lifestyle while improving their independence.

“This year I did not fall the whole week, not once until the very last day,” said Cooler. “Whenever I go up the mountain, I always feel like I can go higher.”

This year he also went from using two guides to one guide to help navigate the slopes, gaining more independence down the mountain.

“Adaptive sports opened up my eyes and let me know I can do anything I want to do,” said Cooler.

While Cooler has been to the clinic several times, he was excited to attend as part of Team Charleston this year.

“This was the first year we had a team and a coach,” said Cooler. “In the past, we didn’t even know other Charleston VA people were going. We were looking out for each other.”

First-year coach Iayne Brown is a Charleston VAMC Physical Therapy Assistant and volunteered to coach the 2019 team of Veterans.

“It was rewarding to see the whole thing come together and to see the Veterans being able to experience success at the clinic,” said Brown.

During their time in Colorado, the team gathered for dinner with Charleston VAMC Director Scott Isaacks, who was volunteering as a boot loader at the clinic. Brown shares that the Veterans were celebrating each other’s accomplishments and were noticeably proud of their own achievements.

“It was so nice to see the Veterans supporting each other,” said Brown.

U.S. Marine Corps Veteran and Charleston VAMC Chief of Prosthetics David Bradbury attended as an athlete. Bradbury has a spinal cord injury and is wheelchair bound. He’s been to the event several times, but this year he was able to have a different experience. Unable to ski this year, Bradbury was able to participate in two events he’d never tried before – archery and curling.

“Archery was a great experience,” said Bradbury. “I’ve never picked up a bow a day in my life. With my second arrow I hit a bullseye. That was a pretty good feeling.”

Bradbury and Cooler were able to fish alongside each other on what Bradbury describes as a “absolutely beautiful day.” The rainbow trout they caught in the morning were being fileted on the spot and that is what the Veterans ate for lunch that day.

“I caught two fish at one time – that was the highlight of my year,” said Cooler, who grew up fishing with his father.

Coach Brown said watching Cooler catch those two fish and having a first-time participant call her to tell her he had an “awesome day” are the two memories that stand out the most.

“Overall, I’m extremely happy that I volunteered, and I definitely got out more than I thought,” said Brown.

Brown plans to return next year as the team coach and hopes that more Veterans will come join Team Charleston at the Winter Sports Clinic.