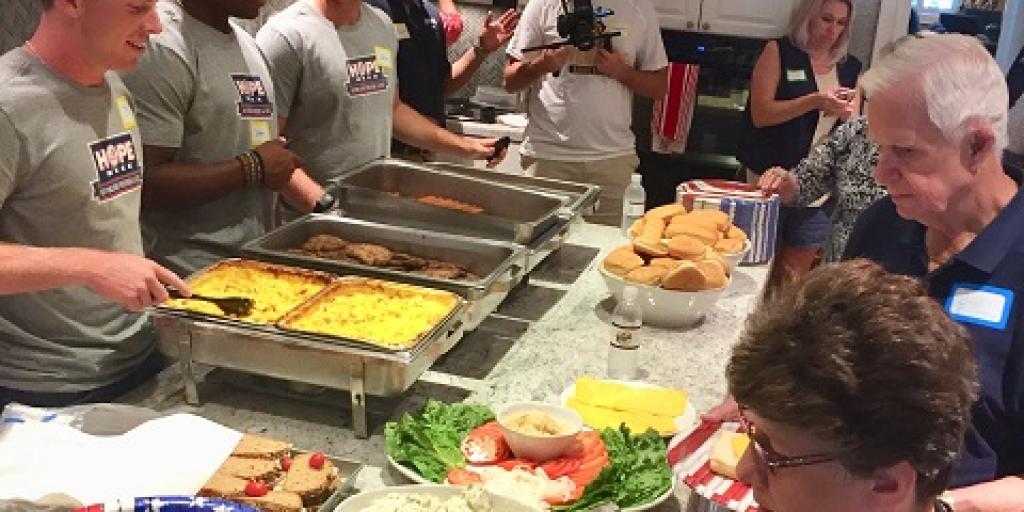 Hope can seem scarce when serious medical issues occur, but that’s exactly what the Charleston RiverDogs brought to Veterans and families at Fisher House Charleston on June 14 as they celebrated HOPE Week 2018.

An initiative of their parent team, the New York Yankees, the HOPE Week Initiative stands for Helping Others Persevere and Excel.  The week-long community service effort brings the RiverDogs to serve a specific organization each day, June 11 – 17, recognizing those organizations for their hard work and dedication to the Charleston community.

“We wanted to do something for those who have served our country.  We live in a very active military community, and we felt like the Fisher House was the perfect place to do that,” explained RiverDogs Director of Community Relations Nolan-Cohn.

The day was filled with hamburgers, hot dogs, games and, of course, baseball. Players served lunch to current and former Fisher House guests, pitched balls with children and visitors on the back lawn, and thanked each Veteran for their service. Pitcher J.P. Seers, a native of Sumter, SC and Citadel graduate, said being at Fisher House with the Veterans and their families was particularly special to him, adding how much he appreciates the sacrifices they have made.

“We are so excited to have the RiverDogs with us,” said Fisher House Charleston Manager Vicki Johnson. “The great folks over at Riverdogs reached out, told us about the initiative and wanted to do something for Veterans and families staying here at Fisher House so we planned a fun day here.”

And the fun did not stop when the players headed out for the ball park! Later that evening, the RiverDogs hosted Military Appreciation Night, honoring Fisher House Charleston and all current military and Veteran service members with complimentary tickets to the game.

Retired Army Veteran and former Fisher House Charleston guest Terry Truett threw out the first pitch to get things underway. The Ralph H. Johnson VA Medical Center outreach team and staff from Fisher House Charleston hosted an information booth at the stadium, and Veterans and families were honored by the RiverDogs before the game.

Then, the Fisher House Charleston crew and more than 4,900 other fans cheered the RiverDogs on as they defeated the Asheville Tourists 2-1. A great way to end a home-run kind of a day!