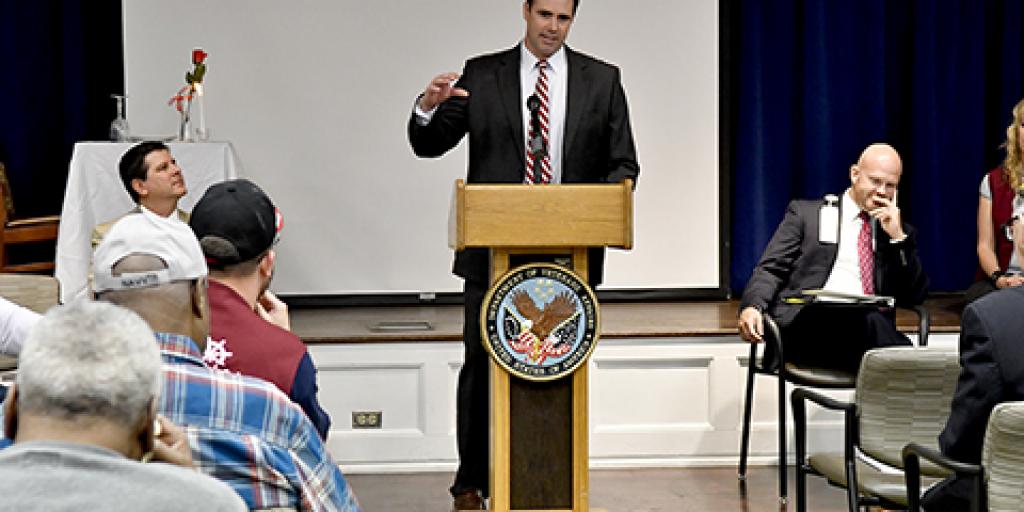 Friends of Fisher House Charleston President Maj. Joshua Strimple, U.S. Army Reserve paid tribute to the more than 650,000 Veterans who have died in battle while sharing his own poignant story of service during his keynote address at a Memorial Day ceremony held May 25.

Friends of Fisher House Charleston President Maj. Joshua Strimple, U.S. Army Reserve paid tribute to the more than 650,000 Veterans who have died in battle while sharing his own poignant story of service during his keynote address at a Memorial Day ceremony held May 25 at the Ralph H. Johnson VA Medical Center.

While Strimple began his remarks declaring service members “did not fail us and we must not fail them,” he quickly turned to self-deprecating humor, telling the story of a “very arrogant 25-year-old” whose world changed as he listened to his older brother, a Soldier in the U.S. Army, and his buddies telling war stories of their deployment to Afghanistan in 2001.

“I was really interested in the politics of it (Global War on Terrorism), and they were only interested in serving and that they and their buddies got back safely,” said Strimple.  Over the next few days, he recalls feeling an overwhelming sense of shame that led him to enlist in the Army Reserves.

“I was just living life, doing what I wanted to do,” said Strimple, who admitted that while he did not agree with the politics of the war, it was the call to duty that outweighed everything else for him.

He talked about humbling experiences during boot camp – like the time he recommended to the drill sergeant that they use Round Up instead of pulling weeds – saying, “when you let your pride kind of get out of the way you can really grow a lot as a person” as the audience roared with laughter.

Strimple, who deployed to Iraq serving in Operation New Dawn 2010 – 2011, talked little of his own combat experience. But the impact on his life was reflected in his recollection of the four friends who served that he has since lost to suicide.

What was most apparent, though, was his transformation from self-proclaimed arrogant young person to thoughtful Soldier, husband and father determined to care for those who have sacrificed greatly for our country. While serving in the Army Reserve, Strimple founded the Charleston Classic, a golf and tennis tournament that supports the national Wounded Warrior Project. Today, he serves as President of Friends of Fisher House Charleston, a non-profit that supports day-to-day operations of this VA’s Fisher House.

He closed remembering the lone USO volunteer in the airport who shouted, “Make way … Service member coming,” when he returned from Iraq. In a special nod to Vietnam Veterans, he said, “I wish all of our Veterans had had that experience, but we’re learning.”