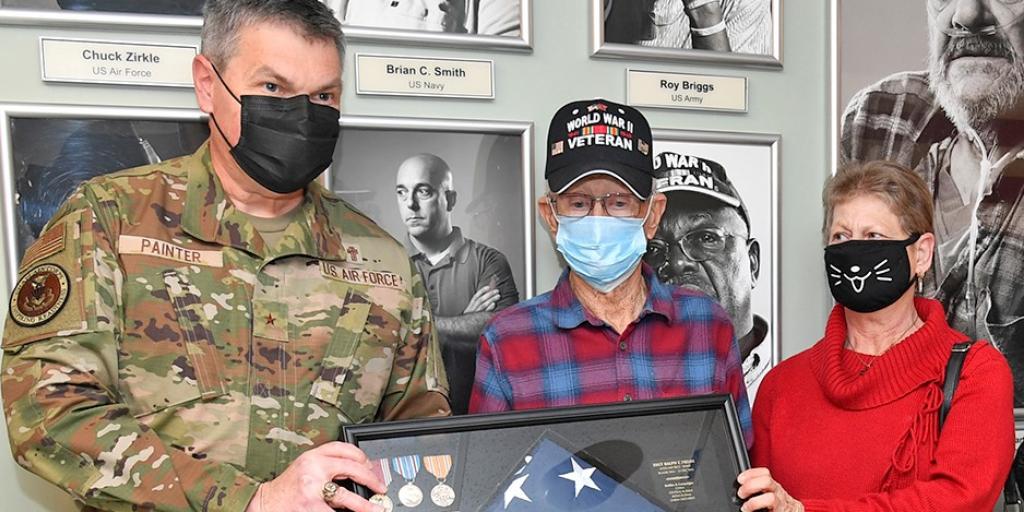 To honor Fields extraordinary service to his country, the following synopsis outlines his incredible journey from working on a farm to fighting in the jungles of Asia behind enemy lines.

Ralph Fields, who joined the famous and decorated Merrill’s Marauders late in 1943, entered into service in March 1943 at Fort McPherson, Georgia. Prior to his enlistment, he worked on a farm in Texas where he gained valuable horseback experience. His prior equestrian experience allowed him to train at Ft. Riley, Kansas to be in the Army’s 29th Cavalry Regiment, which was later deactivated in 1944.

During his time in the Army, Fields was promoted in just 18-months from a Private First Class to a Staff Sergeant and would become a mortarman with the U.S. Army’s 475th Infantry Regiment. He served in campaigns across China, Central Burma, and India Burma. As part of the MARS Task Force, Fields was responsible for penetrating deep inside enemy territory to capture crucial checkpoints and objectives, while traversing difficult landscapes throughout Burma and South East Asia.

According to U.S. Army Archives, Fields first saw action in 1944 during the Siege of Myitkyina, Myanmar, which was part of a larger campaign throughout Northern Burma. A force comprised of American, British, and Nationalist Chinese forces, under the command of U.S. General Joseph Stilwell, were able to overrun Japanese forces in Myitkyina and the surrounding airfield on August 3, 1944. The Victory at Myitkyina was crucial to opening the Burma Road to China through the Himalayas, allowing for allied forces to connect supply lines without aerial harassment from the Japanese Air Force and attacks from land-based units. It is noted that Fields unit traveled over 500 miles through difficult terrain with nearly nonexistent roads to reach Myitkyina.

Shortly after this battle, Merrill’s Marauders were deactivated due to high casualty rate from battle and disease and Fields, as well as the rest of Merrill’s Marauders, were combined with other units to create the Army’s 475th Infantry Regiment, designed for long range penetration into enemy territory. The 475th Infantry Regiment would become part of the MARS Task Force.

After the Burma Road was established, numerous attempts by the Japanese to cut off supply lines and retake the road began. Fields was sent deep into enemy held territory on multiple occasions during covert missions to help keep the crucial supply lines open, resulting in engagements with the enemy throughout the Burma Campaign. While deep inside Japanese controlled territory, Fields was presumed missing in action (MIA) after being cut off by enemy forces a total of three times. Due to no communication with command, the MIA designation resulted in three separate telegrams being sent to his parents stating that Fields was missing in action, his whereabouts were unknown, and very little information could be relayed about his status.

By early April 1945, the Burma Road was secured and Japanese forces were pushed further east. Fields was sent deep into South China where he was tasked with training Chinese troops, who were nearly always undersupplied and had received little to no prior training. He was notably awarded with the Special Breast Order of Yun Hui, the highest decoration that could be awarded to allied foreign war fighters for exceptional bravery and actions in the defense and liberation of China, by the Republic of China’s President, Chiang Kai-shek. His specific actions and bravery noted during the defense of an airfield in South China by his Chinese counterparts was sent up the ranks of the Chinese military command prior to the award citation.

While at an airfield in Nanning, China, he learned that his unit was headed to the front lines in a final push to expel the Japanese from the Asian mainland. Prior to beginning the move to the front lines, his unit received a message that the Japanese had surrendered, and the war was over. It was now time for Fields and the 475th Infantry Regiment to make the voyage back home. Fields left the Asian mainland on November 18, 1945 from Calcutta, India, on the U.S.S Marshall, which was in-route to Tacoma, Washington. The voyage would take a total of 31 days.

Fields said that he vividly remembered his time on the U.S.S Marshall. He was a squad leader at the time and volunteered his squad for “KP” duty, or kitchen patrol duty. He remembered that once rapport was established with the ship’s crew, his squad was able to eat what they wanted, when they wanted, and as much as they wanted, without harassment from others. Once crew members on the U.S.S Marshall became aware of who Fields and his squad members were and what they had been through in Southeast Asia, they were given their own private deck space in the galley (kitchen) and the mess hall.

After docking in Tacoma on December 18, 1945, Fields made the journey to Camp Shelby, Mississippi, where he was finally discharged from active duty on December 24, 1945, with an obligation to serve in the Army Reserve for three years. His parents arrived on the same day of his discharged, where shortly after, he returned to his home in Gainesville, Alabama.

Two years, nine months and fourteen days had passed since Fields had left home to serve his country in what undoubtedly changed the face of world. He was awarded the American Theater of Operations Medal, the Asian-Pacific Campaign Medal, Good Conduct Medal, Distinguished Unit Badge, World War II Victory Medal, and four battle stars for his service throughout the war.

“The time I spent in Burma and Asia, in retrospect, were some of the best and worst times in my life,” said Fields, after he was presented the shadow box at the Ralph H. Johnson VA Health Care System. “Under similar circumstances, I would do it again for my country. God bless America.”

“Voluntary Service always looks to assist our providers and our veterans who are our Nations Heroes,” said Matthews, Voluntary Service Specialist at the Charleston VA. “At the VA, we strive to emulate the ICARE principles by taking care of the Veterans’ health needs in whatever capacity. Providing Mr. Fields a shadow box and recognizing his family is in keeping with the quality service we provide and letting our Veterans know that we thank them for allowing us to serve them.”