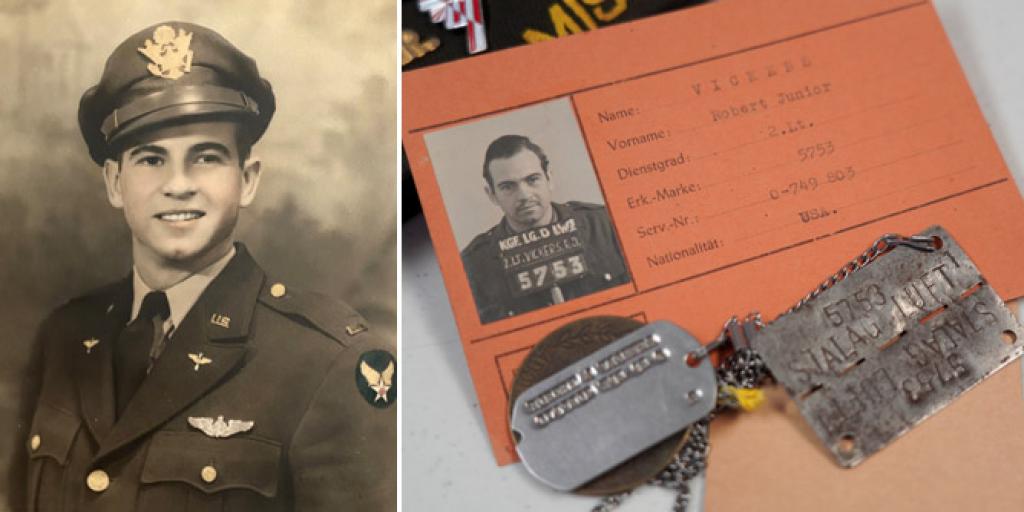 Portrait of Robert “Bob” Vickers in his dress uniform during World War II. Along with a photograph of his Stalag Luft 1 prisoner identification card and dog tag, and Army Air Corps dog tag.
September 16, 2022

On Aug. 23, 2022, representatives from Harry S. Truman Memorial Veterans’ Hospital traveled to Clarence, Missouri, to recognize the milestone achieved by one of the hospital’s Veterans. A member of “the Greatest Generation,” Robert “Bob” Vickers had celebrated his 100th birthday the week before. The newly minted centenarian welcomed the team from Truman VA and shared some of his story.

“What an honor it was to meet Mr. Vickers and help celebrate his life,” said Sara Ackert, BSN, MHA, Truman VA’s Interim Director. “Learning firsthand what he experienced as part of his service to this country was very humbling. We owe him, and all our Veterans, a debt of gratitude for the sacrifices they’ve made for us.”

Like most of those who served during World War II, Mr. Vickers is very modest about his time in the military. However, unlike others from his generation, he endured deprivations that few can understand.

A farm boy from Hagers Grove, Missouri, Bob grew up like so many other rural Americans during the Depression – working hard and doing more with a lot less. Following his graduation from high school in 1941, he attended the University of Missouri ― which is where he was when America entered World War II following the surprise attack on Pearl Harbor.

Prior to the start of his sophomore year, Bob joined the U.S. Army Air Corps, hoping to become a pilot. Although issues with depth perception kept him from achieving that goal, he did make it into the air as a bombardier on a B-17 Flying Fortress.

Bob and his crew eventually were assigned to the Eighth Air Force’s 306th Bomb Group, also known as “The Reich Wreckers.” At that time, crewmen were required to fly 30 combat missions before they could rotate home. To be sure, this was a high number, and many considered it a death sentence ― and for good reason. Estimates indicate more than 70 percent of the Eighth Air Force’s bomber crewmen either were killed, severely wounded, captured, or were listed as missing in action before completing their required missions.

Against extraordinary odds, Bob’s crew eventually did complete 27 missions over France and Germany. Confident he and his comrades soon would return stateside, Bob sent word to his family that he’d be home for Christmas. Then came Sept. 12, 1944 – his 28th mission.

Over Germany and near that day’s target, a Focke-Wulf 190 fighter raked his plane with machine gun fire.

“We were to suck the German fighters off while the main group of the Eighth Air Force went in and knocked the primary target off,” Bob said as he described the damage to his plane. “We probably could have put the fire out but the control cables to the rear were cut and the pilot lost control.”

With nothing else left to do but bail out, the crew jumped from an altitude of more than 30,000 feet.

“You were supposed to wait until you could see the ground coming up at you before you pulled the rip cord,” Bob said. “However, I got in a hurry and pulled it too soon and had longer to float down as a good target to shoot at.”

During the 20 minutes it took for him to reach the ground, Bob counted 50 American parachutes. Several of those who bailed out, to include some of Bob’s crew, were wounded from German gunfire as they descended through bullets, shells, and debris from exploding planes.

Captured by a farmer, Bob was treated aggressively by the initial Germans he encountered.

“He was beating me with that gun on the back of the head, with the butt of it,” Bob said. “I was glad he didn't shoot me.”

Eventually others came out of their homes to throw eggs and used dishwater at the newly captured prisoner, who was forced to run two miles in his bulky flight suit to a nearby town jail. Eventually, he was taken to a prisoner of war camp known as Stalag Luft 1, where he became prisoner number 5753.

As a POW, Bob and his comrades experienced starvation, exposure to the elements, sleep deprivation, and almost complete isolation from their families. Bombarded with propaganda that the U.S. was losing the war, the POWs would only learn the truth from new prisoners.

On April 31, 1945, the Russian army liberated Bob’s camp. Within a few weeks, the malnourished Missouri farm boy, now 22 years old, began the road to recovery ― first in France and eventually at home.

Bob married his high school sweetheart shortly after his return from the war. The two bought a farm and raised two children. Throughout his life, Bob remained active in his community and regularly attended reunions with members of the 306th Bomb Group. His wife Helen died in 2000, and Bob currently is a resident of a nursing facility in Clarence.

Today, Sept. 16, 2022, is National POW/MIA Recognition Day. The staff at Truman VA wish to convey our gratitude to Mr. Bob Vickers for his service to our nation and for sharing his incredible story of devotion and perseverance.