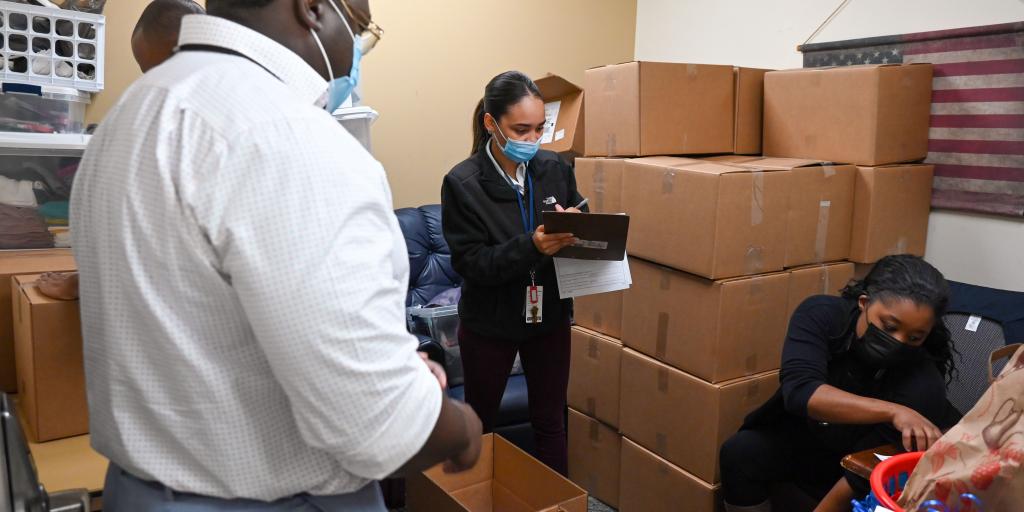 In total, the CVAHCS received more than 1,000 pounds of non-perishable food items from local churches, non-profits, individuals, businesses, and Veteran service organizations. All the donations went toward providing a Thanksgiving meal to roughly 140 South Carolinian Veterans who are facing food insecurity.

“Food insecurity is a problem nationally,” said Shannon Stone, a CVAHCS voluntary service specialist. “These types of donations are very important to us because we rely heavily on them to take care of our Veteran families during this time of year.”

To many, Thanksgiving dinner isn’t complete without a turkey, and the men and women of the Alpha Omega Phi Military Fraternity and Sorority provided 75 turkeys to include in the meal boxes.

“This is what we’re here for,” said Kenny Thompson, the national president of the Alpha Omega Phi Military Fraternity and Sorority. “Our mission is to give back to the Veterans to the highest regard possible, and our sponsors like GOYA and Kroger greatly help with that.”

Initially, the number of meals were limited to 75 to ensure that every Veteran received a turkey, but as social workers began determining more and more Veterans in need of a holiday meal, an alternative solution was developed. To ensure that everyone who received a Thanksgiving meal was able to enjoy the holiday staple, Veterans who did not receive a turkey in their box were given a gift card to purchase one.

Prior to the event, members of Soldiers’ Angels helped CVAHCS employees assemble the boxes, which included items such as: macaroni and cheese, stuffing, yams, green beans, cake mix with icing, and much more.

In a story to explain how impactful these donations are, Stone, with tears in her eyes, talks about a local Veteran who was “ecstatic” to receive a donation meal from a previous year’s Thanksgiving, because it meant that he would be able to provide a homecooked meal to his children. “That’s the impact,” Stone said. “These donations help families not only have a meal but help them to create a memory and have quality time together.”