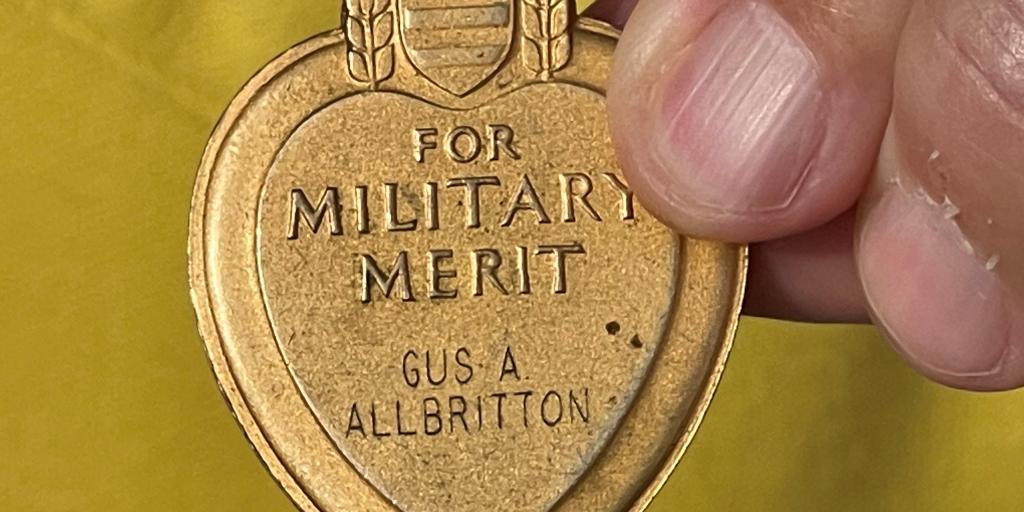 Gus Allbritton's name was engraved on his Purple Heart to help a good Samaritan return it to its rightful owner.
By James Huckfeldt, Deputy Public Affairs Officer
July 22, 2022

Gus Allbritton graduated from high school on a Friday, received his draft notice in the mail and found himself at Ft. Benning, Georgia, on Monday. He served in Vietnam and prior to his discharge, the 20-year-old Allbritton received his third Purple Heart on a parade field at Ft. Hood, Texas.

Gus Allbritton graduated from high school on a Friday, received his draft notice in the mail and found himself at Ft. Benning, Georgia, training to become a U.S. Army Infantryman on Monday. He served in Vietnam with the 173rd Infantry Regiment in 1969 to 1970 and prior to his discharge, the 20-year-old Allbritton received his third Purple Heart on a parade field at Ft. Hood, Texas.

“The paperwork was processed a lot slower then so when my tour was complete, I flew to Ft. Hood, Texas to finish my enlistment,” Allbritton said. “It was there that the award was approved and an officer pinned it to my uniform.”

After being discharged, Allbritton took a career in law enforcement after moving back to Florida. The medal made its way inside a large, glass water bottle that contained loose change and other trinkets Allbritton collected over the years. His home was burglarized in 1983 and the thief stole the bottle and other items. Allbritton knew through his law enforcement experience that there was little, if any, chance of recovering his stolen property.

Thirty-eight years later, something short of a miracle happened. A good Samaritan named Jamie Bath was sorting through some items on a flea market table when he discovered a medallion in the shape of a golden heart with George Washington’s likeness in the center of a majestic purple background. At the top of the medal is the Washington family Coat-of-Arms where a vacant hole used to secure the regal purple and white ribbon. An engraving on the back read, “Gus A. Allbritton - for Military Merit.”

Intrigued, Bath bought the medal and went home and conducted investigative research on the Internet to see if he could find Allbritton. Much to his surprise, Allbritton was not too difficult to track down as he’s been volunteering with the Carl Vinson VA Medical Center for 30 years, racked up approximately 35,000 hours of volunteer time, and has carved out a digital footprint through Carl Vinson VAMC’s stories throughout the decades on social media and through local media. Bath called the facility and asked that a message and his phone number be passed on to Allbritton.

Allbritton called, and after answering a few questions, the gravity of what Bath told him rocked his world. Could Bath have really found Allbritton’s long lost Purple Heart after almost four decades? Bath offered to mail the medal to Allbritton, and a few days later, he received the Purple Heart with his name inscribed on the back. The moment and days that followed were surreal.

“I couldn’t believe that after all this time my Purple Heart is back where it belongs,” Allbritton said. “I gave the other two to my kids, one to my daughter and the other to my son. I think I’ll keep this to myself as the Good Lord gave me another opportunity to care for it.”

Most Servicemembers and Veterans never want a Purple Heart as it’s awarded for being wounded in action or posthumously. Allbritton however, couldn’t be happier to receive his third Purple Heart for the second time.