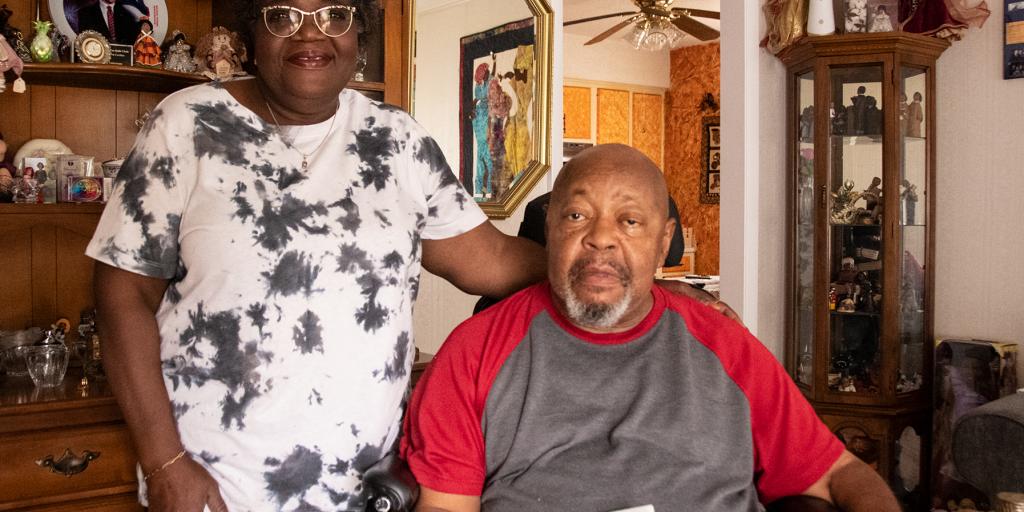 Wavey Alston and his wife, Edna. After years of back pain that made him dependent on opioids to function, Wavey found relief through the DVAHCS Whole Health program. Weekly acupuncture appointments now make his back pain manageable.
September 30, 2021

The best way to reduce downtime when ill is to avoid becoming sick. VA adopted several initiatives through its Whole Health wellness program, using a variety of Complementary and Integrative Health (CIH) practices designed to keep people well, in addition to supporting recuperation and healing.

In some cases, it can result in a reduction in medications. For many Veterans, it is changing their lives.

Veterans are becoming more aware of their need for good health. Some are making changes subtly over time, and others are making daily changes. For Wavey Alston, a Vietnam-era Air Force Veteran, change began in June 2017.

“I just couldn’t live with the [back] pain much longer,” said Wavey. “I was taking Morphine tablets, and they helped, but I only felt better until the effect wore off and the pain came back.”

Wavey’s back pain began while he was in the Air Force. While stationed in Thailand during the Vietnam War, Wavey worked as an aircraft mechanic, which required much physical labor.

“I had fun,” said Wavey, “But I did a lot heavy lifting. Of course, I was young, and it didn’t seem to be a problem then.”

Once his time in the Air Force was over, Wavey returned home to Durham, N.C., to move on with his life. He found work at a printing company and started a family. Life was good. But then the years of heavy lifting began to emerge in the form of back pain.

“My back just got worse,” said Wavey. “Then our insurance costs went up. I never considered going to the VA until then, but it was the best decision we ever made.”

Eventually, Wavey became a patient at the Physical Medicine and Rehabilitation Clinic at the Durham VA Healthcare System (DVAHCS). During his entrance into VA health, Wavey acknowledged his dependency on opioids to control pain. To him, the morphine tablets were necessary but self-defeating. That is when staff at the clinic suggested a possible alternative; acupuncture.

Acupuncture is a CIH practice involving the insertion of needles at strategic points on the body. It is traditionally and frequently used to treat pain. Studies show that acupuncture is an effective treatment for various conditions, especially chronic back pain. Despite the uneasiness some Veterans initially feel about the use of needles, acupuncture is a relatively painless alternative treatment option that promotes wellness.

“The whole needle thing put me off at first,” said Wavey. “But the doctors explained the benefits to me, and I decided that it wouldn’t hurt to try it.” It took a few visits, but the treatments began to work. “It was a strange feel at first.” He was seeing an acupuncturist twice a week. “It took a while to start feeling the benefits,” said Wavey. “I’m glad I stuck with it.”

Wavey has engaged in acupuncture for his chronic back pain for the past four years, now. He is sure to meet his acupuncturist once a week. While his pain is not gone entirely, it is not the hurdle that it once was.

“Before I started all this, I could barely move without the morphine,” said he said. “It was that bad. Now, I can move around and do more of things that I couldn’t do before. Can’t say I’m a new man, but I really feel like it.”