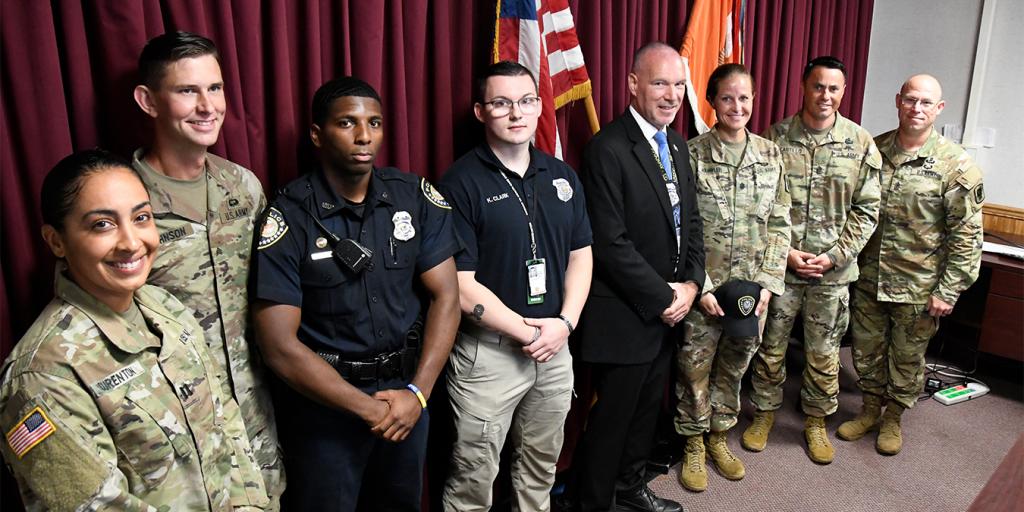 “I wasn’t expecting this kind of turnout,” says Sgt. Adam Johnson, a team leader with the 50th ESB-E and the catalyst for this year’s foot march. “At first, I was only expecting active-duty Soldiers to take part. When Officer Clark got in touch about taking part, I figured it wouldn’t hurt.”

The Norwegian Foot March was established in 1915 to test the strength and endurance of Norwegian Soldiers before entering combat. Since its inception, the March has grown and has been adopted by the United States Military as a test of the will. To complete the March and earn the coveted skill badge, Soldiers must complete an 18-mile ruck march, carrying 25-pounds of equipment in under 4.5 hours. This year’s Norwegian Foot March was just over 19-miles.

“This was something I wanted to do, but never really had the chance while I was in,” said Officer Clark. “Then I got to thinking how this would be an excellent way to reach out to the new generation of Veterans from Operations Enduring and Iraqi Freedom and show them that the VA has something to offer, and that you don’t have to be 70-years-old to get care at the VA.”

Initially, Officer Clark, the newest member of the DVAHCS Police Service, planned to attend the event alone to connect with Veterans. However, after pitching the idea to his fellow officers in Police Services, Officer Clark found other Veterans willing to test their Army muscle memory.

“Physically, it (the Foot March) impacted me tremendously. I had to recuperate the day after,” said Officer Talley. “Being a former MP (military policeman), it was great to interact with fellow soldiers at Fort Bragg. It was great being around the 16th MP Brigade, the 82nd Airborne, and 50th Sig soldiers!”.

Despite having completed a ruck march in several years, Deputy Chief Joseph Scunziano, a 24-year Army Veteran and the oldest participant at the event, finished fourth place in less than four hours, which is an impressive accomplishment considering  25% of the participants failed to complete the Foot March.

“I haven’t put on a ruck since 2006,” said Deputy Chief Sunziano, a self-described fitness enthusiast. “But I thought this was going to be a great opportunity to get interact with younger Veterans and get out there, even if I had to crawl across the finish line.”

Ultimately, the three Army Veterans received skill badges and bragging rights. However, DVAHCS Police Services cites their participation as a commitment to serving those who served, past and present.
“To be able to be out for two years, and do this and succeed, is a really great feeling,” says Officer Clark. “Plus, we reached our fellow Veterans in a meaningful way and had fun at the same time. That alone, was worth the effort.”