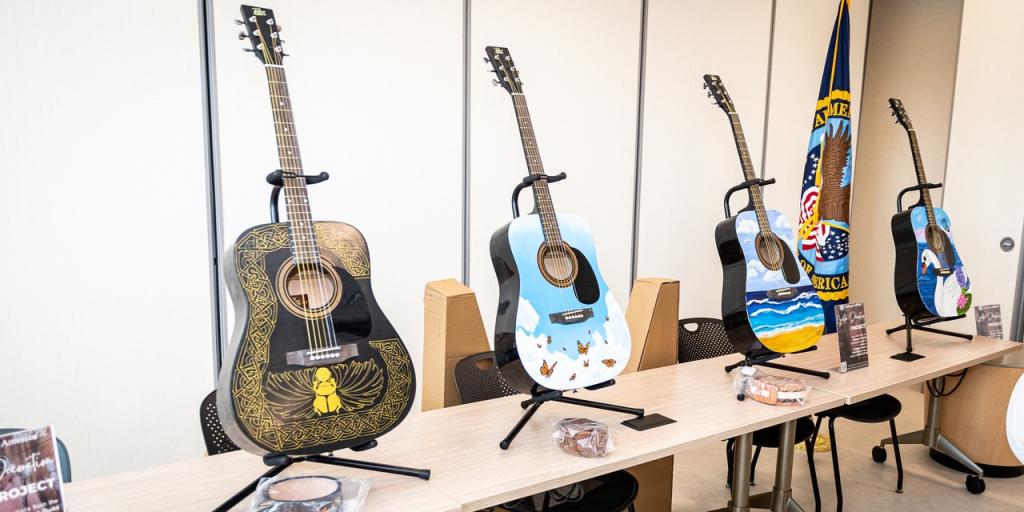 Guitars painted by the Muskogee Art Guild were on display in Muskogee and Tulsa before the music camp started. These four were on display at the Ernest Childers VA Outpatient Clinic in Tulsa.
By Nita McClellan, Communications director
July 6, 2022

When the Muskogee Art Guild got a call from the Eastern Oklahoma VA Health Care System (EOVAHCS) asking if they would like to decorate guitars for Veterans, their immediate response was yes.

Knowing that these guitars were going to Veterans as part of their therapy was all the inspiration the Art Guild needed. By the end of three weeks, they had completed 17 guitars.

The guitars are part of a new music therapy program being offered at EOVAHCS in partnership with Challenge America, a non-profit organization that uses music therapy to help Veterans cope with traumatic brain injuries and post-traumatic stress. VA began partnering with them in 2021 and EOVAHCS was selected as one of five VAs to participate this year.

“We are very proud to also be the only VA site to offer the music camp exclusively to women Veterans, which began June 7,” said Dr. Nathan Williams, Whole Health Director.

After the guitars were decorated, they were displayed for two weeks at 17 locations – 12 in Muskogee and 5 in Tulsa – which included various businesses, museums, government buildings, and non-profit groups. The Art Guild even conducted a scavenger hunt of the various locations to promote awareness of the program to the community.

“I think each artist truly gave thought to their painting and what they hoped their art would bring to the Veteran,” said Wren Stratton, Muskogee Art Guild member. “Each artist brought their unique take on what the guitar could look like and what emotion it could bring to the veteran who chose it. For most of us, the opportunity to serve your country has not been an option. We are so grateful to those who have had the courage to do this. To have the chance of offering even some small gift in return was, in turn, a gift to us.”

The camp consists of the participants working virtually with both a Music Therapist and professional songwriters in a process that teaches Veterans how to play guitar and allows them to convey their emotions into a song they write.

“The final day of the camp is June 28, which is their concert,” said Dr. Williams. “The concert is when the Veterans’ songs will be performed by professional songwriters as an ode to the therapeutic process of the camp.”

Veterans were also able to pick out their own guitar from the group, choosing whichever one means something to them.

“They were all unique, yet at least one of the guitars spoke strongly to each Veteran in a different way,” said Dr. Williams. “There was even one guitar beautifully painted with a picture of a woman with red hair and that guitar was chosen by a Veteran who looked just like the painting! If a person did not know that it had been painted by an artist with no prior knowledge of the participant, one would believe that it was a self-portrait of her.”

According to Dr. Williams, each Veteran shared their appreciation for the hard work that went into decorating the guitars and how much the program meant to them, particularly that it was a program

specifically for Women Veterans. There were tears of joy and appreciation and each Veteran reported how thankful they were for the opportunity to participate.

He also acknowledged Joan McWilliams, Whole Health Coordinator, who has been crucial to the success of the program.

“Being a life-long resident of Muskogee and knowing the strong ties in our community to art, music, and the VA, the idea of using our local art guild to decorate the guitars was a great way to increase local awareness and involvement with the project,” said McWilliams.