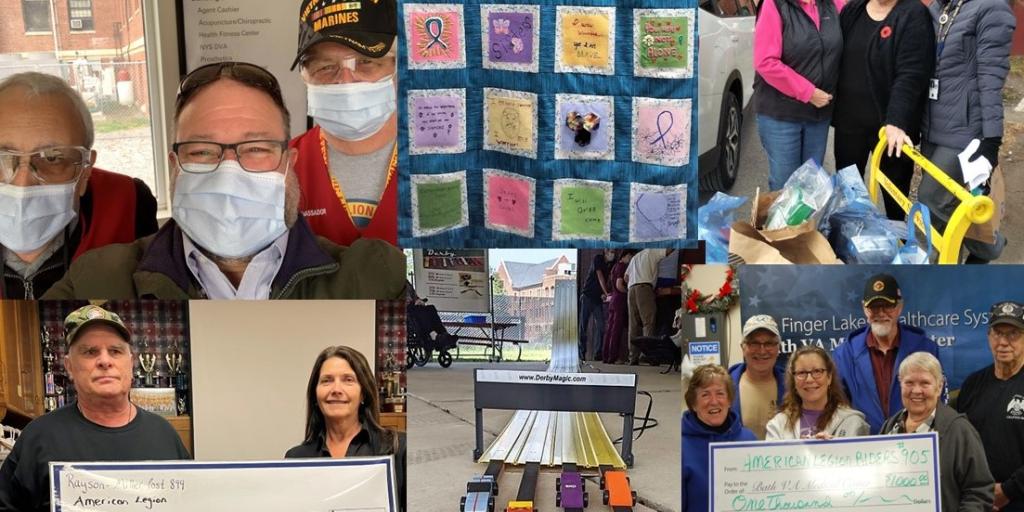 The American Legion was chartered by Congress in 1919 as a patriotic Veteran organization, focusing on service to Veterans, active-duty members, and communities.

Membership swiftly grew to over 1 million and became one of the most influential advocates for Veterans in the United States. Today, membership stands at nearly 2 million.

Members of The American Legion Family have never stopped their support and have been of great aid to the VA, including at the VA Finger Lakes Healthcare System. In 2022, members of The American Legion Family devoted 6,781 volunteer hours to VA FLHCS, including positions as Red Coat Ambassadors, Cemetery, Museum, DAV drivers, Recreation, and CDCE assignments. The hours of time they have donated at the national average is valued at $203,091!!

Contributions and donations from each Legion Family Organization for the VA FLHCS totaled $84,234 in 2022, representing almost half of the support of the 4 groups to VA facilities across New York State. American Legion members are Veterans and can always be counted on to support their fellow Veterans.

Their monetary support for the Holidays, Recreation, Golden Age Games, and other major needs have been continual.

Support of American Legion and American Legions Rider members has been major and crucial to the support of Veteran families at the National Cemetery in Bath for funerals and other solemn events.

The generosity of The American Legion Auxiliary in both Canandaigua and Bath has included sponsoring the annual Gift Shop, where family members of every inpatient were sent holiday gifts and cards by the Auxiliary on behalf of each Veteran. The Auxiliary has also been instrumental and generous in their support of the VA Creative Arts Program and Wreaths Across America.

They have been there as well to support the VA in more personalized areas, such as providing quilt squares and flags to the Sexual Trauma Team to assist in awareness and support of Women Veterans.

The Sons of The American Legion have been a force in support of the VA anytime there has been a need to fill. In 2022, the Sons donated 295, or 42%, of all the $20 gift cards distributed to Veterans in structured outpatient programs as part of the Canandaigua Holiday programming.

They are regular contributors to Recreation, Hospice, and other programs in the VA FLHCS. Members of the Sons are also seen frequently fulfilling specific needs big and small; an electronic dictionary requested by an inpatient, funding for a pizza and bowling party by the Visually Impaired Program, and providing race cars for Recreation Therapy’s Pinewood Derby. The Sons also joined with other Legion Family members to provide healthy “snack packs” to all staff in Canandaigua during the early days of the Pandemic.

The $287,325 in contributions of time and treasure by the Organizations of The American Legion Family in 2022 is appreciated by all in the VA Finger Lakes Healthcare System.

Their support since the beginning of the VA has helped an untold number of Veterans and Veteran families, and will never be forgotten. Thank You!!