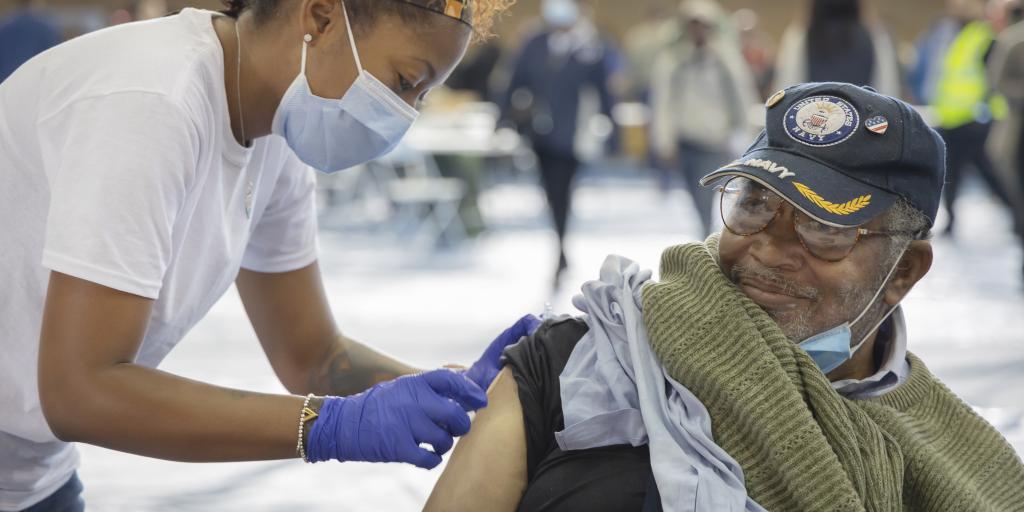 Hundreds of area Veterans got a helping hand during the Chicago Winter Stand Down at the Illinois National Guard Northwest Armory on Oct. 28.

The event offered resources to Veterans in need, including housing, food and employment assistance, winter clothing, and health screenings.

"My wife made me come, and I'm glad she did," joked Navy Veteran Charlie Hayes after receiving a blood test, and juggling several bags of food and clothing. "I got more than I can carry and a new coat to get through the winter."

Started over 25 years ago, Chicago Stand Downs are organized by the Department of Veterans Affairs, nonprofits and local agencies to help the Chicagoland homeless Veterans and those in need. Events take place every winter and summer, according to Donald Donahue, of Edward Hines Jr. VA Hospital and Stand Down planning committee chairman.

"Being homeless can be very traumatic for people," said Donahue. "[At Stand Downs], Veterans can see they are not the only one struggling. It is a way to get people engaged in both community and VA services."

"I'm about to be on the street," said Mr. Kinney, a former Soldier who asked that his full name not be used.

The South Side Chicago Veteran explained his apartment building is being renovated, and the owners won't renew his lease. He can't afford to move and has nowhere to stay after his rental agreement expires.

"It weighs on you going to bed knowing you may not have a roof over your head soon," he said.

Kinney was connected to Hines VA Hospital's Homeless Outreach Program, which provides housing and rent assistance to Veterans. Anyone can call 708-202-2961 to report seeing a homeless Veteran, or a Veteran can call for help. A VA social worker will be dispatched to meet the Veteran, according to the program.

Donahue said Kinney's story is not unique, but programs like Stand Downs have helped reduce Veteran homelessness and insecurity in the Chicago area.

The Department of Veterans Affairs has set a goal to house 38,000 homeless Veterans across the U.S. in 2022, housing 31,000 so far. Hines VA Hospital has permanently housed 232 Veterans this year, 94 percent of its regional goal, according to the VA.

Nationally, Veteran homelessness is down an estimated 11 percent from 2020 and more than 55 percent since 2010, according to the 2022 Point-in-Time Count by the Department of Housing and Urban Development.

"The numbers are going down," Donahue said.

Donahue noted this is only possible with area nonprofits, and local and federal agencies working together, like at the Winter Stand Down.

The Greater Chicago Food Depository was among the nonprofits that participated in the Stand Down. The organization helps food-insecure area residents.

"The Greater Chicago Food Depository values the work we do with community partners, such as the Hines VA Hospital, to keep our Veterans nourished. In addition to reaching Veterans through our main network of food pantries, soup kitchens, shelters and events such as the Stand Down, we're also proud to support Veterans through the weekly food distributions at the Hines on-site pantry. So far in 2022, we have distributed the equivalent of more than 106,000 meals to Veteran households," said Sana Syal, Director of Health and Population Specific Programs at the Greater Chicago Food Depository.

The food depository distributed more than 800 bags of food and produce, and approximately 400 lunches at the Stand Down, according to Man-Yee Lee, Director of Communications for the nonprofit organization.

"Homelessness is a societal issue," Donahue said. "The VA has been most successful in lowering Veteran homelessness when all the partners in the community work together."