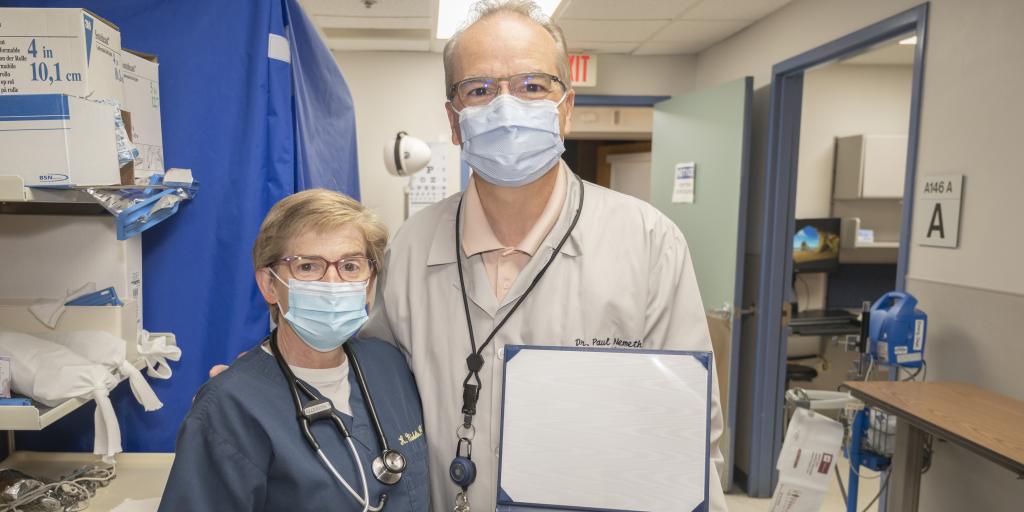 Dr. Paul Nemeth, chief of Emergency Medicine, received the Patriot Award at the hospital for his continued support of Kristine Nicoletto, a Hines VA Physician's Assistant, and a lieutenant colonel in the Illinois Air National Guard's 182nd Medical Group.

"It just makes me feel really appreciated. I never knew there were awards for things like this," said Nemeth, smiling through his mask. "[Nicoletto] is an amazing asset to this department, and to receive this award because of her means a lot."

The Patriot Award, also called the Patriotic Employer Award, is given to a civilian supervisor nominated by a Guardsman or Reservist employee for directly supporting their service, according to Michael Holub, Illinois' Vice-Chair of ESGR and award presenter.

"We give about 200 of these awards a year [in Illinois], so it's pretty unique," Holub said. “The award is important because it lets the supervisor know that their efforts don't go unnoticed."

Nicoletto will retire from military service this September and credits the support from Nemeth for her ability to remain a citizen-Airman while at Hines VA.

"He's been truly supportive of my being in the Guard for the entire eight years I've been at Hines," she said. "He's told me all along, 'I think this is a wonderful thing you're doing, and anything you need, let me know.’”

According to Nemeth, supervisors supporting Reserve and Guardsman employees are essential because a healthy work-life balance helps everyone.

"I try to work with our group in a way where I want your life to be just as important as your work," he explained. "When you're happy in your situation outside of work, you bring that goodness here for our Veterans."

The Patriot Award was an honor for Nemeth, but he'd rather talk about Nicoletto and her impact on Hines Veterans.

Nicoletto was Nemeth's first Guardsman employee, and he encourages other medical organizations to hire Veterans. According to Nemeth, Nicoletto's service instantly connects her with patients.

"For a Veteran patient, knowing that there is a person that also has the experience with the military and military-style, that is a whole different level of connection that she can make with the Veteran that I can't," he said.

“I think it’s noteworthy that Dr. Paul Nemeth received an award honoring his hard work but used it to recognize the hard work of his staff,” said James Doelling, Hines VA Hospital Director. “That’s just who he is and why he deserves this recognition. He’s the type of physician we want caring for our Veterans.”