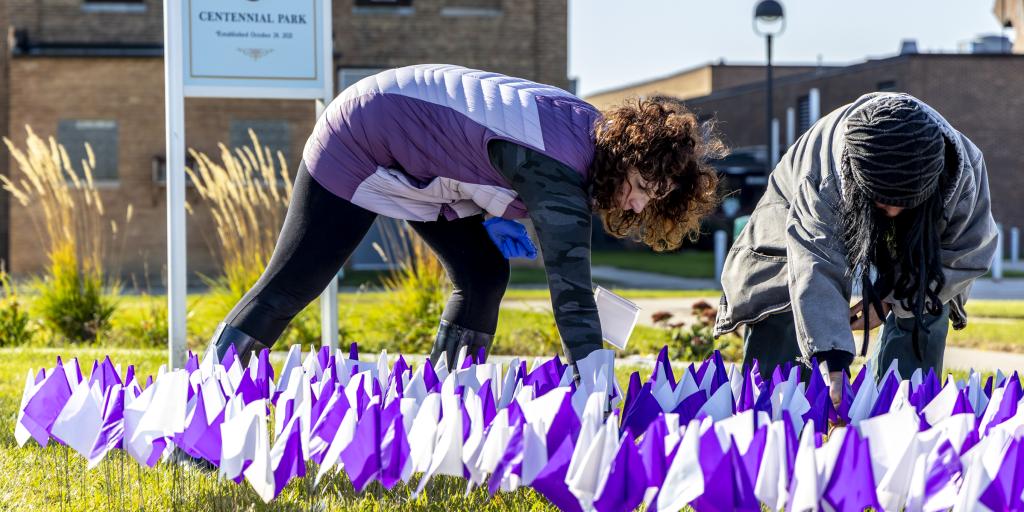 The display is part of the hospital’s campaign to share resources and support during Domestic Violence Awareness Month. Purple ribbons represent IPV awareness and white ribbons symbolize men standing up against violence and harassment, according to Erin Hanrahan, IPV Assistance Program Coordinator at Hines.

"We hope to raise awareness of this national issue and let Veterans, partners, caregivers, and VA employees to know that help is available when they are ready and ultimately save lives for those impacted by IPV," said Hanrahan.

According to Hanrahan, more than 150 people have sought help from Hines VA’s IPV program in 2022, but the number may be much higher.

"Intimate Partner Violence is a serious and significant health problem that affects millions of Americans, including our Veterans," said Hanrahan. "It does not discriminate and touches the lives of individuals regardless of age, race, ethnicity, class, gender, sexual orientation, or religious affiliation."

National Coalition Against Domestic Violence studies shows one in three women and one in four men among the general population have experienced some form of Intimate Partner Violence.

Veterans could be twice as likely to experience it in their lifetimes, according to The National Center for PTSD.

In 2015, the Department of Veterans Affairs began dedicating staff trained to assist domestic violence survivors. Currently, more than 90% of all VA healthcare facilities, including Hines VA Hospital, have a designated staff and resources to serve Veterans, their partners and VA employees, according to VA.

"Attention to intimate partner violence among Veterans has increased significantly over the past decade," said James Doelling, Hines VA Hospital Director. "VA recognizes that this is a significant and complex health issue faced by many Veterans and their families, and we encourage those impacted by domestic violence to seek assistance."

Hines VA's display is located at the hospital's Centennial Park, near the North Entrance of Building One. It will last throughout October.