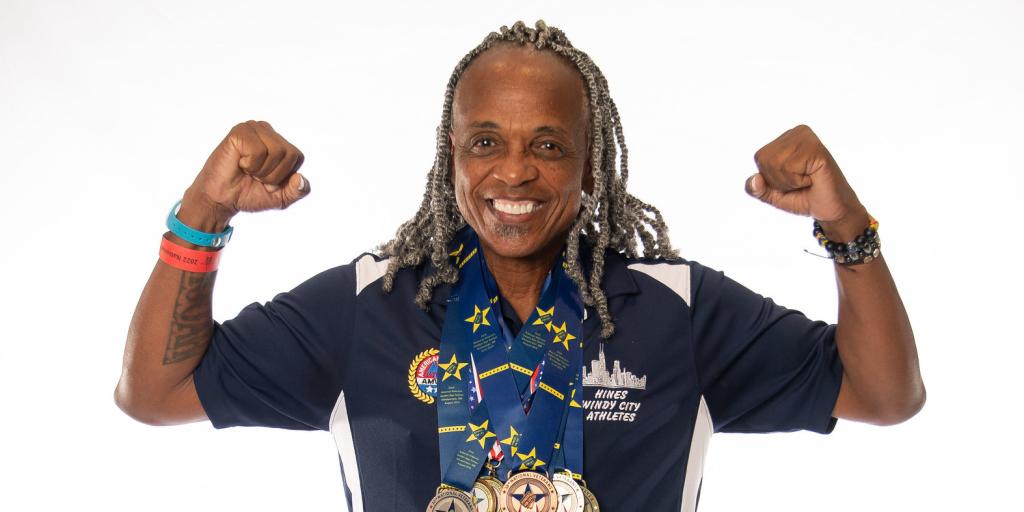 Franklin Newson, of Naperville, Illinois, poses with some of his 19 medals earned during the National Veterans Golden Age Games. Newson has competed with a team from Edward Hines, Jr. VA Hospital since 2017, and won 7 medals during the Sioux Falls, South Dakota, games in July 2022.
By Matthew Moeller, Public Affairs Specialist
August 1, 2022

The annual event was held in Sioux Falls, South Dakota, from July 18 to July 23. Veterans aged 55 years and older competed in a variety of sports, including track and field events, pickleball, marksmanship and shuffleboard.

“The games show even if you’re in a wheelchair, use a cane or walker, or are visually impaired, you can still stay active,” said team coach and Hines recreation therapist Mary Terese Wanicek-Squeo. “I saw an 87-year-old on the track powerwalking. It’s just really inspirational.”

Team Hines joined fellow Veterans from 42 states and the District of Columbia for the first in-person event since 2019, due to COVID restrictions.

“For me it’s about the camaraderie and the competition,” said Franklin Newson, of Naperville, Illinois. “With the military, it’s all about camaraderie, and I miss that. Doing the games gives me that same feeling.”

The 67-year-old retired Army infantryman has won 19 medals since first competing in 2017. This year he medaled in seven of his eight events, including four gold.

Among Newson’s most memorable moments during the 2022 games was his competitor, Homer Lee Pearson of Florida, coaching him to a gold medal.

“I had never competed in the long jump before, so I was explaining this to someone I was up against,” Newson said, chuckling. “Turns out he was a high school coach for the long jump. He said, ‘even though you’ll likely beat me, I’m still going to show you how to do it.’ He walked me through it step-by-step, and he coached me to a gold medal.”

“No one wins alone,” said Coach Wanicek-Squeo. She credits team bonding and sportsmanship among all Veterans for her team’s success on and off the field.

“It was really one team,” she explained. “They just supported each other. When they weren’t competing, they were watching their teammates and cheering each other on.”

“I initially thought it would be a nice competition and a way to stay fit,” the 71-year-old said. “But now it’s about getting together with everyone.”

Kelly competed in three events for Team Hines. Although he didn’t medal this year, his help off the field made him a winner for many attendees. Kelly is a licensed clinical massage therapist who provided massage care during track and field.

According to Kelly, he volunteered after noticing many fellow competitors cramping up during 2019’s Golden Age Games in Alaska. Kelly is working with the Department of Veterans Affairs with hopes of providing additional volunteer masseuses during future games.

“These games are all about being with and supporting your fellow Veterans,” Kelly said.

Next year’s games will be held in Des Moines, Iowa, and the team is already preparing.