The Battleship in Building One 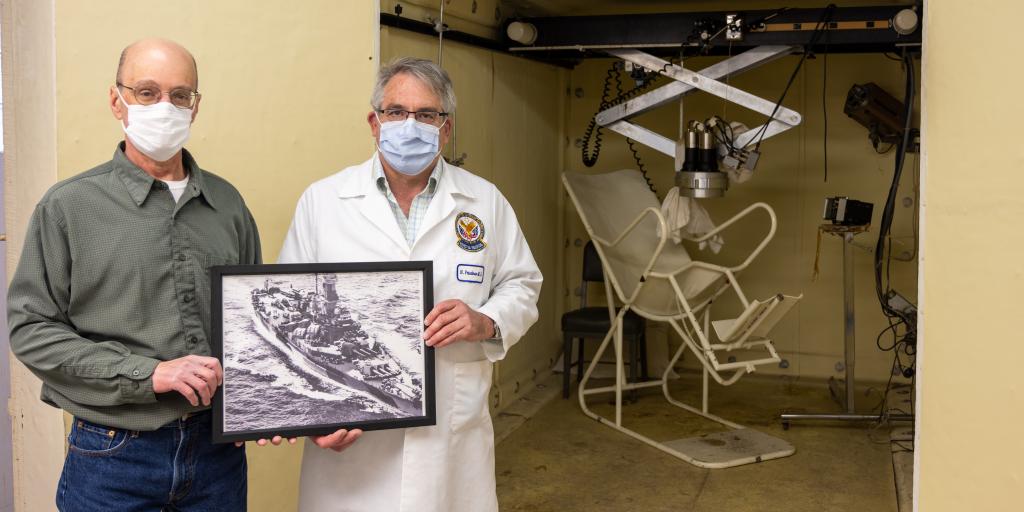 How did part of a World War II battleship end up in Hines VA?

Although a century of expansion and remodeling has left the sprawling 147-acre campus looking very different from when it first opened in 1921, many lost histories remain tucked away in overlooked boxes, closets and rooms.

But few forgotten memories compare to how 65 tons of the USS Indiana ended up in Hines VA Hospital's Building One.

Setting sail in 1942, the USS Indiana was the second of four South Dakota-class battleships commissioned by the U.S. Navy, designed for faster speeds and higher mobility. The ship served throughout the Pacific theater, cutting its teeth at Guadalcanal and continuing to island-hop until Imperial Japan's surrender in 1945, according to U.S. Navy records.

After the war, like many Navy vessels, the USS Indiana was decommissioned. For nearly 20 years, it floated mothballed in a California shipyard until its unique characteristics proved instrumental to the emerging science of nuclear medicine.

Ervin Kaplan was a U.S. Marine Corps Raider who served throughout the Pacific theater during World War II, including alongside the USS Indiana during Guadalcanal. After the war, Kaplan used his G.I. Bill benefits to become a medical doctor, eventually becoming Chief of Hines VA's new Radioisotope Service, his 2011 obituary noted.

Kaplan was a VA pioneer in nuclear medicine. Early in his career, he and his team designed an enormous device capable of detecting extremely low levels of radiation throughout the entire body, which was difficult at the time.

Referred to as "a radiation free island," in a 1966 VA press release, Kaplan's idea was an iron room, 10 feet long, 8 feet wide and 8 feet high. Inside a person would sit reclined, watching their favorite television programming. Detectors would absorb gamma radiation throughout the body and turn it into flashes of light. These flashes could be counted and measured to identify any radiation spikes, according to VA records.

However, Kaplan had a problem. His "island" needed metal free of man-made radiation to make such precise measurements. Thankfully, the Navy had millions of tons ready for scrap floating with their mothballed fleet.

"One of the chief reasons for using pre-1945 battleship armor is that such steel, during mining and fabrication, had not been subjected to man-made radioactive fallout (nuclear weapons)," Hines VA highlighted in a 1966 press release.

With metal dating to the 1930s, the USS Indiana was a perfect source.

In 1964, the Navy chopped off six eight-inch-thick armor plates from its gun turret. The Department of Atomic Energy loaded the scrap onto flatbed rail cars and shipped the massive cargo from California to a south-side Chicago foundry for milling. Over the next two years, Kaplan's iron box was built piece by piece atop a specially made 12-foot-thick concrete pad inside of Hines VA's Building One, according to hospital records.

"It creates an environment that predates atomic fallout," said Paul Kanabrocki, a health physicist at Hines VA. "There are other whole-body counters that exist, but you'd be hard-pressed to find one with this type of environment or shielding. It's never existed as far as I know of."

Kaplan's iron box was used for more than 40 years at Hines. Early on, the device was primarily employed for research. However, it served other needs over time, including analyzing survivors of the 1986 Chornobyl Nuclear Power Plant disaster in modern Ukraine, according to Peter Kelly, a retired Hines health physicist who worked with the device throughout his Hines VA career.

"Unfortunately, we found levels of radiation above normal standards in both individuals," Kelly noted in 1995.

By the 1990s, newer, smaller equipment was employed throughout the department. Kaplan's 1966 behemoth was largely used to monitor possible staff exposure to radioactive materials.

"We used it on some occasions if there was ever a fear of internal radiation exposure when I first started working here," said Dr. Nicholas Friedman, Hines VA Nuclear Medicine Section Chief, who began working at Hines in 1991. "They tried sticking me in there once. As soon as they shut the door, I started yelling, 'get me out of here; I'm claustrophobic,'" he joked.

Kanabrocki was an intern in Hines' Nuclear Medicine Service in the 1980s and recalled a more pleasant experience behind the box's 8-inch-thick steel door.

"I think I watched the Cubs game," he said, chuckling.

The device was officially retired in July 1995. But, according to Friedman, it was soon used one last time.

In 1993 the Department of Energy established a hotline for anyone suspected of radiation exposure from early U.S. Government experiments. According to Friedman, in the mid-1990s, a Chicago Navy Veteran was referred to Hines through the hotline. During the examination, the team found a spike of radium in the Veteran's scan.

"It didn't make any sense, because we didn’t expect any findings of a single [radioactive] element," Friedman said. "Then I saw he was wearing old watch from Elgin Watch Company."

Friedman explained that the Veteran forgot to remove his watch before being scanned. Radium was commonly used in older timepieces because the low levels of radioactivity made the watch faces luminescent. The Veteran was fine and repeatedly assured his watch was still safe to wear.

"That's how sensitive it was. It picked up that little bit of radium on his watch," he said. "That was the last time we ever used that thing."

Too cumbersome to move, the largely forgotten 65-ton piece of history still remains in its original room, locked behind a door next to what is now a regional center for VA's Office of the Inspector General.

Although Kaplan's iron box is now retired, the device holds a long history of service to this nation, just like the USS Indiana that birthed it.

"In a way, it seems very appropriate having part of the USS Indiana at Hines VA Hospital," said James Doelling, Hines VA Hospital Director. "The USS Indiana and its crew served our country proudly throughout World War II. Like many Veterans of its era, including Dr. Kaplan, it returned home and served its country in a different way. What better place for part of this Veteran battleship to make its final home than a Veterans Hospital?"