According to the Centers for Disease Control, our current transmission level in the community is high. As such, here are the health protection guidelines you need to be aware of before you enter one of our facilities:

Living kidney donation takes place when a healthy adult donates a kidney for transplantation to an individual with kidney failure. The living donor can be a family member, such as a parent, sibling, child, aunt, uncle or cousin. People who are not blood relatives of the recipient but who have heard about the recipient’s need, such as a spouse, good friend or even a stranger (good Samaritan), can also be considered as donors.

Giving the gift of a kidney can improve the health and lifestyle of the person receiving it. Knowing what to expect is helpful in making the right decision for the donor. We hope you find this information useful in making your decision regarding becoming a potential kidney donor.

Who can be a living kidney donor?

Anyone 21 years of age and older can be considered. The donor must be a volunteer, in good health and be willing to undergo comprehensive medical and psychosocial evaluation. Please have your donor call the VA Houston transplant team at 713-794-8767 to answer specific questions.

Are there risks to being a kidney donor?

As with any surgery, there are risks to the living donation operation, but they are very similar to any other elective procedure in a healthy person. Donors must undergo thorough evaluations for the medical, social, and psychological well-being before proceeding with donation.

Most donors spend 2-4 days in the hospital after surgery and return to work within four to six weeks. Kidney donation does not change the donor's life expectancy and kidney donors can lead a normal healthy life. After recovering from surgery, you can engage in most types of occupations and participate in sports as usual. Possible long-term risks of kidney donation may include high blood pressure (hypertension), reduced kidney function, or hernia. Research has shown that kidney donation has no effect on the donor’s ability to have children. But we highly recommend that you follow-up closely with your OBGYN. Please contact our transplant team to discuss the most up-to-date information available on the risks associated with living donation.

What are the advantages of living donation?

Having a living donor offers several advantages over having a deceased donor:

Sometimes a transplant candidate has someone who wants to donate a kidney to them, but tests reveal that the kidney would not be a good medical match. The VA Houston participates in the Kidney Paired Donation (KPD) program, which allows pairs that don’t match by blood to find compatible pairs. 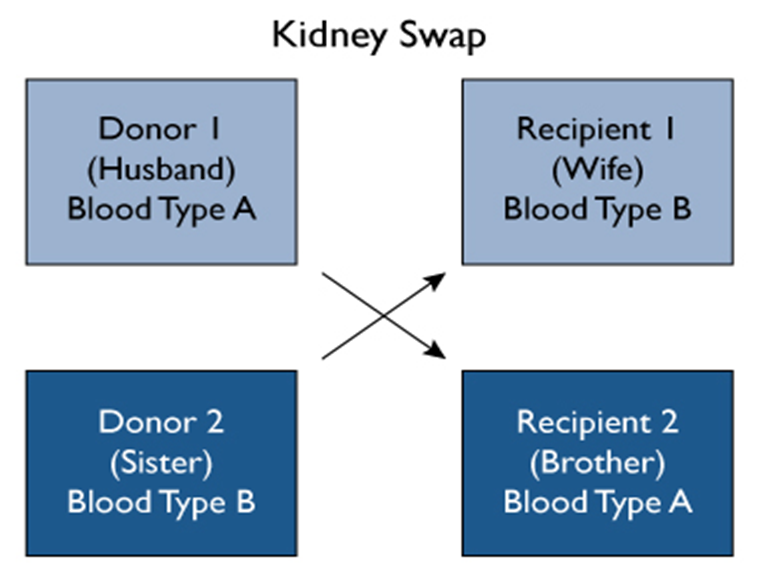 For kidney transplants there are three matchings that must happen between the donor and the recipient in order for the transplant to be successful. Usually the first test that is run is the blood typing test.

1. Blood Typing: It's preferable to get a kidney from a donor whose blood type matches or is compatible to the recipient’s.

2. Tissue Typing: If the donor and recipient blood types are compatible, the next step is a tissue typing test called human leukocyte antigen (HLA) typing. This test compares genetic markers that increase the likelihood the transplanted kidney will last a long time. A good match means it is less likely that the recipient’s body will reject the organ.

Make a difference in someone’s life by becoming a live kidney donor. Learn more about the living kidney donation process by contacting the VA Houston Kidney Transplant program at 713-794-8767.