A Special Visit from the Houston Texans 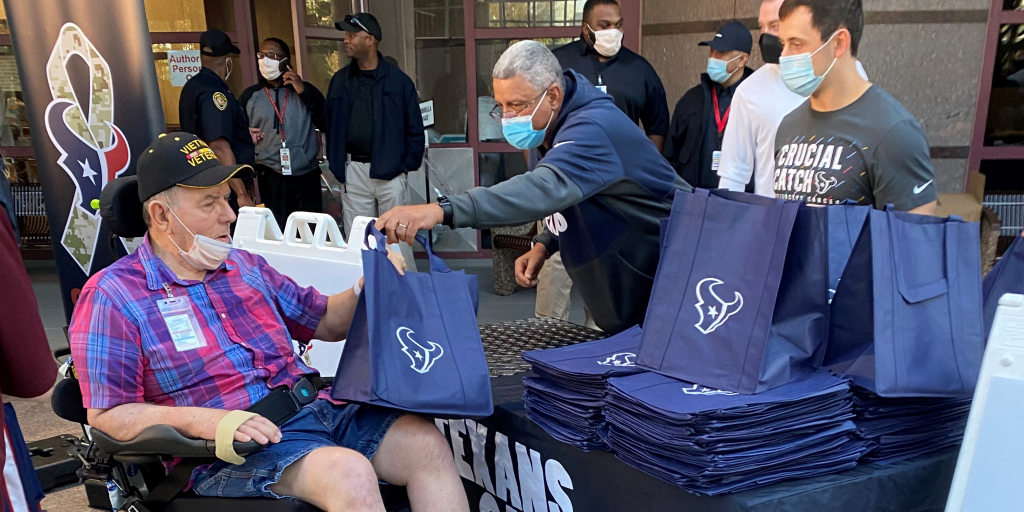 Houston Texans coaches, players, cheerleaders, and staff visited the Houston VA during Thanksgiving week to give thanks to Veterans.

Head Coach David Culley smiled while sharing kind words with Veterans outside the front entrance to the medical center, shaking hands as he distributed gifts and encouragement and thanked them for their service. The Houston Texans coach, whose father and uncle served in the military during the Korean War and World War II, said he was grateful for the moment.

“This is what it’s all about,” said Culley, who was joined by Texans running back Rex Burkhead, tight end-quarterback Jeff Driskel and wide receiver Chris Moore, the entire coaching staff, general manager Nick Caserio, and several other staff members. “We’re able to do what we do because of the service of these men and women here. It’s just exciting to be here. It feels so good to know we’re giving back. It’s a wonderful feeling.”

Veterans were thrilled to meet the Texans.  “Football in Texas is bigger than big,” said Army Veteran Lyle Stimon, who stood in line to meet the Texans and get a special coin.  “For these football stars to come out here to thank us, means so much.”

Houston VA thanks the Houston Texans for their support of our VA and our Veterans.