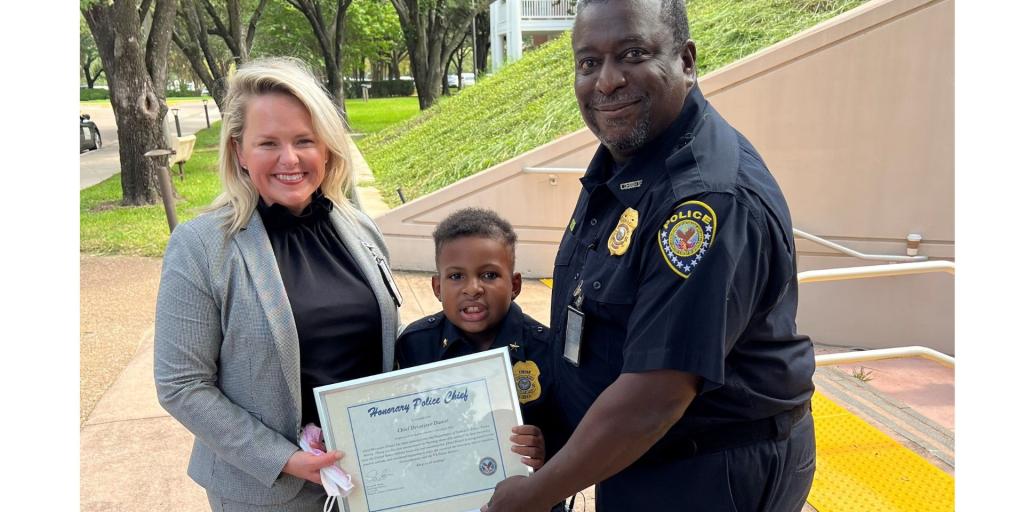 The Houston VA got a new honorary police chief today, as Devarjaye “DJ” Daniel, 10, was sworn in at a special ceremony outside the Michael E. DeBakey VA Medical Center.

DJ, who is battling terminal spinal and brain cancer, has always dreamed of being a police officer.  He is currently on a mission to be sworn in to as many law enforcement agencies as possible.

DJ’s ultimate goal is to increase awareness of childhood cancer while honoring the legacy of Abigail Arias, a 7-year old girl who dreamed of one day working in law enforcement.  Abigail was sworn in as an honorary officer of the Freeport Police Department before she died of lung cancer.  Her incredible courage and fight against cancer, inspired and touched thousands of people across the country.

DJ never got the chance to meet Abigail but wants to carry on her legacy.

“Abigail is always in my heart,” said DJ, proudly striking a pose in his new VA Police uniform. “At first my goal was to be sworn in by 100 law enforcement agencies, but I passed that a while ago….now I’m just having fun.”

Houston VA Medical Center Director Frank Vazquez and Police Chief Dwayne Barnes were thrilled to meet DJ and present him with a certificate making him honorary chief of the VA PD.   “DJ’s courage is inspiring,” said Vazquez.  “We are honored to welcome him to our Houston VA family.”

The “swearing-in” ceremony was made even more special by the presence of DJ’s father, Theodis Daniel, a Navy Veteran, who has been coming to the Houston VA for care since Hurricane Harvey struck in 2017.

Upon being sworn in as honorary police chief, DJ gave Deputy Director Lindsey Crain a big hug and asked, “Want to hear a joke?” He enjoyed telling jokes and giving firm handshakes and hugs to everyone present before stopping to pose for a photo with a group of Houston VA police officers gathered to welcome the newest and youngest officer into their ranks.

“Welcome aboard Chief,” Barnes told DJ.  “It’s a true gift to have you join our VA family.”