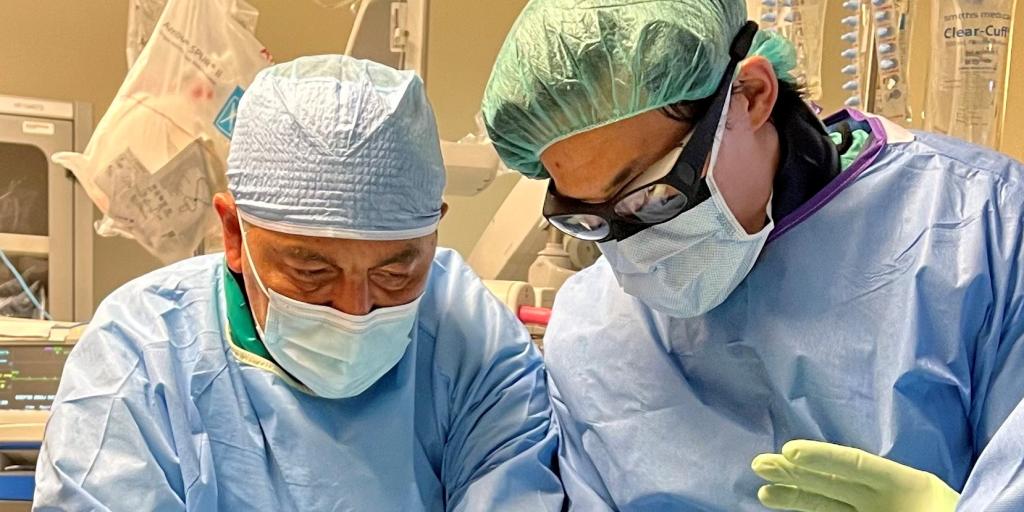 On July 1, doctors at the Michael E. DeBakey VA Medical Center (MEDVAMC) became the first in the VA to implant a special device aimed at preventing strokes in Veteran patients.

The device, called the Amulet, catches blood clots before they reach the blood stream and eliminates the need for blood-thinning medication.

“The Amulet device is the second FDA-approved device on the market for prevention of stroke in patients with atrial fibrillation who cannot take blood thinners,” said Dr. Irakli Giorgberidze, director, Arrhythmia Service and Cardiac Electrophysiology Laboratory at the Houston VA and associate professor at Baylor College of Medicine. “This is a major step forward in the care of our Veterans with high risk of stroke and bleeding.”

The left atrial appendage (LAA), a small pouch connected to the upper left chamber of the heart, is an area where blood clots can form in people suffering from atrial fibrillation (AFib).   AFib can disrupt the heart's ability to effectively pump blood, allowing it to pool and collect in the LAA causing an increased risk for clotting. If clots reach the blood stream, they can travel to the brain and cause a stroke.

For patients with AFib who are unable to take blood-thinning medication long term, the amulet device allows physicians to immediately seal off the LAA entirely and reduce the risk of stroke.

“This device implantation represents a very important milestone MEDVAMC cardiology has achieved in leading the way to the very best, cutting edge, medical care for our Veteran patients,” said Dr. Glenn Levine, chief, Houston VA cardiology section, and master clinician and professor of medicine, Baylor College of Medicine. “I couldn’t be prouder of Dr. Giorgberidze and the entire Electrophysiology team.”

Vietnam Veteran Reuben Cavazos received the first implant after consultations with the team.

“Since I had the stroke, it was presented that I would be a good candidate,” said Cavazos, who lives in Houston. “I was a little uneasy about it but after talking with the doctors, they assured me it would be good. I felt comfortable with all the doctors. They are wonderful people.”