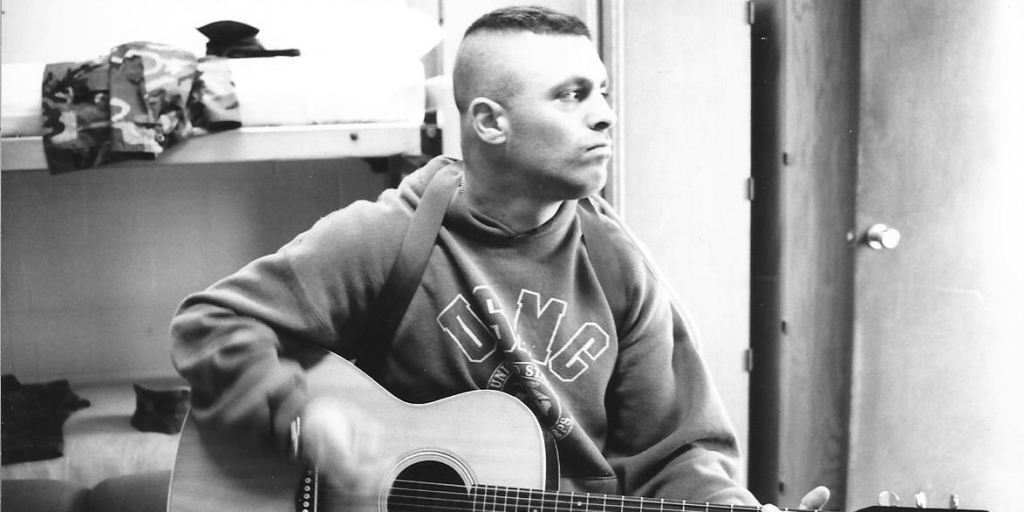 Scotti Fraser used his M16 as he fought on the front lines in the Middle East, but these days the Marine Veteran fights a different war with a different weapon.

Fraser now battles for hope and healing, using his guitar and music.

Fraser, who was discharged from the Marines more than 10 years ago, knows firsthand the pain and trauma of war.  A combat infantryman, he lost some of his fellow Marines too soon and endured many hardships.

Upon returning home, he struggled with post-traumatic stress disorder and music was there to help him cope.

“My two passions in life are the Marine Corps and music,” he said.   “Late at night, when I can’t sleep or I have a nightmare, I channel my energy into writing songs about my service.  It gives me hope and offers me a chance to reach out to my fellow Veterans.”

Fraser has written, played and recorded music since he was a teenager.  He played guitar in several bands and toured the west coast before joining the Marine Corps in his mid-20s.  He continued playing his music -- a blend of rock and roll, blues and country, for his fellow Marines through ten years of military service.

“Once when I was at a particularly challenging military training class, I pulled out my guitar to lighten the mood for me and my fellow Marines,” he said.  “When things get stressful, music is calming and raises everyone’s spirits,” he said.

Today Fraser plays at local Houston venues and his songs, some first written in his head while he fought in Iraq, are available on Apple Music and Spotify. He recently released a new song called “Unbroken,” which is a direct call to awareness about Veterans and PTSD.   His music focuses on overcoming hardships, bravery and “fighting the good fight.”    Every time he performs, he stops the show to recognize the Veterans present and encourages the crowd to thank them for their service.

“My goal is to inspire other Veterans,” he said. “It warms my heart when Veterans come up to me after my shows and tell me about their struggles.  We are all brothers and sisters.”

Besides inspiring Veterans with songs, Fraser encourages those struggling after their military service to seek help.  Nightmares and sleep disturbance can be symptoms of PTSD, a mental health condition that's triggered by witnessing or experiencing a terrifying event.  Most people who go through traumatic events, like military combat, may have temporary difficulty adjusting and coping.  If the symptoms get worse, last for months or even years, and interfere with day-to-day functioning, it may be PTSD. Fraser sought help for his PTSD at the Texas City VA Outpatient Clinic and the Houston VA Medical Center.

“My Houston VA care team has made a big difference in my healing,” he said.  “They encouraged me to continue to pursue my music, which has been my lifeline.  I may not have been as successful as I am today, with my music or my healing, without the support of my VA doctors.”

The healing power of music is nothing new.  Throughout history, music has been used to boost morale in military troops, help people work faster, and even ward off evil spirits by chanting.  Research has linked music to a number of health benefits, including lowering stress levels and boosting immune function.

“The creative expression of music can be very therapeutic,” said Karin Thompson, Ph.D, Director of the Houston VA’s PTSD Program.   “It has the power to evoke strong emotions and can decrease stress and offer comfort.”

Fraser says he makes his music for everyone who faces hardship and adversity.

“Serving my country was the greatest privilege of my life,” he said.   “Sharing my story and the stories of the trues heroes I served with is my way of giving back.”