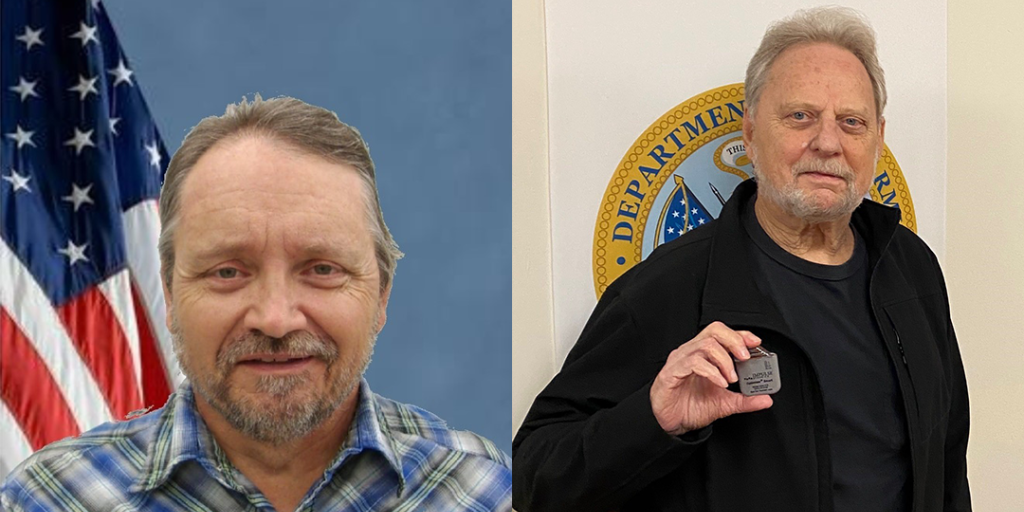 After seven years of struggling with chronic heart failure, Michael Clayton, a Veteran of both the Navy and the Army, is now literally up and running thanks to an innovative new procedure he received at the Michael E. DeBakey VA Medical Center in Houston.

Clayton was the first VA patient in the country to undergo a new, FDA-approved heart failure treatment called Cardiac Contractility Modulation Therapy.  As a result, his heart is beating stronger, he has more energy and is working as a substitute teacher.

“Before getting this new procedure, I had trouble staying awake,” said Clayton, a Persian Gulf-era Veteran from Alvin, Texas.  “Now I am back to work and exercising regularly … I feel like I’ve been given my life back.”

Clayton, 54, served two tours in Iraq while he was in the Navy.  After serving six more years in the Army National Guard, he got out of the military and was working as a truck driver when he had a heart attack in 2014.   He came to the Houston VA for lifesaving treatment but struggled with fatigue and lack of energy related to heart failure ever since.  When his VA doctors suggested he may be a candidate for the CCM therapy, Clayton was immediately on board. He noticed a huge difference within days of the procedure.

“After having this surgery, I felt better both physically and mentally,” he said.  “My energy level has improved and I can think so much more clearly.   It’s like the difference between daylight and darkness.”

Heart failure is a progressive condition in which the heart slowly weakens and is not able to adequately supply oxygen-rich blood to the body.  According to the American Heart Association, about 6.5 million Americans struggle with heart failure. Obesity and diabetes are key risk factors, and the number is projected to increase significantly over the next decade.

“Even with optimal guideline-directed medication, heart-failure patients often still experience debilitating symptoms, like breathlessness and fatigue that make everyday activities challenging and can significantly diminish their quality of life,” said Dr. Glenn Levine, Houston VA Chief of Cardiology and a professor at Baylor College of Medicine.

CCM therapy, which involves minimally invasive surgery to implant a device into the heart, works by delivering precisely timed electrical pulses that allow more oxygen-rich blood to reach the body.  While somewhat similar in size and basic design to a pacemaker, CCM therapy is different in that it acts on the strength of the heart’s contractions rather than its rhythm, Levine said.    The device’s pulses, delivered in one-hour intervals five times a day, make changes to heart muscle at the cellular level, strengthening the heartbeat over time and reducing symptoms including fatigue and shortness of breath.

Army Veteran Kenneth Beam also underwent CCM therapy at the Houston VA earlier this month, with similarly positive results.   After surviving a bout of cancer a few years ago, Beam began experiencing symptoms of heart failure and made a Cardiology appointment.  As he was walking into the Cardiology clinic for his appointment, he collapsed. VA staff rushed to his aid.

“The cancer did damage to my heart and I just couldn’t breathe,” he said.  “They called a Code Blue on me and saved my life.”  Upon being discharged from the VA hospital after a few days, Beam continued to struggle with shortness of breath, fatigue and lack of energy related to heart failure before having CCM therapy.

“Before I got this procedure, it was hard to breathe and I had to use my nebulizer four times a day,” said Beam, a Vietnam-era Veteran from LaPorte, Texas.  “In just a few weeks, I already feel amazing and my doctors tell me I will get better and better every day. I can’t wait to get back out and ride my motorcycle again.”

Dr. Hamid Afshar, electrophysiology cardiologist and professor at Baylor College of Medicine, was thrilled to be one of the Houston VA doctors who performed the new CCM therapy on both Veterans.

“This new treatment can significantly improve our Veterans’ quality of life,” Afshar said.  “Seeing Mr. Clayton and Mr. Beam both getting around so much better after undergoing this procedure has been heartwarming for all of our staff and is an excellent result.”

CCM therapy is intended to improve the contraction of the heart.  It can be used in conjunction with medications and other heart failure therapies.

“While all patients benefit from medications for heart failure treatment, some patients may require additional measures” Afshar said. “CCM therapy is intended to improve the quality of life of patients with heart failure, so they can start doing the things they love again.”

Clayton earned a bachelor’s degree in Communications in 2020 and began a new career as a teacher this year.  He credits the CCM therapy with helping him reach his goal of mentoring young students.

“As an Army sergeant, I enjoyed mentoring young enlisted soldiers and now I get to do the same for students here in Texas,” he said.  “I’m so thankful for this treatment that the VA has given me … I feel like I have the energy of a teenager.”