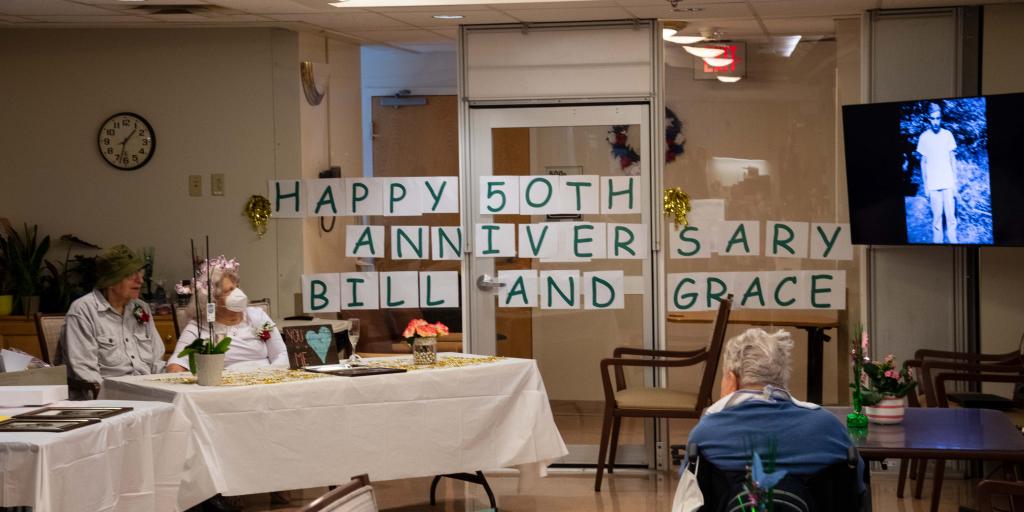 Retired Green Beret, Army ranger and paratrooper, Lt. Colonel Bill Smith married his wife, Grace, 50 years ago on April 1, in Suedberg Church of God in PA. This year, VA staff and residents celebrated their monumental achievement on Friday, April 1 with a celebration of their love and service.

While attending Columbia Bible College, South Carolina, in 1971, Bill heard there was a woman enrolled in the college who had just gotten back from serving as an Army civilian nurse in Vietnam. Curious about a woman who had served in the war also being enrolled at his bible college, Bill said, “I’m gonna go check it out.”

“50 years later, he says he’s still checking it out,” laughs his wife, Grace, while sitting at the head table in the Community Living Center’s recreation hall.

Guests gathered round to hear stories of the couple over the last five decades, most of which brought laughter and good cheer to all in attendance. One patron asked, “why did you get married on April Fool’s Day?!”

“While we were in school together at the Bible college, you needed to ask permission to get married,” said Grace. “And the only time we could find to actually pull it off was during spring break, which at that time, fell during the Easter holiday.”

“Nobody gets married on Good Friday, nor do they get married on Easter Sunday,” Grace recalled, “so the only day that was left was the Saturday in between, which just happened to be April 1st. But,” she added, “we don’t celebrate April Fools, because we’re no fools!”

This lighthearted attitude is what defined the couple during their marriage. Having spent several years in the United States Marines, Bill decided to go to Bible college. Upon completion of his schooling, Bill was asked to reenlist to serve time in Vietnam.

After an initial deployment to Vietnam, Bill was once again asked to reenlist, but this time he had a few conditions. “Bill said the only way he would come back is if they gave him a Green Beret unit to command,” regaled Grace, “and that is how he became a Green Beret.”

Retiring in 1999, as a Lt. Colonel, Bill and his wife focused their sights on their shared faith, dedicating most of their time to their “family” -- the parishioners of their church. Although Bill and Grace, never had children of their own, they found more family than they could have asked for in the community they supported.

While enjoying refreshments and cake, the attendants of this celebration were treated with a video montage of pictures and memories of Bill and Grace’s life together. When asked what their secret to success was, Grace replied, “I would love to tell you it was all roses, but that isn’t life. We had our hardships. We made a commitment to ourselves, and also to God, and that was something we would never give up.”

That commitment to each other, and the service they provided to their community and the nation, is the bedrock of who the Smiths’ are. The Lebanon VAMC wishes them more years of love and happiness.