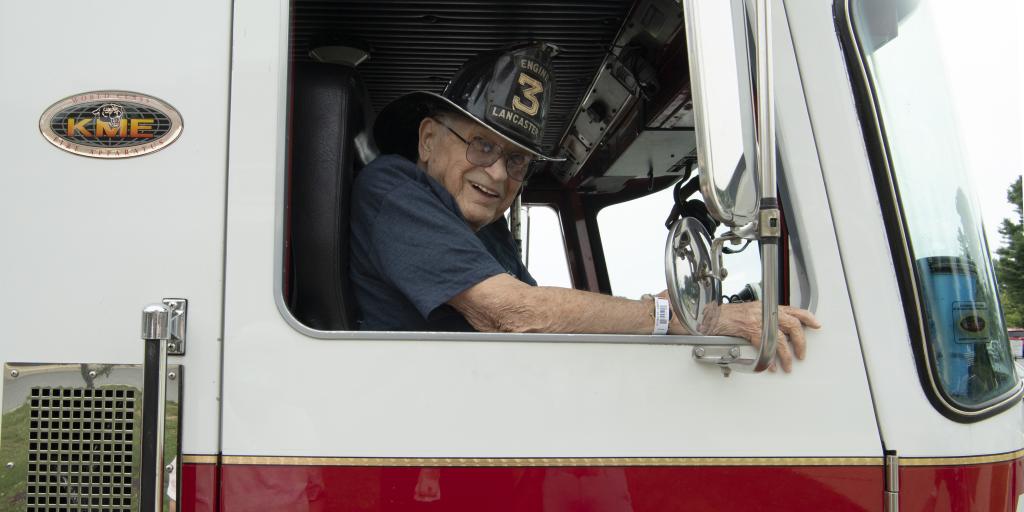 U.S. Army Veteran and retired Lancaster Fire Department firefighter, Lyle Schaller, was all smiles when hospice staff coordinated a trip back in time for him.
By Douglas A. Etter, Chief Communications Officer
September 14, 2021

Time travel is possible! Employees from the hospice unit at Lebanon VA Medical Center in South Central Pennsylvania can verify it.

So can firefighters from the Lancaster Fire Department where Lambert Schaller served for 25 years. In fact, anyone who saw the former Army Signal Corps member exchange stories with retired and current city fire department professionals, climb into Engine 5 or take a couple of laps around the medical center grounds with lights and sirens blaring know that Lancaster native was transported to not just around the medical center’s pristine campus but he was also transported back in time – to the happiest and most fulfilling days of his life.

Schaller was the tenth child born in his family. Six of his brothers and one sister served their country in uniform during WWII. One brother, a sailor, was killed in action in the Pacific. When Schaller turned 16, he tried to volunteer for the Army, but they wouldn’t take him because of his youth. When he turned 17, his father signed the necessary paperwork permitting his youngest boy to enlist. After basic training and signal corps school at Fort McClellan, Alabama, the Lancaster native was sent to be a part of the occupation forces in Japan. He was assigned to develop photographs and films which were then sent to Washington DC. Many of the black and white images, he was the first to see on film in the dim red light of the dark room, were from Hiroshima and Nagasaki. Some of them, were seared into his mind.

Schaller also crossed paths with some of the most famous people of that time. His office was only a block from the Supreme Commander of the Allied Powers, General Douglas McArthur, who the Specialist 4 describes as “a very strict Big Chief.” He saw the General coming and going three times a day and on Saturdays during drill and ceremony exercises on the parade field. He also regularly saw the Japanese Emperor Hirohito being driven places in an American made Cadillac, with an escort of American and Japanese military police.

At the end of his enlistment, the Lancaster native returned to his home and worked part-time in a camera shop until he passed the test to become a Lancaster police officer. “There were a lot of Veterans in the department at that time,” he said, “it was a natural fit.” He was “on the job” for 6 years, when his wife told him to find a job that wasn’t so dangerous – so he, perhaps counterintuitively, joined the Lancaster Fire Department.

The first duty position the Army and police veteran held was the “vacation man”. Schaller explained, “the vacation man filled in for whoever was on vacation or off duty. It was a great way to learn all the different duties of each fireman. It was hard and the other fellas didn’t cut you any slack, but you learned to do what needed to be done.”

Schaller, who attended Lancaster Catholic High School but never graduated because of his enlistment, recalled one bad fire at St. Joseph’s Catholic Hall. “It was early morning. We were on the balcony on the second floor. Me and another fella, opened the door and got blown backwards by a ball of fire. It was like somebody kicked me in the chest.”

It wasn’t the only time the firefighter ended up on his back. Once, long after he had hung up his bunker gear (the term used for the protective clothing firefighters use when actively fighting a fire), the retiree found himself at the bottom of his steps at home. He suffered multiple broken bones and internal injuries. After recovering at a local hospital, one of his family members suggested he enroll in VA’s health care system to save some money. “What the heck, I thought,” he said, “it couldn’t hurt, right?”

The man who knew personal sacrifice and danger was pleasantly surprised by his initial experiences as an outpatient where he received primary, audiology and optometry care. “They’re really nice and very friendly.”

Later, when the former firefighter needed hospice care, he was admitted to the Hospice Unit at Lebanon VA Medical Center. As the staff worked with the dying Veteran, who had completed an honor flight a few years before to see the World War II Memorial in the nation’s capital, they thought he would enjoy one last ride in a fire engine. Advanced MSA Brian Douillette, Jr. reached out to the Lancaster Department who was eager to help fulfill the request.

Chief Scott Little and a contingent of current and retired firefighters came to support the important mission. They met Schaller, his daughter Diane and number of hospice employees at the entrance of Building One in a shiny bright red engine. They gave the former Engine Number 3 driver a department T-shirt and then after assisting him to climb into the cab, they gave him an unforgettable transport back in time that everyone there saw reflected in Schaller’s smile.

Sadly, US Army Veteran and former Lancaster fire fighter and police officer, Lambert Schaller died before this story was published.