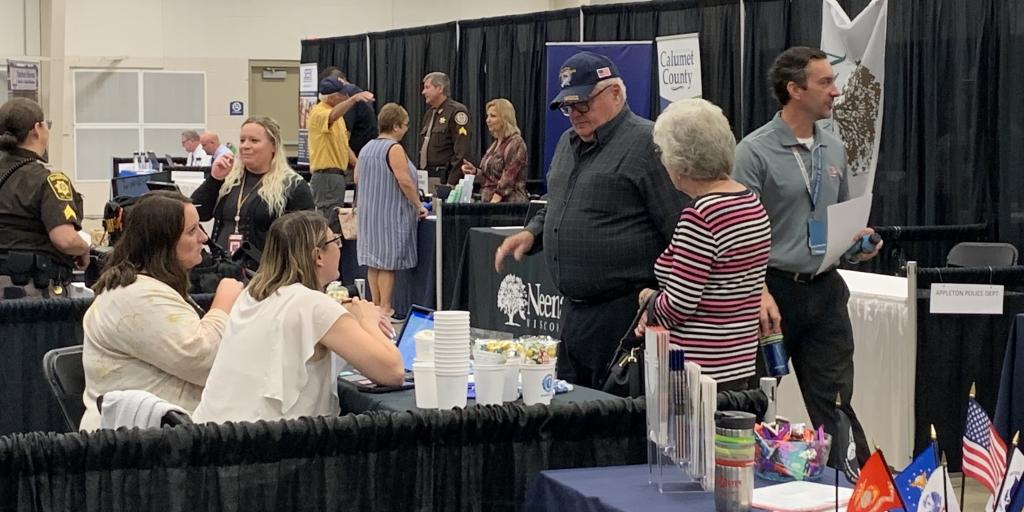 The unique event, which combined the Milwaukee VA’s annual Mental Health Summit with a resource and employment fair for Veterans, allowed participants to share what was working – and what wasn’t – when it comes to reaching rural Veterans.

“We got a lot of good ideas,” said Dr. Michael McBride, Milwaukee VA psychiatrist. “We heard that we need to do more.”

“There isn’t a huge community collaboration event like this that regularly occurs,” said Marissa Mielke, community engagement and partnerships coordinator with the Suicide Prevention Team through the Milwaukee VA. “We were able to make connections with all of these different organizations – local, state, federal, county – coming together for one purpose: to serve Veterans.”

To better serve Veterans in the Fond du Lac area, it was announced at the event that the Milwaukee VA would be opening an outpatient clinic in Fond du Lac.

The announcement was met with applause from the event attendees, as Fond du Lac-area Veterans currently find themselves about equidistance from VA facilities in Milwaukee, Appleton and Cleveland. It’s a drive many Veterans are loathe to take, or find it impossible due to disabilities or other health concerns.

One of those Veterans is Rick Patton, the Veterans service officer for Fond du Lac County who helped organize the event.

“I’m very glad it’s happening; that will help a lot of our Veterans here,” Patton said. “They’ll be excited for not having to drive as far.”

Patton said he was pleased with Tuesday’s event at the Fond du Lac County Fairgrounds, though he acknowledged that having the event on a weekday probably hurt attendance.

Still, he said he heard positive feedback from vendors as well as Veterans.

Mielke said the multi-pronged approach helped attract a variety of Veterans and their families, noting that those who came for the employment and resource fair could also benefit from the mental health discussions and vice versa.

“It was a nice way to bring people together who may have been avoidant of some of the other areas,” he said.

Mary Kolar, secretary of the Wisconsin Department of Veterans Affairs, lauded the “energy that is in this facility, all the focus on enhancing and improving and supporting the lives of Veterans and their families.”

She noted that about two-thirds of Wisconsin’s Veterans live in rural areas, and that the national suicide rate is about 20% higher for rural Veterans compared to their urban counterparts.

“The best way that we can address this is to get into communities and talk to those on the front lines about how to meet the unique needs of those who have served,” she said. “Every single death by suicide is preventable. I commend the many men and women on the front lines of this battle.

“To veterans in our rural areas who may be struggling, I want to tell you, you are not alone. Today's summit is an example of our concern for you. We want to get you and your fellow Veterans the mental health support you need to live a full and productive life.”

During breakout sessions, participants shared hurdles often faced by Veterans in getting the care they need. Some noted problems working with doctors, while others blamed government red tape.

Finding appropriate and timely care in the community was also cited as a problem.

“The message here is that we need to be doing more for Veterans. There's more work to be done,” McBride said. “And this whole summit is an effort to meet each other and to get ideas going. We're doing a lot of things right at the VA, but we’ve got a long way to go.”