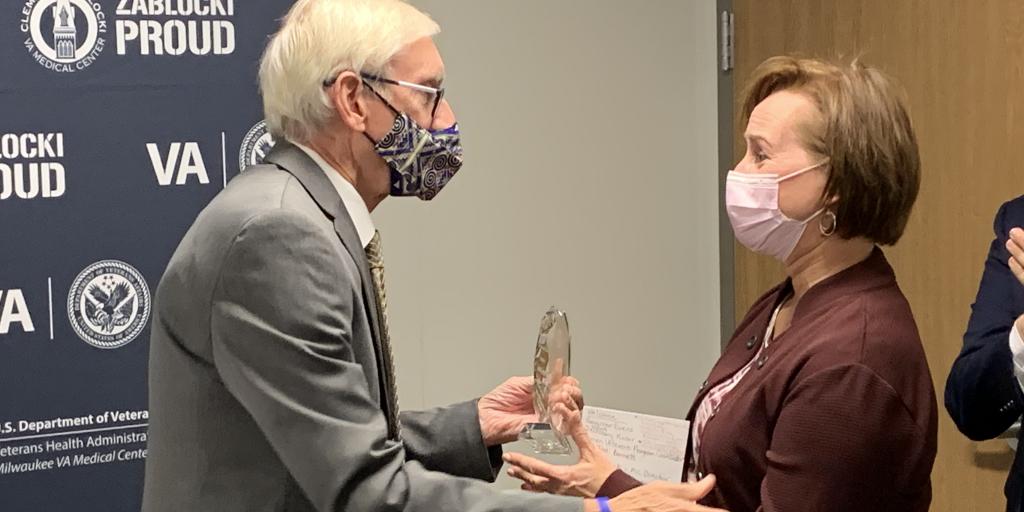 Those are just some of the words that describe Darcie Greuel, director of the Zablocki VA’s Post-9/11 Military2VA Case Management Program, who on Tuesday was named Wisconsin Woman Veteran of the Year.

“Those are all things that are near and dear to my heart,” Greuel said about the list of descriptors. “(They are) things I’m constantly trying to get better at, and (what) I help others aspire to as well.”

Greuel, who is also a lieutenant colonel in the Army Reserves, was honored by Wisconsin Gov. Tony Evers and Wisconsin Department of Veterans Affairs Secretary Mary Kolar during a private ceremony at the Milwaukee VA Medical Center. Family and co-workers were in attendance, as were soldiers from Gruel’s Reserve unit.

In presenting the award, Evers noted Gruel’s journey from 18-year-old enlistee in the Army to her current position, where she and her team at Zablocki help post-9/11 Veterans leaving the military make the transition to civilian life.

Along the way, Greuel has been an Army medic, serving humanitarian efforts in South America, and deploying to Afghanistan, where she ran a small combat support hospital.

At the Milwaukee VA, she worked as a nurse before taking over the M2VA program. And earlier this year, she led a group that marked the 20th anniversary of the 9/11 attacks with a memorial service in Wood National Cemetery.

In the community, Greuel volunteers her time to help seniors and the disabled. She assists Veterans on Honor Flights to Washington, D.C., and with the annual Milwaukee Veterans Day parade.

“Holy mackerel. What a life you’ve been living. Just extraordinary,” Evers said before presenting the award, saying Greuel is “an amazing example of outstanding service” to the military, fellow Veterans and the community.

“I have no idea when she sleeps,” Evers said. “You can see that her service to the community, state and country are vast and valuable. Wisconsin is a better place because of people like her.”

Greuel choked by tears in accepting the award and acknowledging Evers, Kolar and all those who support her.

“It's just such an absolute honor and pleasure to be recognized for the service and the work that I do,” she said. “Honestly, I never really think of it too much as being work. It's just kind of who I am and what I do.

“Aside from being a mom, which is probably my most important accomplishment in life, I would say my biggest passions are service -- caring for others, advocating for people who can't advocate for themselves -- and trying to influence change -- positive changes.”

Greuel said that continuing her military service in the Reserves while also working at the Milwaukee VA keeps her feet planted in “two really big doorways of two very complex governmental agencies … that are often closely connected.”

That double duty helps her relate to the Veterans she serves at Zablocki as well as the soldiers in her Reserve unit.

“It's so amazing … to be able to help service members and guide them when they're in times of need,” she said. “I can understand, and I can relate.”

Teamwork plays a critical role in her dual roles. And while she said she’s accustomed to leading, of being the person to raise her hand and volunteer, she’s quick to laud those she works with in the hospital and in the field.

“It's all about being a team: working together and having a shared vision and mission,” she said. “I’m just blessed to be a part of so many wonderful teams.”

Greuel said it’s rewarding when she sees Veterans she helped months or years ago come back and share their success stories.

“I've been told so many times I've made a really important impression on them or I've helped really change their lives,” she said. “There's just nothing in this world that is more meaningful than that to me.”

So is Greuel ready to slow down? Don’t bet on it.

“I enjoy my work so much; it's such a passion,” she said. “I’m feeling like I’m at the pinnacle of both of my worlds … so I feel like I have a lot of life left in me and hope that I can still continue to advocate and motivate and inspire people to want to be a part of change.”