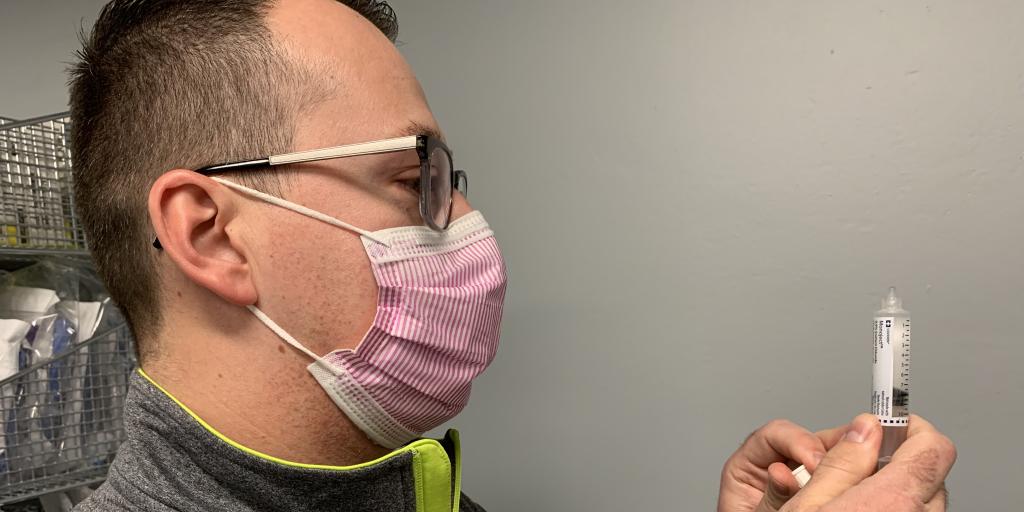 Those were Milwaukee VA Registered Nurse Jeremy Sauld’s words when he saw an air bubble forming in the syringe he was preparing for an IV.

That observation — and his subsequent actions — led to the recall of a defective device and national honors for Sauld.

But more than that, it likely helped save the lives of patients across the nation.

As the special lines coordinator at the Milwaukee VA Medical Center, Sauld, 38, is part of the vascular access team, dealing with all manner of IVs, including peripherally inserted central catheters (PICC lines), ports and other catheters.

He’s an expert in the field. Before coming to the Milwaukee VA in February 2021, he was a nurse educator, traveling to hospitals to teach others about PICC lines.

He had been at the Milwaukee VA for about a month when he made the discovery.

When prepping an IV line, the tubing and syringe are put in place, and then the syringe plunger is pushed until the liquid comes out at the end of the line. This clears the line of any air.

But on this day, Sauld prepped a line and put it down. Then he saw an air bubble start to form in the tube.

“I saw it retract all the way back through the tubing and … into the syringe,” he said, noting that this wasn’t a tiny air bubble. “It was a pretty good-sized air bubble, probably a couple of cc’s.”

Because the syringes in question are used for numerous IV lines — including central lines that go directly to the heart — Sauld knew he had discovered a serious problem.

“You could kill someone,” he said. “You could have lots of issues ensue from that, including a stroke or multiple complications for a patient.”

Sauld documented what he saw, and with the help of nurse educator Irina Stein, created a video of the process. Then came the next step: figuring out the extent of the problem and how to fix it.

After consulting with his team, Sauld began to check other syringes in the hospital’s stock with the help of Lisa Geiger, inventory management specialist.

“We just started going into boxes, trying to find different lot numbers to see which ones were bad,” he said. “We discovered that all of those syringes we had in stock were having the same issue.”

Sauld completed a Joint Patient Safety Reporting submission while Geiger and the team in Supply Chain Management moved to pull all the defective syringes from throughout the hospital and find suitable replacements.

Stein said the syringes were “all over the hospital,” but staff in Supply Chain Management worked quickly, noting that within three days, all the defective syringes had been replaced.

“It was truly a quick turnaround,” she said.

“That was awesome,” he said. “I was really happy to see, from a patient safety standpoint, that we were able to move so quickly on something that could be detrimental to patients.”

But getting the defective products off the hospital shelves wasn’t the only pressing matter. Sauld knew this was likely a problem in hospitals across the country.

So he contacted the FDA through its MedWatch program and also alerted other VA hospitals.

Later that summer, Sauld learned he was one of 37 health care providers across the country who had contacted the FDA about the syringes. These reports led to the recall of approximately 267 million syringes.

And best of all, no injuries were reported due to the defective devices.

Sauld’s actions did not go unnoticed.

The hospital’s Patient Safety division saw Sauld’s report and knew it was unusual — especially Sauld’s vision and work to make sure the problem was addressed not only in Milwaukee but throughout the country.

“His work was absolutely incredible’” said Patient Safety manager Anna Jozefiak. “This stuck out to us so much because it was so remarkable, especially considering he had just been hired.”

Sauld’s story was forwarded to the National Center for Patient Safety as well as Milwaukee VA’s High Reliability Organization staff to be considered for one of the quarterly HeRO awards.

HeRO awards are given in four categories. Nominees from the individual VA medical centers are submitted to their Veterans Integrated Service Networks, and from there the VISNs select those to be forwarded to the national level.

All the VISN-level submissions are considered, and four winners — one in each category — are chosen. Sauld is the first national award winner from the Milwaukee VA, selected from 60 nominees — all of whom had won at the local and VISN levels before being considered for national honors.

“It was phenomenal,” Jozefiak said, noting that Sauld’s work was the epitome of the tenets of High Reliability Organizations. “The work he was able to do led to a national recall.”

“It was extraordinary,” said Lindsey Ladell, High Reliability Organization program manager for the Milwaukee VA. “He kept digging and networking. You don’t see that often. It was exceptional.”

Many times when employees detect a problem, Ladell said, they pass it along to their superiors and then wash their hands of it. Sauld didn’t do that.

“Jeremy not only reported the problem, but he solved it,” Ladell said. “It wasn’t just us prompting him. Jeremy knew, intuitively, how widely this (device) is used and how big of a deal this could be. He knew it needed to go beyond here.

“It was a behavior we want to reinforce with high reliability: We want people to be problem solvers, to speak up for safety. To be able to share his story on a national level is incredible. Jeremy is so deserving of the recognition.”

Sauld will receive his award during a virtual ceremony in March.

“It’s super cool,” he said, noting that nurses are trained to think critically and do what they can to assure patient safety. “As a nurse, it’s the little things … that can really have a big impact on patients.

“It’s cool to think that I took part in preventing something that, potentially, could have been extremely detrimental to a patient.”