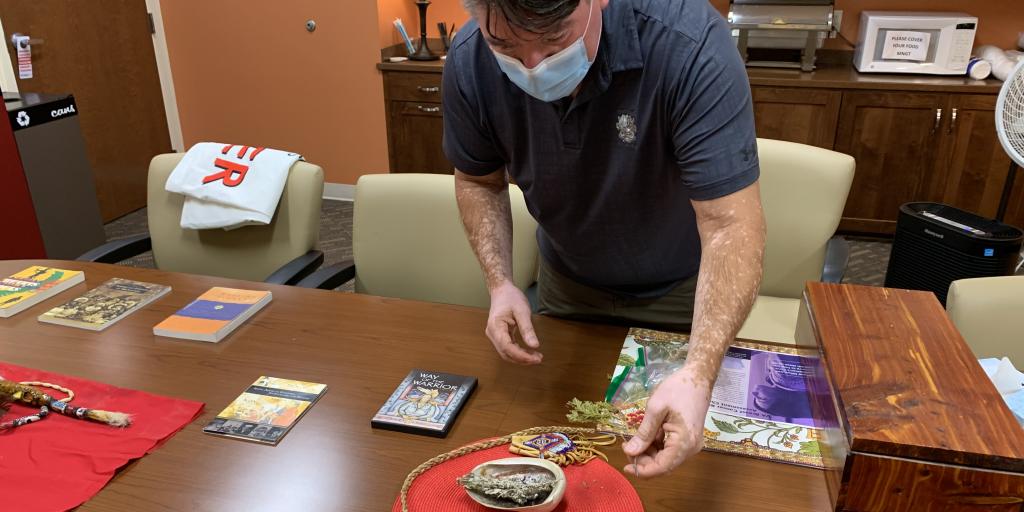 We know different cultures have different beliefs, and to render the best care possible, health care providers should understand and respect those beliefs. It should be no different for Native Americans, according to Rodney Pearsall.

Pearsall, a Readjustment Counseling Therapist with the Milwaukee VA, wants to improve care for Native American Veterans, and a big part of that is educating health care providers and others about the traditions and beliefs of a group that is often misunderstood and stereotyped.

“There are so many cultures in life. It’s important for Native Americans to be understood as a culture,” Pearsall said.

A first step toward fostering better understanding of Native American Veterans will be a lunch-and-learn session set for noon Nov. 9 at the Milwaukee VA. During the session, Pearsall will explain some Native American traditions, history and customs and emphasize why they are important in health care.

He hopes to offer similar sessions on a bimonthly basis.

The sessions are part of Pearsall’s new role as Native American outreach specialist for the Milwaukee VA. Few VA medical centers have such a specialist, and Pearsall’s primary goal is educating hospital staff about the particular needs and beliefs of Native Americans.

“VA reached out to me because they wanted to improve their care for Native American Veterans,” said Pearsall, 57, who belongs to the Chiricachua Apache Nation. “I go out and find out what the needs are, and then we work at addressing those needs.”

In the coming months, Pearsall plans to meet with the 12 Native American nations in Wisconsin. In addition, he’s working with the Gerald L. Ignace Indian Health Center in Milwaukee, with the goal of making the center part of VA’s community care partnership.

At the same time, there’s been little effort put forth by VA to understand Native Americans’ unique culture and incorporate that into providing care and benefits.

“There’s always been a need, but we’ve never had a working relationship (with Native Americans),” Pearsall said. “How do you engage a culture of which you have no education or knowledge? That makes it really hard.”

Pearsall can cite numerous incidents in which a lack of knowledge of Native American customs led to incorrect assumptions or adverse outcomes for the Native American:

“Education plays an important role in care,” Pearsall said. “We have to ask, ‘How has this particular culture dealt with mind, body and spirit? What customs and traditions do they have?’”

And he wants to provide resources to staff so they can learn and get what they need to better serve these Veterans.

“The overall goal is improving care — physical, emotional and spiritual,” Pearsall said. “Understanding the culture, history and traditions of Native Americans is very important; it shows respect and that you care.”