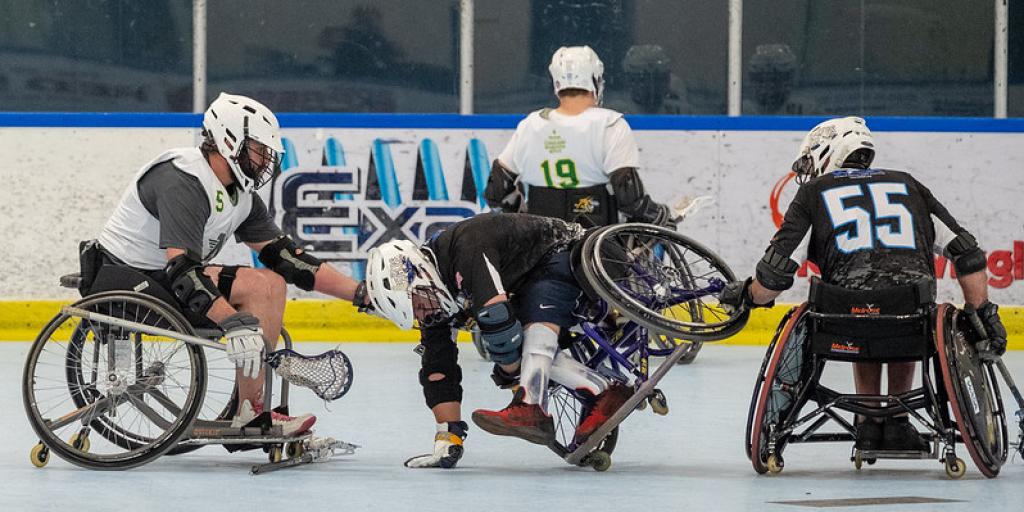 But because parasports are a relatively new phenomenon, research into injuries unique to wheelchair athletes has been scarce.

Dr. Ken Lee, head of the Spinal Cord Injury Center at the Milwaukee VA Medical Center, along with other VA doctors, have collaborated to publish a book on wheelchair athletes and concussions.

“Concussion Management for Wheelchair Athletes” is available through Springer Link.

The book was funded through the VA Adaptive Sports Grant Program by the National Veterans Sports Programs and Special Events Office and the Paralyzed Veterans of America Education Grant, which were processed through Medical College of Wisconsin, Department of Physical Medicine and Rehabilitation. The project was the product of a partnership between the medical school and the Milwaukee VA's Spinal Cord Injury Center.

“This is the first concussion book for wheelchair athletes," said Lee, who is also an associate professor at the Medical College of Wisconsin. "Since there was nothing out there, people are not as aware, so we wanted to share that awareness.”

Lee has long been a proponent of wheelchair sports, which can include some rough-and-tumble activities, such as rugby, lacrosse and basketball.

By watching – and even participating – in these games over the years, Lee began to see incidents of possible concussions.

“We realized we were missing concussions with these athletes,” he said. “As we looked into it more, we started doing research and realized we needed to do bigger awareness.”

How to assess concussions

For ambulatory athletes, the initial signs of a concussion include stumbling and loss of balance. Such symptoms don’t present for wheelchair athletes.

In addition, most concussion testing requires the subject to be standing.

So how can wheelchair athletes be assessed if the current testing doesn’t apply to them?

Harper, who began working with wheelchair athletes in Milwaukee while a student at the Medical College of Wisconsin, said he found an athletic trainer’s doctorate dissertation that laid out a wheelchair scoring system similar to a balance scoring system. This required the subject to do a wheelie in the wheelchair.

This was the start of developing a more thorough test, Harper said.

“We started with a four-page checklist that turned into a 27-page document,” Harper said.

The testing was implemented at the National Veteran Wheelchair Games in 2019.

A major factor of the testing is establishing a baseline, Harper said, meaning putting the athletes through a series of tests before the games began.

“Each wheelchair athlete is unique,” he said, noting that while a headache may be an indicator of a concussion, some athletes may have chronic headaches, so knowing that in advance of competition is vital.

At those games, doctors were able to test 81 athletes before competition began and use the data to further refine the testing.

“We realized we had to ask some more experts, so we looked for those with expertise in adaptive sports and concussions,” Harper said. “We put together quite a robust list.”

Those experts – about two dozen – contributed to the nine chapters in the book that cover baseline testing, evaluation of symptoms and cognitive exams as well as how to assess if an athlete is able to return to play.

It concludes with the “Wheelchair Sports Concussion Management Program,” which can be pulled from the book and used by coaches, trainers, athletes and others at wheelchair sports sites.

(A PDF of the concussion management program is available for free by clicking on "Table of Contents" on the Springer website and then clicking the PDF download button next to "Back Matter.")

A resource for all

The book is for anyone involved in wheelchair athletics, from participants to coaches, families and sideline supporters, Lee and Harper said.

“We want it to be a resource for coaches and others in the community so they have a better understanding of concussions,” Harper said. “It’s designed to be used by anyone involved in wheelchair sports.”

Lee and Harper said they hope the book sparks further research into the subject area.

“There’s a ton of research on able-bodied athletes, but not on athletes with disabilities,” Harper said. “And when you add in the extra wrinkles of people with disabilities – different physical and cognitive abilities – it is difficult to navigate.”

And Lee said the research is needed to keep the growing number of wheelchair and para-athletes safe.

‘The parasports world is getting bigger and bigger,” Lee said, noting how para-athletes are becoming more prominent in sports compilations and advertising.

Harper said it is gratifying to see a germ of an idea that started six years ago ramp up to become a valuable resource for the wheelchair sports community.

“I’m proud of what we’ve been able to achieve,” he said. “We have to know how to treat these athletes. Hopefully this will encourage others to do more research.”