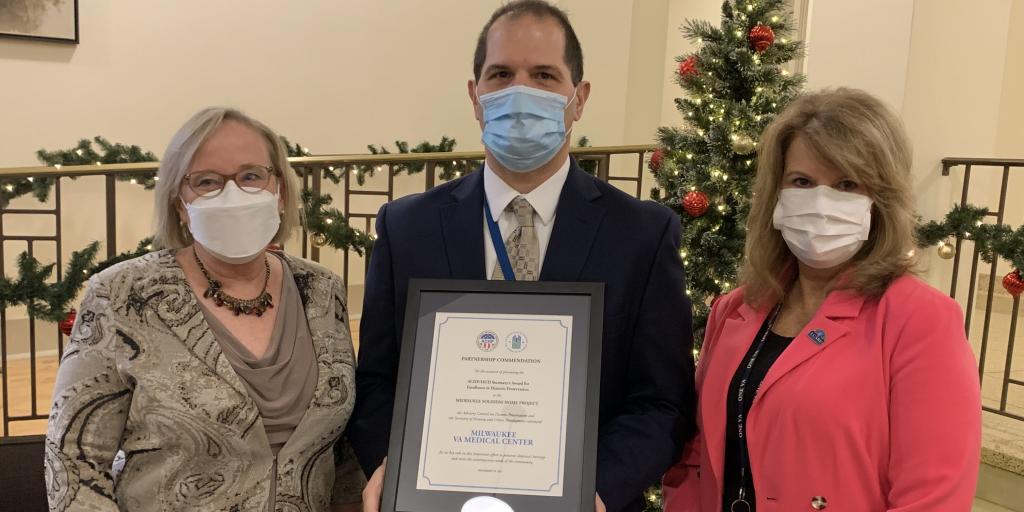 Milwaukee VA Medical Center Director Dr. Daniel Zomchek, center, displays the award the medical center received for its role in the renovation of Old Main into housing for Veterans at risk of homelessness. With him are VISN 12 Director Victoria Brahm, right, and Assistant Under Secretary for Health for Operations Renee Oshinski.
By David Walter, Public Affairs Specialist
December 16, 2021

The renovation of Old Main into housing for Veterans has reaped a prestigious national award.

The Milwaukee Soldiers Home, on the grounds of the Milwaukee VA Medical Center, welcomed its first residents in March after an 18-month renovation project, which was the culmination of a 10-year odyssey to save the historic structure and return it to is original purpose – serving Veterans.

“This is such an honor,” said Jon Beck, development project manager for The Alexander Co., which spearheaded the renovation project. “This is a wonderful way to finish the year.”

“I think this is a momentous day, the culmination of so many years of effort from so many different organizations in the best interest of our Veterans,” Zomchek said, noting the facility is only steps away from a myriad of VA health services. “And VA health care is second to none.”

Opening in 1867, Old Main was one of the original three soldiers homes built in the U.S. to care for Civil War Veterans. It was shuttered in 1989, and the building fell into disrepair. When a large hole opened in the roof, exposing the interior to the elements, many thought the building could not be saved.

But a number of local, state and national agencies came together to hatch a plan to restore the building, along with five other buildings on the Milwaukee VA campus, so they could serve Veterans once again – specifically as housing for Veterans at risk of homelessness.

Planning began in 2010, and by the fall of 2019, ground was broken for the construction project, led by developer The Alexander Co. with JP Cullen serving as general contractor.

The Alexander Co. financed the $44 million project through use of no less than 13 different capital sources, including federal and state historic tax credits. Many other partners, including more than 650 individuals and organizations, donated to the project through a fundraising campaign.

The six restored buildings opened in March, providing 101 housing options, from duplexes for families to single-occupancy apartments. To date, 95 units are occupied.

“This extraordinary project was a true labor of love that brought together a community for the benefit of America’s Veterans,” ACHP Vice Chairman Jordan Tannenbaum said.

“The goal was not only to provide quality housing for Veterans but to retain the historic integrity of the buildings, right down to rehabilitating the original pool table and the elaborate mailboxes in the post office.

“This project is a shining example of collaboration, creativity and perseverance in preserving significant historic buildings.”

“Homelessness is a major crisis facing our Veterans, and because of this work, more than 100 Veterans and their families in Milwaukee will have access to a safe, quality, and affordable home,” she said.

The project involved not only VA, HUD and historic preservation groups, but also the Wisconsin Housing and Economic Development Authority as well as the Housing Authority of the City of Milwaukee.

“If you are looking for an example of a project that brings together the community, that values our history, that pays tribute to our Veterans and shows that government at all levels can work cooperatively, this is absolutely the right project,” he said.

“This has been not only a labor of love, but it is a tremendous architectural and historic achievement to do what has been done to these buildings. It is nothing short of amazing to see the transformation that has taken place here.”

“The result of this collaboration is truly spectacular,” he said. “This demonstrates the benefits of historic preservation and the success of public-private partnerships.”