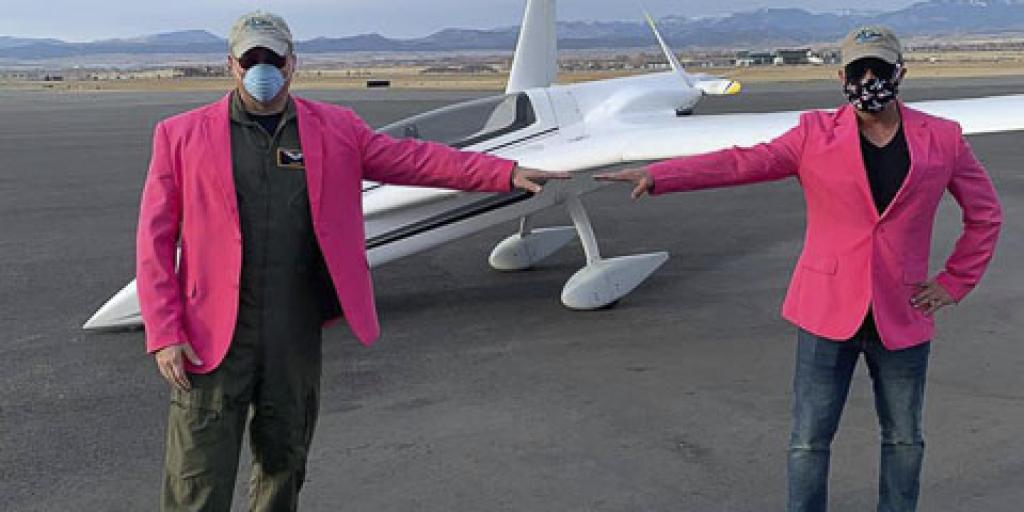 Pilot and VA employee Kevin Danz is right in the mix of the Howling for Health Care trend to recognize health care workers and first responders during the current health crisis.

From Denver to Seattle to Helena, Montana to Austin, Texas, people are “Howling for Health Care.”

The howling trend recognizes health care workers and first responders during the Coronavirus outbreak. It started on social media, as many trends do now, and pilot and VA employee Kevin Danz is right in the mix.

Danz is a Montana native from Bigfork who spent time on his grandmother’s ranch near Lewistown.

“I was 7 years old and they had a crop duster come to our ranch,” Danz said. “I knew from that day that I wanted to be a pilot.”

Danz joined the Air Force straight out of high school, worked at USAF Survival School, and then was accepted to Army Officer Candidate School (OCS).  He attended the University of Montana and joined the Army National Guard as a second lieutenant. Danz has worked for the Department of Veterans Affairs since 1999 and loves being involved in the lives of Veterans, while supporting his co-workers throughout the state.

After coming to work for the VA, Danz realized that he could help the VA faster and easier by flying to clinics beyond a 200-mile radius from Helena. After gaining the necessary permissions, he ended up as only one of two pilots authorized to fly for the VA.

Montana is often referred to as a “Frontier State” and nothing exemplifies that more than the hour and 45-minute flight from Helena to Plentywood that would have taken 12 to 14 hours of driving - weather permitting.

Danz, an IT specialist for many years, assisted in the application that made Montana one of the two states for the telehealth pilot program.

“I was able to implement telehealth throughout Montana via the IT program,” Danz said. “I’m proud of the 19 years I spent in the VA IT department and how telehealth has helped rural Veterans get the services they needed.”

In one instance, the camera on a telehealth device broke, Danz recalls. A Glasgow, Montana Veteran was suicidal and needed telehealth services that day. Danz flew to where he needed to go, fixed the camera and had the Veteran on telehealth, all in the same day. The then-director of the Montana VA showed his appreciation for Danz’s work by picking him as one of three people to have lunch with the Bob McDonald, U.S. Secretary of Veterans Affairs at the time.

“The telehealth program throughout Montana means the world to me,” Danz said.

Danz’s connection with the VA extends to his family. As the VA IT guy, Danz used to have to drive to different clinics to install software in the era before remote connect. On one such trip to an outlying clinic, Danz met his wife, Denice, who was an intern at the time. Denice now is a clinical pharmacist with the VA and the couple have three children, Alexis, 20; Austin, 13; and Aiden, 7.

Danz also owns a drone business which has opened additional doors for him.  He currently is Montana’s first “Special-Deputy,” conducting all drone operations for the Lewis and Clark County Sheriff’s Office and SWAT team. One of his videos has more than 16 million hits and was featured on Good Morning America and other national news programs. Danz recently attended VA Voices and created a video for his presentation that now is used at the national level.

“I love creating a story that instantly grabs your attention and you connect to it by using our drones, music and cinematography skills," Danz said.

So, how did Danz get into howling at 8 p.m. every night for health care?

“I saw an opportunity to help increase the morale and spirits of our local community and state by using our plane. We mentioned on social media that we are inviting true Montana leaders as our passengers, such as Helena’s mayor and next week our county sheriff,” Danz said. “I volunteer with Curtis Grevenitz, a local weatherman for KTVH, on different charity projects and I invited him to fly with me in my plane for the trending  Howling for Health Care.”

And fly they did and continue to do, twice a week at 8 p.m. “I’m passionate about helping people keep their morale high and supporting the team attitude. I love being out there, as a cheerleader for the healthcare industry, at 200 miles an hour.”