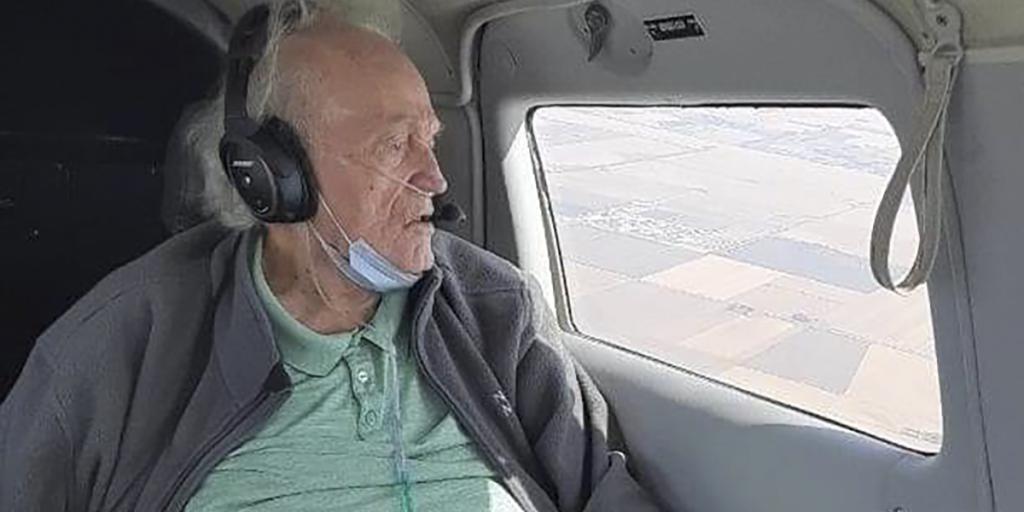 GRAND ISLAND, Neb. – Donald Wilson dreamed of flying… of experiencing the exhilaration of air beneath his feet, the sounds of wind passing by his body, and the sight of the rolling landscape unfolding below him… for just one more time.

Wilson is a former U.S. Army Airborne artillery surveyor who served in South Korea from 1952-54. A native of Omaha who briefly served at Fort Bragg, North Carolina, before transferring to South Korea, Wilson successfully completed 32 jumps with the 82nd Airborne Division during his time in the Army.

Time then passed, as it does.  Yet, although his military service retreated into memory as the years wore on, Wilson never quite forgot the feelings of freedom as he dangled beneath the billowing silk of a parachute, floating back toward the safety of the earth below.

Flying… yeah, that was definitely one thing that Wilson longed to do at least one more time.

On Thursday, Oct. 20, the staff of Grand Island’s VA Medical Center Community Living Center worked to make Wilson’s dreams a reality when they arranged for him to take a flight in a small aircraft from the Grand Island Municipal Airport.

According to Alison Dillon, a recreational therapist at the Grand Island VA CLC, she first met Wilson when he transferred to her facility from Omaha. She soon learned about his one wish.

“When we discussed his bucket list items, he stated that he would like to go up into a plane one last time,” said Dillon.

Fortunately, Dillon and her team had a few ideas on how to make this dream come true. Chaplain Lonnie Logan, who had recently retired from the VA, was a private pilot who owned a plane. When Dillon approached Logan about the request, he quickly offered to donate his time, plane and fuel.

Dillon also talked with Wilson’s family as well as his medical care providers to see if they would support the request. Both also quickly agreed.

So, on a bright and clear Thursday afternoon, Logan and his plane met Wilson and an accompanying nurse for the flight at the Grand Island Municipal Airport. And, for the next half-hour or so, Wilson once again felt the sensations of soaring above the clouds and seeing the world spread out beneath his eyes.

“I was told he was smiling from ear-to-ear throughout the flight,” said Dillon. “You could tell that he really enjoyed flying. He also talked about his time in the Army and how he had never flown in a plane quite that small. In fact, he kept joking that should’ve brought a parachute so that he could try jumping again.”

“It was super,” said Wilson, adding that he thanked everyone involved for helping grant his wish.

Later, Dillon said she felt incredible satisfaction in having made a Veteran’s dream come true.

“It felt good to give back to someone who sacrificed so much and served all of us,” said Dillon. “To be able to do something like this… to make Veteran’s wish come true… you know, that’s what we’re here for. And it feels really go to do this for him.”