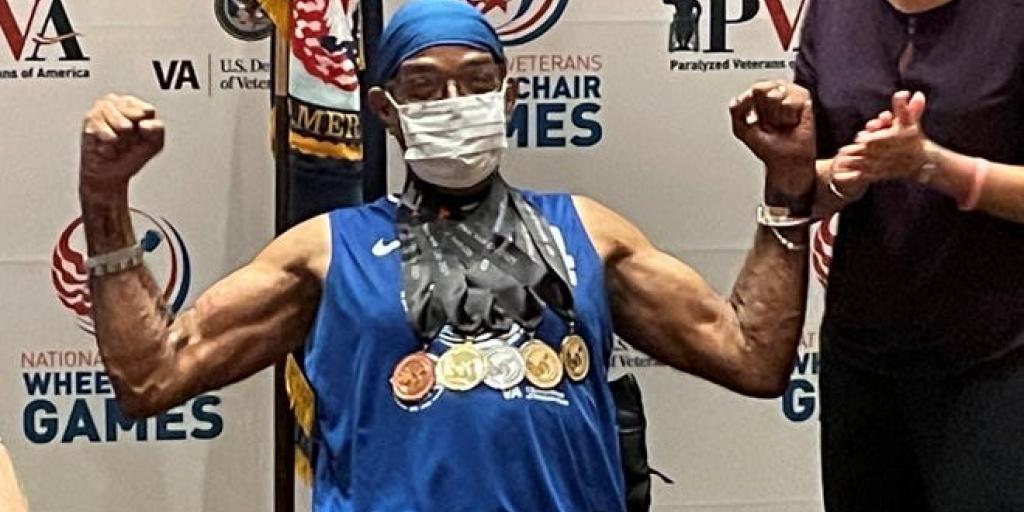 Longtime Union Beach resident Patrick Terry overcame addiction and the loss of his lower right leg. Now he motivates others to 'get off your butt.'

At first, the bad news hit Patrick Terry hard: His right leg would have to be amputated below the knee due to an infection.

“I cried for about half an hour that day, sobbing,” he said.

Then he remembered something a mentor taught him: the Serenity Prayer.

That was 2009. Terry, a U.S. Navy veteran and longtime Union Beach resident, accepted his condition. Then he sought to make the best of it by participating in adaptive sports. His quest reached an apex last month, when he won six medals — three gold, one silver and two bronze — at the National Veterans Wheelchair Games in New York City.

“My family and the people that know me are proud of me and just overwhelmed that I could do this,” he said.

From addiction to adaptive sports

Originally from Yonkers, N.Y., Terry competed in football and track in high school and enlisted in the Navy in 1969, serving aboard the USS Albany. He later served in the U.S. Navy Reserve and worked for New York City’s Department of Transportation, paving and milling roads.

By 2005, he was in need of help for alcohol and drug addiction. A sponsor in a 12-step recovery program introduced him to the Serenity Prayer.

“That freed me to be the person I am,” Terry said. “I now have 16 years clean and sober. I used to blame everybody else for my problems. The problems, they were with me.”

In 2009 he joined the East Orange Thunder, an adaptive sports team comprised of veterans and founded by Ralph Jones, a recreational therapist with the Veterans Affairs New Jersey Health Care System.

“He picked up on all the adaptive sports quickly,” Jones said. “He’s just a natural athlete.”

Jones has been taking his athletes to the National Veterans Wheelchair Games for more than 25 years.

“They’re amazing,” Jones said. “I’m the one trying to help them survive life after injury, but you know something? They help me. They show me what toughness is. They make my life better.”

'Get off your butt and get involved'

At the 2021 Games, Terry won gold medals in the javelin, discus and shot put. He took silver in nine-ball (billiards) and bronzes in table tennis and basketball.

Perhaps just as important, he encouraged teammates, most of whom are younger and newer to adaptive sports. Terry has an outgoing, engaging personality.

“I call him a peer specialist,” Jones said. “It takes that (personality) to survive. You don’t want people sitting in the house and having the walls close in on them. It’s an adaptive world; you can get up and live.”

Patrick Terry is living. He’s in a bowling league in Hazlet, he’s a painter, and he’s picking up weightlifting for the 2022 National Veterans Wheelchair Games in Arizona.

“I tell other veterans, get off your butt and get involved,” he said. “It doesn’t matter if you win or lose; it’s how you go out and compete. And meeting new people, that can change your attitude and how you feel about life. That’s a blessing.”