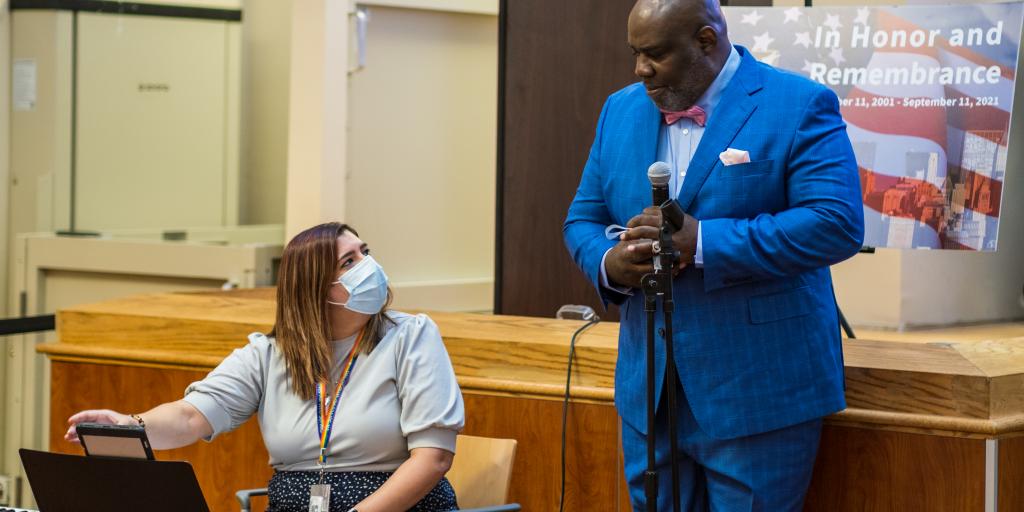 As patients and staff solemnly commemorated the 20th anniversary of September 11th during a ceremony held at the Margaret Cochran Corbin Campus of the VA New York Harbor Healthcare System, Veteran and spoken-word poet Eugene Thomas Jr. shared his perspective of that fateful day.

“When 9/11 happened, I was incarcerated,” Thomas said. “Some of the inmates I was with said some truly horrible things and I wasn’t in a position to share how I felt. I couldn’t even pretend to feel what they felt. And something just clicked – I don’t belong here. It set me on my path to redemption.”

A combat communications specialist who participated in Desert Storm with the US Army, Thomas struggled with drug addiction and post-traumatic stress disorder.

“I was stuck in a rut that was destroying my relationship with my family, especially with my 13-year old son,” he continued.

About five years ago, Thomas found his way to VA New York Harbor where the collaborative nature of VA healthcare provided Thomas with the resources to begin his long path toward sobriety.

One of those resources was the Recreation and Creative Arts Therapy Program at VA New York Harbor, where he met Music Therapist Sarah Pugliese.

“It has been an honor to support Mr. Thomas’s creative expression through music therapy. I enjoy witnessing his creativity and his dedication to making beautiful poems and pieces of music. I am so glad that our time together has been helpful in his recovery,” Pugliese said.

“Music has been with me through every trying episode of my life, but I am just amazed at how any doors opened through creativity. I can’t thank Sarah [Pugliese] enough,” Thomas continued.

Since setting on the path toward redemption, he’s leaned into his creativity by becoming a spoken-word poet and by publishing a book. He’s also toured through public school auditoriums up and down New Jersey dissuading at-risk youth from following in his earlier, more perilous footsteps.

When Thomas finished his poem, the dual-meaning – optimistic and hopeful – wasn’t lost on any of us:

“That morning began my transformation… what you hear is resilience… the heartbeat of one nation.”