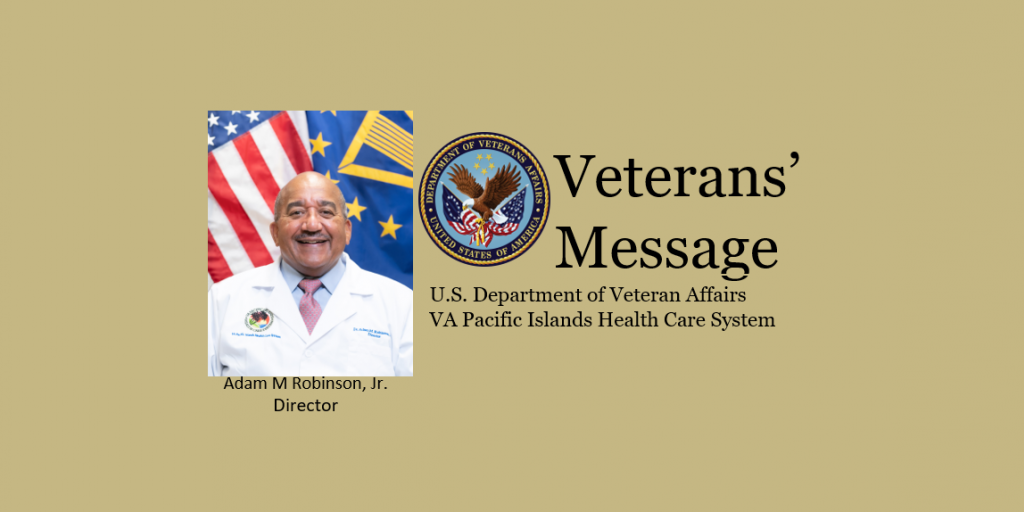 Last week VA Pacific Islands Health Care System was visited by a delegation of leadership from The American Legion. The American Legion and VA have always supported each other, and I enjoyed the opportunity to renew our friendship as colleagues in service of our veterans.

On December 7th, I also attended the ceremony for the 80th Anniversary of Pearl Harbor. It was a very moving memorial to the men and women who were lost or injured in the attack, and I was honored to be able to participate.

As the holidays approach, many of us are looking forward to spending time with friends and family. Getting vaccinated will help to make holiday gatherings safer for everyone. VA Pacific Islands Health Care System will be holding a vaccine event on December 18, 2021 from 7:30 a.m. to 5:00 p.m. at the Spark Matsunaga Ambulatory Care Center. With the more contagious Omicron variant now present in Hawaii, it’s essential that everyone gets vaccinated and gets their booster shots.

In addition to COVID-19 booster shots, VAPIHCS will also be taking appointments for flu shots at this event. Getting your seasonal influenza vaccine is still the best way to prevent serious illness from the flu.

On December 18, 2021 the State of Hawaii will pay tribute to a veteran named John Henry Felix who started his life as a shoeshine boy on Bethel Street in Honolulu and dived for coins at Pier 10. His accomplishments are too many to name, but include becoming an Eagle Scout and serving as the inaugural chair of Hawaii Public Radio from 1979 to 1985. John is a decorated veteran who served in the Army during the Korean War followed by service in the 442nd Infantry Reserves. He also served as the Chief of Staff, the Military Aide and Chief of Protocol for Governor Quinn, retiring with the rank of Colonel from the Hawaii State Guard. John Henry spent 17 years as a reserve officer with the Honolulu Police Department, and chaired every major City & County of Honolulu board or commission but one (HART). During the Vietnam War he served as a non-combatant in the League of Red Cross and Red Crescent Societies. John also served as Wing Commander of the USAF-Civil Air Patrol's Hawaii Wing, and was an Air Force Academy Liaison Officer.

For veterans, the most important reason to honor John Henry Felix is his donation of land to the Hawaii State Veterans’ Cemetery. This gift of 35 acres of land allows veterans to be buried with their compatriots for years to come in a beautiful spot in Kaneohe. I’m proud to honor him and all of our veterans.

Please remember to call 1-800-214-1306 and schedule your COVID-19 Booster shot. Getting the vaccine is still the best way to defeat this virus.