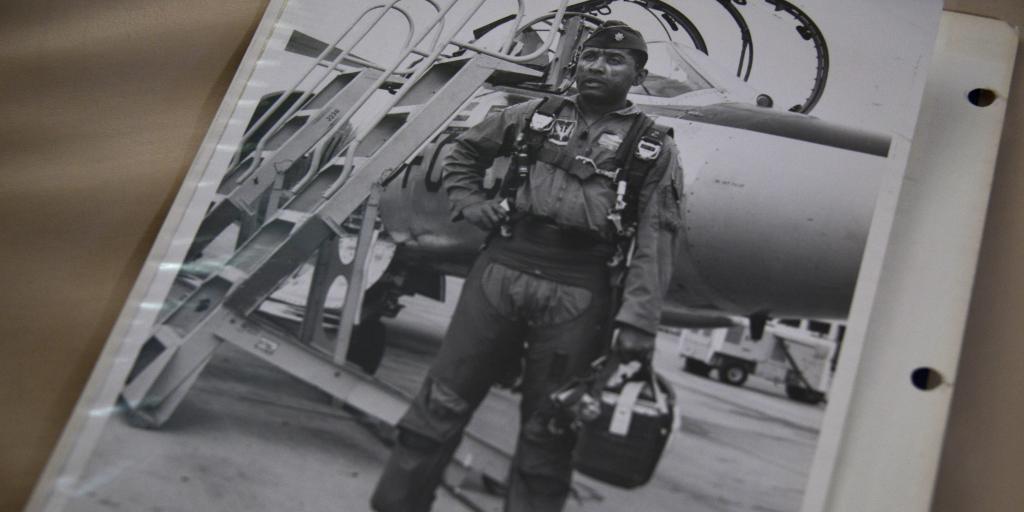 Memorabilia and items covered the walls in his home, showcasing a humble man with a distinguished and notable military career.

“I don’t have a real exciting story,” said Asa Herring, Tuskegee Airman and retired United States Air Force Lt. Colonel. “The most exciting things that ever happened to me were probably my aircraft accidents. I flew a lot of planes and had my share of crashes, but I walked away without a scratch each time.”

Asa was born on October 3, 1926, in Dunn, North Carolina. He is the sole remaining Tuskegee Airman in the state of Arizona’s Tuskegee Airmen Archer-Ragsdale Chapter.

“I knew I wanted to fly when I was a young child,” he said. “While I was in North Carolina I remember a B-17 flying overhead and how much it scared me. I think that was the point when I became hooked.”

Asa’s military journey began when he joined the United States Army Air Forces as an active-duty Tuskegee Airman aviation cadet on December 27, 1944, at the tail end of World War II. A few short months later on April 26, 1945, the 332d Fighter Group (first African American fighter group) flew its last combat mission. Then, on May 8, 1945, Germany surrendered, and the role of the Tuskegee Airmen and the Red Tails dwindled.

In total the Tuskegee Airmen had flown more than 15,000 individual sorties and spent more than two years in combat.

Asa didn’t want to be a part of a segregated military and wanted to further his education, so he decided to get out of the service.

Although proud to have been given the opportunity to be one, Asa didn’t feel like he had a significant role during his time with the Tuskegee Airmen. But this doesn’t take away from the overall impact he had and the changes he made in military history.

It wasn’t until the signing of Executive Order 9981 in 1948 that he decided to return to service. He joined the United States Air Force in June 1949 and reestablished his pilot career. He served 21 years, retiring at the rank of Lt. Colonel in June 1970.

During his military service, he served in England, Korea, Germany, Vietnam, and many other locations worldwide.

Asa flew more than 350 combat missions and served in both the Korean and Vietnam War. His decorations include the Distinguished Flying Cross, Bronze Star and Air Medal with 13 Oak Leaf Clusters.

“I flew accouple different airframes while I was in,” said Asa.

He was the first African American Squadron Commander at Luke Air Force Base, Arizona where he trained pilots in the F-104G Advanced Jet Fighter Gunnery Program. He was also officially appointed an honorary Command Pilot in the German Luftwaffe.

On March 29, 2007, Asa, along with 300 other Tuskegee Airmen, was presented a Congressional Gold Medal at the U.S. Capitol by President George W. Bush and Speaker of the House of Representative Nancy Pelosi.

To this day Asa is convinced his didn’t do anything out of the ordinary, but for those that know him and that have heard his story they know otherwise.

“I didn’t really do anything special,” he said very humbly. “I just did my job is all.”