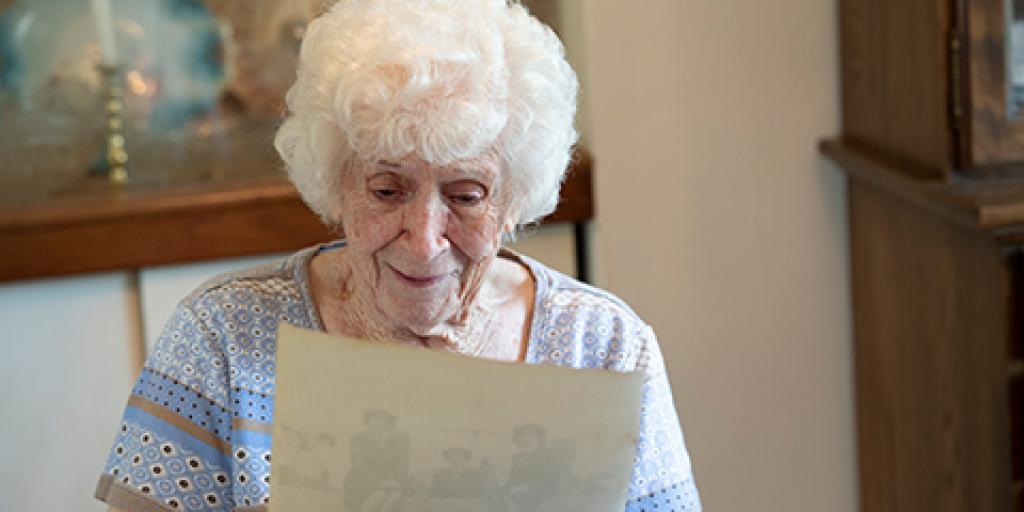 WWII Veteran Melva Dolan Simon looks at a photo of herself and two fellow Navy WAVES taken on a French ship docked in Philadelphia during the war.
By Liz Zemba, Writer/Editor
November 12, 2019

When the Navy called on women to volunteer for shore service during World War II to free up men for duty at sea, 102-year-old Melva Dolan Simon was among the first to raise her hand and take the oath.

"I went in so sailors could board ships and go do what they were supposed to be doing," said Simon, recalling her military service as "something different" in an era when women traditionally stayed home while men went off to war. "I helped sailors get on their way."

Simon was 25 years old in October 1942 and working as an office secretary at the former Hurst High School in Norvelt – a small Pennsylvania town named for Eleanor Roosevelt – when she joined the Navy's Women Accepted for Volunteer Emergency Service, or WAVES.

Simon was the first woman in her hometown of Bridgeport, Pennsylvania, to join the WAVES, according to a yellowed clipping of a 1942 newspaper article. She was also among the first in the nation to join the service – just three months earlier, on July 30, 1942, President Franklin D. Roosevelt had signed the law establishing the corps.

"I had a good job with the school, but I felt I would be doing more for my country by being in the service," said Simon.

The seventh of 12 children, Simon said she chose the Navy because several of her brothers were already serving in the Army, Air Force and Coast Guard.

"They were all enlisted, and I thought, well, what's wrong with joining the Navy?" said Simon. "I decided I wanted to go, and I was accepted."

"That's where we learned the basics of the Navy," said Simon. "We were trained to march, we studied hard, and they drilled into us how important what we were doing was."

After completing basic, many of the WAVES trainees spent another 12 weeks at the college for advanced training in secretarial duties.

From Oklahoma, Simon was assigned to active duty at the Philadelphia Naval Shipyard, which during World War II employed 40,000, built 53 warships and repaired another 1,218. She and her fellow yeomen earned anywhere from $50 to $125 in basic pay per month, depending on their rank, plus food and quarters allowance, unless provided by the Navy.

Simon said she was assigned to live on the all-female fourth floor of the Benjamin Franklin Hotel in Philadelphia, where WAVES personnel were under strict orders not to visit any other floors of the hotel – an order Simon said she followed.

"I didn't go on the other floors," said Simon, sternly. "It was none of my business."

Simon's military responsibilities included taking dictation from the officer in charge, performing clerical duties and driving officers around the base.

"They gave me a driver's license for the Navy, and I would drive these officers, sometimes just very short distances," Simon said, smiling as she motioned from her seat at a dining room table to the far side of her kitchen. "I thought that was interesting because it would have done them some good if they'd just walked."

Simon wrote letters home to her family at first, then sent her parents money to have a home phone installed. Home phones were a luxury at the time – Simon said before the phone was installed, her family used a telephone at a nearby store to call her.

"I sent them money every payday to keep the phone bill paid," Simon said. "It was much easier to call than to sit down and write, especially since I was writing all day at the office."

The phone also allowed her future husband, Joseph "Joe" Simon, to keep in touch with her. The two had met at the high school where Joe Simon worked as an agriculture teacher, and he'd visit with her when she was home on leave. They married in July 1945, just a few weeks before Melva Simon was honorably discharged from the Navy in August 1945.

The couple purchased a 22-acre farm in 1947 in Mt. Pleasant Township, Pennsylvania, where they supplemented Joe's teacher's salary by growing and selling sweet corn.

"It sold like hot fire because it was good sweet corn," Melva Simon said. "Then Joe planted apple trees, and that's what we decided to do."

The couple started an apple orchard – Simon's Apple Orchard – that remains family-run today. The orchard opens its doors to customers every fall, offering everything from pure sweet cider still made using the Simons' original recipe to bags of fresh McIntosh, Stayman, Rome, Jonathan, red and yellow delicious, and other apple varieties.

Still spry at 102, Melva Simon worked the orchard alongside her husband and took over when he died in 2004 at the age of 88. Up until just a few years ago, she drove tractors, harvested apples, made cider and worked the counter at a small shop on the property.

Blessed with a lifetime of good health, Melva Simon only recently discovered she is eligible for health care benefits through the Department of Veterans Affairs. With the help of her daughter, Melvajo Bennett, the World War II Veteran since August has received care through VA Pittsburgh Healthcare System's Westmoreland County VA Outpatient Clinic.

"It didn't dawn on her to go to the VA because she's always had such good health and never really had to see the doctor," said Bennett. "But they've been wonderful, with how they are treating her."

Asked for the secret to good health and a long life, Melva Simon gave a simple answer.

"There is no secret," she said. "All it takes is simple living. I eat simple food. I don't drink, and I don't smoke."

As for her military service, Melva Simon said she'd do it all over again.

"That was all I ever wanted to do, was to do something for the government and the country," she said. "I'd do it again."