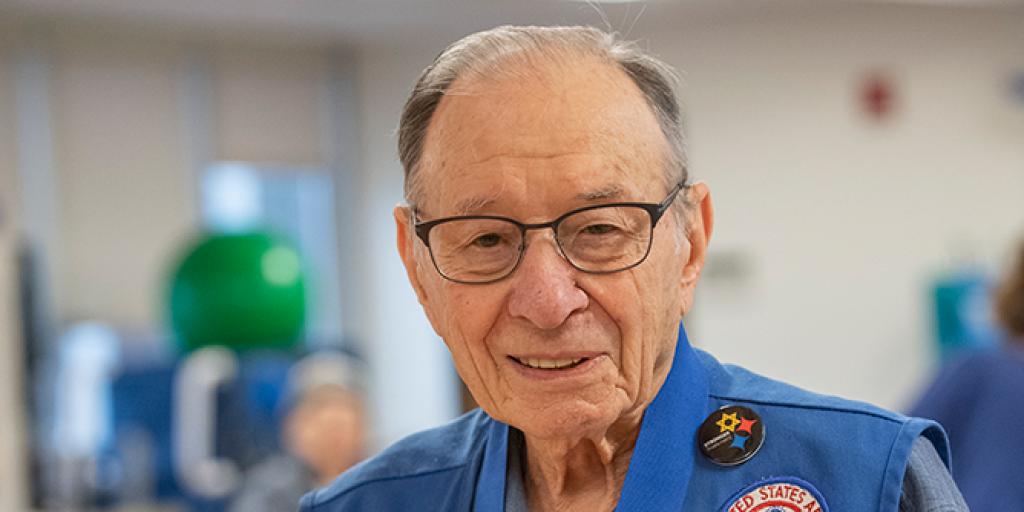 Over at least the last quarter century, volunteer Jacob (Jake) Notovitz of Wilkinsburg has been as much a fixture at VA Pittsburgh Healthcare System as the flags flying over each of the medical center's two main campuses.

Notovitz, 92, is a Korean War Veteran and volunteer escort at VA Pittsburgh's H.J. Heinz III campus. Although he acknowledges he may be slowing down a bit, he vows to serve as long as possible.

"It's just something I feel I need to do for the Veterans," he said. "I mean, otherwise I'd stay home and get fat."

As part of maintaining his active lifestyle, Notovitz also serves as the longtime commander of the Jewish War Veterans Post 499 of Pittsburgh. For the past 22 years during the week before Memorial Day, he led the post's volunteers in placing U.S. flags on Veterans' graves in Pittsburgh-area Jewish cemeteries. He's turning that sacred duty over to another volunteer this year, but he remains committed to helping decorate the graves.

Notovitz was among a group of members of the Pennsylvania Department of Military and Veterans Affairs who received Jefferson Awards in 2014. Jefferson Awards are given at the national and local level to individuals and entities who put others before themselves.

"I got it for volunteering at the SW (Southwestern) Veterans Center and was nominated by the volunteer coordinator there," said Notovitz. "I was there for 20 years and I got nominated there for the same things I do here. But I've been at VA Pittsburgh for 26 years."

Notovitz can't say for certain exactly how many years he has been volunteering, but he got started as a way to help one of his Veteran friends.

"I started with a friend of mine who was a post commander," said Notovitz. "He had a slight heart attack and asked me if I would come and help him here, and I've been here ever since."

Notovitz now wants to nominate VAPHS recreation volunteers Ed and Mary Connell for a Jefferson Award. He says for all they do, they are more than deserving.

Brad Krushinski, supervisor of the inpatient rehab clinic where Notovitz volunteers, has nothing but praise for him.

"He's a perfect example of the greatest generation," said Krushinski. "I have the utmost respect for him, and he serves as an example for everyone here."

Krushinski said Notovitz "exemplifies what I want to be like when I get older. He's always thinking about other people. It's just refreshing to have him in this clinic and be such an example. He's had such a great life and doesn't take it for granted."