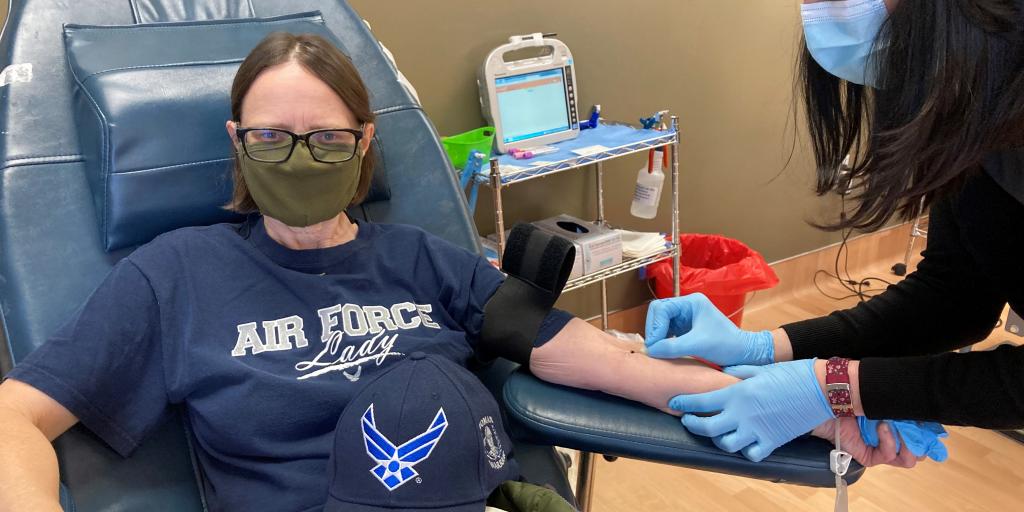 Army Veteran and Pennsylvania Air National Guard member Liz Zemba donates blood for the first time in over 30 years. Zemba was stationed in Germany from 1986-1990 and was previously ineligible to donate blood due to FDA guidelines preventing those from giving who had spent time on certain U.S. military bases in Europe.
By Hope Nelson
January 14, 2021

Were you ineligible to donate blood because of your military service in Europe? You may be eligible now.

In 2020, the U.S. Food and Drug Administration (FDA) lifted a longstanding ban that prevented some 4.4 million Veterans, service members and civilians stationed in certain parts of Europe between 1980 and 1996 from donating blood. The ban was meant to prevent transmission of a deadly brain disease commonly known as “mad cow disease.” The fatal disease is believed to be acquired by consuming contaminated beef. U.S. bases at the time sourced potentially tainted beef from the United Kingdom, where the disease was first recognized in 1985.

The FDA made the change after finding there have been no reported cases of the brain disease associated with time spent on U.S. military bases in Europe.

Army Veteran Elizabeth “Liz” Zemba is among thousands of former service members who for decades were told they could not give blood because they were stationed in Germany. Zemba is a technical sergeant in the Pennsylvania Air National Guard, but she previously served as a pharmacy specialist at the former 2nd General Hospital in Landstuhl from 1986 to 1990.

“I was surprised to learn I and other Veterans who had been banned from giving blood are now welcome to once again participate in this potentially lifesaving act,” said Zemba, who until now was last allowed to give blood in the mid-1980s. “I was happy to make my first appointment to donate again.”

Under the new guidelines, persons who had been ineligible because they resided for 6 months or more on U.S. military bases in Germany, the United Kingdom, Belgium and the Netherlands between 1980 and 1990 or on bases in Greece, Turkey, Spain, Portugal and Italy between 1980 and 1996 may now be eligible.

The deferral, however, is still in place for past or recent residency or travel in some European countries. For instance, FDA guidelines do not permit donation by individuals who have spent 3 months or more cumulatively in the United Kingdom from 1980 to 1996.

Two national blood donation centers list eligibility details on their websites: Vitalant and the American Red Cross. Vitalant also welcomes donors to call their medical helpdesk to speak to a registered nurse about eligibility at 412-209-7035. Vitalant anticipates the change will help ease blood shortages due to the COVID-19 pandemic.

“There is an urgent need for blood, platelet and convalescent plasma to provide to area hospitals, so we hope these new FDA guidelines result in previously ineligible individuals coming to donate,” said Kristen Lane of Vitalant. “COVID-19 continues to significantly impact blood drives and has put a strain on the blood supply.”

Lane said all blood types, especially type O, are needed to help ensure patients continue to have the blood they depend on for surgeries and ongoing medical treatment.

Robert Johnson, an Army Veteran now living in Missouri, retired from active duty after serving in multiple locations, including overseas during the late 1990s to early 2000s.

“I always gave blood when I could as a soldier,” said Johnson, who served in Europe from 1995 to 2002 and then was stationed in South Korea before returning stateside.

“So when I was a drill sergeant at Fort Leonard Wood in 2005, I was told that if anyone was stationed in these two places there was a hiatus or wait period on blood donations. I need to start back to doing that again.”

Zemba, who made an appointment to give blood the day after learning she was eligible again, encouraged her fellow Veterans to roll up their sleeves in service to others.

“Giving blood is another chance to serve,” said Zemba. “If you are eligible, consider donating. You could save a life.”

To check your eligibility:

Writer’s note: You can donate blood during VA Pittsburgh Healthcare System’s virtual blood drive with Vitalant now through Jan. 23, 2021. For details, see VAPHS Virtual Blood Drive.  For more information on the FDA’s decision to lift the blood-donor deferral, download “Recommendations to Reduce the Possible Risk of Transmission of Creutzfeldt-Jakob Disease and Variant Creutzfeldt-Jakob Disease by Blood and Blood Components.”