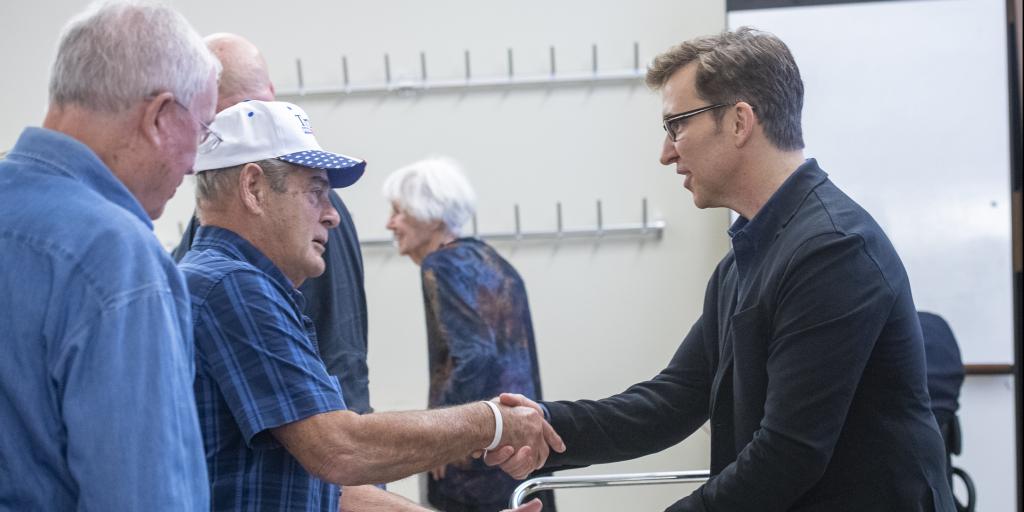 More than 100 stroke survivors, their families and health care providers listened as Baxter shared his story of regaining his communication and physical abilities.

Baxter had his stroke while watching TV after a hectic London business trip in 2005. His wife kept asking him the same question, he said, but he couldn't "formulate an answer, everything went blank." Though they sought immediate medical attention, Baxter lost the power of language and right-side mobility.

"I spent 10 days in the hospital and eight weeks in rehab — just to learn the basics…I focused on two seemingly simple things: physical mobility and speech," Baxter said.

His communication problems came from aphasia, a condition that impairs one's ability to understand, speak, read and write.

"I took on every opportunity," Baxter said. "Time is brain. The longer you wait to start rehabbing, the harder it is for it to return."

In 2018, Baxter published "Relentless: How a Massive Stroke Changed My Life for the Better," a book detailing his journey after his stroke. In it, he also writes about his recovery and how his stroke changed his life priorities.

Baxter's story and advocacy for stroke survivors are both reasons VA Pittsburgh invited him to speak.

Strokes are a major concern for Veterans, especially males, who have an 81% higher risk of stroke than their non-Veteran male counterparts, according to Dr. Patrick Doyle, founding director of VA Pittsburgh's Program for Intensive Residential Aphasia Treatment and Education (PIRATE).

"We have an exceptional aphasia recovery and research program here," Doyle said. "More than 158 Veterans from 34 states have gone through it. Having Ted share his philosophy, recovery and advocacy efforts will only motivate and give hope to our Veterans — and others -- who are recovering from a stroke."

"People need to know that recovery from aphasia can occur for years following its onset given targeted and intensive intervention," Doyle said. "PIRATE is the only intensive treatment program for aphasia in the VA system and one of only a handful in the U.S."

"One of our goals is to show that aphasia treatment has the possibility to bring someone with severe aphasia up to the level of what Ted is doing. We applaud him," Doyle said.

Further goals, Doyle said, are to reduce the incidence of stroke through public awareness and education regarding key risk factors, improved self-management of hypertension, cholesterol and smoking.

After his presentation, Baxter led a Q&A with Doyle and Dr. Audrey Holland, a noted aphasiologist and Doyle's graduate school mentor.

Baxter finished his presentation by giving out 70 signed copies of his book to survivors and providers, all purchased by the VRFP.