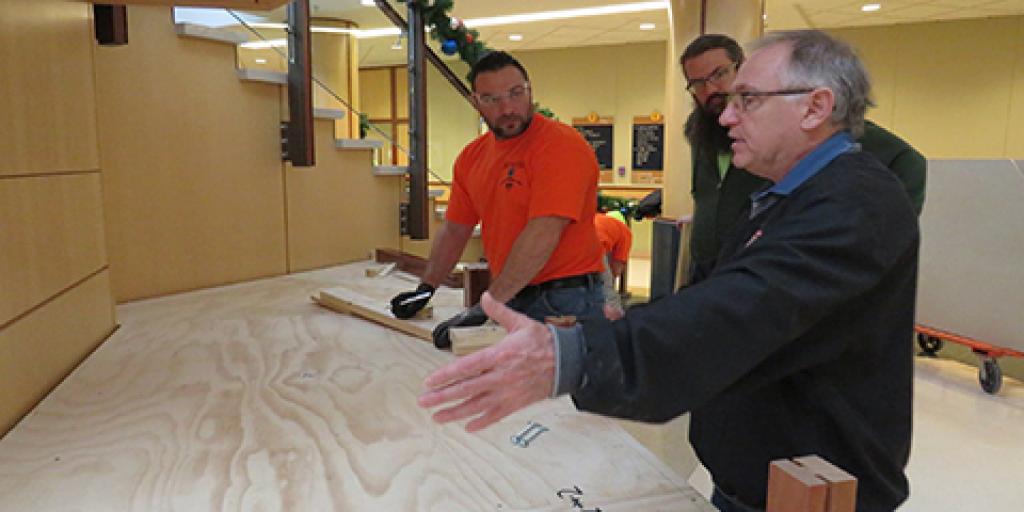 Apprentices from the Carpenters Training Center in Pittsburgh installed a platform for the Lionel train display at H.J. Heinz III on Nov. 28. The trains are scheduled to be installed in February.
By Sheila Tunney, Public Affairs Specialist
December 11, 2018

Twelve apprentices from the Carpenters Training Center in Pittsburgh installed a platform for the Lionel train display Nov. 28. The platform, which wraps around the base of the grand staircase in building 71, was constructed off-site at the training center over the past several months and has craftmanship from more than 40 apprentices.

"When I heard about it, I made sure I tried to volunteer for it," said Navy Veteran John Stubenraugh, a commercial carpentry apprentice. "It's always nice to come back and be able to do something for fellow Veterans."

Stubenraugh is one of three Veterans working on the installation, which will include trains, scenery and ceramic houses created by Veterans who reside at Heinz.

"When this work was brought up (to the students), we heard 'I'd like to go to that.' There were a lot of volunteers for the project," said Rich Paganie, an instructor at the center, which operates under the auspices of Keystone Mountain Lakes (KML) Regional Council of Carpenters.

The project, Paganie said, was welcomed with enthusiasm by his students. He credited them for stepping up and showing leadership qualities during the work.

The platform construction and installation extends KML's volunteer service to Veterans. For the past three years, KML apprentices and journeymen have installed exterior Christmas decorations at the Heinz campus.

The train display will be permanent. Seasonal and holiday variations are expected, according to Ed Connell, American Legion Post 145, Crafton, who will set up the trains in the coming weeks.

The project got moving, Connell said, after VA Pittsburgh staff members attended construction safety training at the carpenters' center. Through conversations, design and planning, the two organizations created both a new home for the trains and a learning and service project for students.

The set belongs to VA Pittsburgh and has been in storage since major construction at Heinz more than 10 years ago. Before then, Connell said, it was displayed during the holidays in the old ceramics studio. Pieces for the train set were donated by many organizations and volunteers over many years, he said. Connell is an Air Force Veteran and has volunteered at VA Pittsburgh for more than 25 years.

"I've been after the VA to resurrect this to pay homage to our Veterans. When (the carpenters) came on board it blossomed, it was just simply fantastic to get it all done like this," Connell said. "It's going to be a win-win situation for the Veterans and the VA. People come in here and see this and know that their loved ones had a part in this. It's simply amazing."